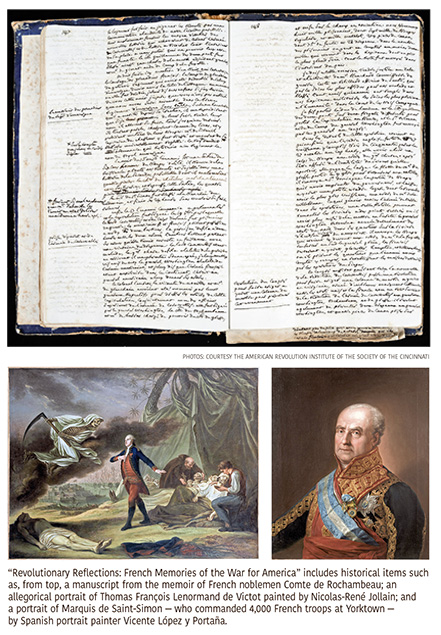 Eight French officers traveled across the Atlantic to fight in the American War of Independence. Along the way and back at home, they wrote down their recollections and impressions of the war and this new country in letters, diaries and memoirs — and this summer, Washington can relive it all in a new exhibition.

“Revolutionary Reflections: French Memories of the War for America” is a small exhibition that packs a definite academic punch. The primary source documents on display here are impressive, and these firsthand reflections are accompanied by an array of medals, portraits and prints that bring alive an uncertain time in American history.

The show, set in a room at the Anderson House, an opulent Gilded Age mansion in Dupont Circle, is largely drawn from the American Revolution Institute of the Society of the Cincinnati’s collections. Often the American’s War of Independence is heavily mythologized, and this exhibition helps strip that away — and remind visitors that it was a much broader international conflict than the name suggests.

The exhibition also explores how these officers’ American experience impacted their perceptions of the turmoil in their country’s own subsequent revolution just six years later. “I feel that liberty will ultimately be established in the old as well as in the new world, and that then the history of our revolutions will put all things and all persons in their proper places,” the exhibition quotes from the memoir of the Marquis de Lafayette.

“Revolutionary Reflections” stems from the strength of the institute’s collection, curator Emily Schulz Parsons said. In the last decade, it acquired a number of the journals and even some of the portraits on display, she noted, and “we knew we had this richness of material about these French officers and what their service here meant to them.”

“[Out of] six of the eight journals we have that are in original manuscript form, we have five of them in our collections and one of them is on loan from the family in France. That was really the core of the exhibition and our starting point,” she told The Washington Diplomat.

Alongside each of the written French works, visitors can see portraits of the officers themselves.  On display are masterpieces by the French artist Jean-Baptiste Greuze and Spanish portrait painter Vicente López y Portaña, among other works.

“It’s obviously an exhibition about the French experience, but there are threads in here for those who ended up in Spain after the war, there’s an Irish connection, some of the regiments that they were serving in ended up with German soldiers in them as well,” Parsons said.

The Spanish portrait is one of the highlights of the show, and a fascinating story in its own right. A depiction of the Marquis de Saint-Simon — who commanded 4,000 French troops at Yorktown, but as a royalist, moved to Spain in 1792 — it was put in deposit at the Prado Museum for safekeeping during the Spanish Civil War. “And then somehow it lost the identity of who he was. When we acquired it, the dealer we acquired it from had literally just found out who he was in the last year or two. Before that, it was published in the 1990s in a catalogue of the artist just as an unknown general. So the painting’s had an extraordinary life,” Parsons noted.

“And after we acquired the painting and really dove into his story, we learned that a member of the society who represents him, who’s a descendant, owned his journal. It had never been published, never been displayed in America, and he was generous enough to send it for display here so we were able to join them together for the first time probably since Saint-Simon died,” she added.

The small but memorable show revels in other remarkable moments. Back in July 1782, the French army camped on the very site of the Anderson House as the 4,000 men were marching back up to Boston from wintering in Virginia. This July, Anderson House will host an evening with champagne and history to commemorate that event.

Throughout the exhibition, there is an excellent mix of portraiture, original documents and helpful informational text, especially necessary for those who can’t read French (or late 18th century and early 19th century French handwriting). But the artistic highlight is the allegorical portrait of Thomas François Lenormand de Victot by Nicolas-René Jollain, painted in 1783. Lenormand died in April 1782 as he was serving in Admiral de Grasse’s fleet in the Caribbean. In the painting, Death in the form of a skeleton swoops in, covered in a sheet and bearing a sickle. It’s a vividly wrought, wonderfully strange image that is worth the visit alone.

Revolutionary Reflections: French Memories of the War for America

through Oct. 27
American Revolution Institute of the Society of the Cincinnati
2118 Massachusetts Ave., NW