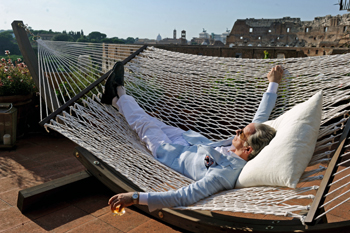 Italian actor Toni Servillo plays a disenchanted playboy who searches the streets of Rome for meaning in “The Great Beauty.”

“The Great Beauty,” the latest from Italian writer-director Paolo Sorrentino (“Il Divo,” “This Must Be the Place”), has been consistently compared to “La Dolce Vita,” Italian auteur Federico Fellini’s 1960 masterpiece typically regarded as one of the top films of all time, for their broad structural similarities in story and character. Does “The Great Beauty” live up to all the hype? Well, only time will tell its place in cinematic history, but it’s safe to dub it a must-see film of the year.

For some four decades, Jep has ridden the reputation of his first and only novel, the award-winning “The Human Apparatus,” making a lucrative if intellectually undemanding career as a reporter. These days, he’s really famous for being famous and traveling in high circles, kind of like an elder Italian Paris Hilton. In the Roman era defined by Silvio Berlusconi’s domination of politics and media, the resilient players stay in the game of endless social events, parties and nightlife well into their 70s, with the fountain of youth replenished by plastic surgery.

Around Jep’s distastefully lavish 65th birthday party, a stranger appears at his door with a surprise from the past, leading Jep to look back at his life, his loves, his accomplishments and his unfulfilled promise.

Increasingly, Jep becomes openly disdainful of the faults of his peers. He develops self-awareness of his own flaws as well, but he doesn’t know how to change them. He slips into an ephemeral romance with an over-the-hill stripper, Ramona (Sabrina Ferilli), drawn to her straightforwardness, until he finds she’s just as shallow as his socialite friends. He wanders around his beloved city of Rome looking for … something.

He also wonders where all the time went — and if there’s more to life beyond his fundamentally insubstantial existence, searching unsuccessfully through nightlife for “la grande bellezza,” or the great beauty. 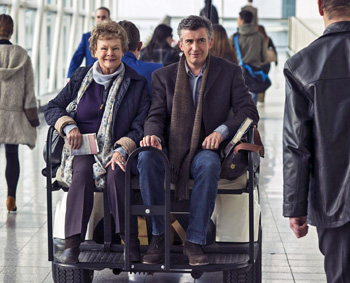 Steve Coogan, right, is a BBC reporter who helps a mother, played by Judi Dench, find the son who was taken from her in “Philomena.”

Based on a true story, the poignant comedy-drama “Philomena” marks a return to form for versatile, veteran British director Stephen Frears, whose career has spanned films made in Britain, Ireland and Hollywood (“The Queen,” “Dirty Pretty Things,” “High Fidelity,” “Dangerous Liaisons”). The smoothly intelligent screenplay, adapted by lead actor Steve Coogan and Jeff Pope from BBC reporter Martin Sixsmith’s 2009 book, “The Lost Child of Philomena Lee,” includes witty dialogue and elements of humor that lighten up the dark tale. Coogan and Dame Judi Dench, a living legend, shine as an odd couple who find common ground to work and grow together.

Now a senior citizen in her 70s living in London, Philomena Lee (Dench) confesses to her daughter that as a teenager, she became pregnant outside of marriage and was banished by her Irish-Catholic family to a Magdalene convent, where she was forced into four years of slave labor and cruelty, seeing her baby for only one hour per day. When her son was 3, he was suddenly taken away for adoption by an American family before she could even say goodbye.

Aware that her son has turned 50, Philomena wonders about him and yearns to track him down. She encounters Martin Sixsmith (Coogan), a former BBC reporter turned fallen political spin doctor who’s looking to get back into journalism to earn a buck. Though he’s disdainful of “human interest” stories, Philomena convinces him, a fallen-away Catholic, to help her find her son in an epic quest that takes them to Northern Ireland and Washington, D.C., over five years.

Though its world premiere was a critical favorite at the 70th Venice Film Festival, “Philomena” lost the Golden Lion to Gianfranco Rosi’s documentary “Sacro GRA,” and Dench didn’t claim the Best Actress prize many anticipated for her. “Philomena” did take home the Best Screenplay trophy for Coogan and Pope as well as a bevy of collateral awards.

For the U.S. Academy Awards, expect “Philomena” to be a major competitor for the top categories, backed by the full force of the Weinstein Company’s notorious Oscar campaign machine.

Oscar-winning American director Jonathan Demme is best known for his narrative features (“The Manchurian Candidate,” “Silence of the Lambs”, “Philadelphia”), in which he often coaxes career-changing performances out of Hollywood movie stars. Yet he’s also put together an impressive nonfiction body of work (“Jimmy Carter Man from Plains,” “The Agronomist”), for which he was honored at the 2007 Guggenheim Symposium of Silverdocs, the American Film Institute’s annual documentary festival.

Enzo is pretty much anonymous in the United States even though he’s played with the likes of James Brown and Tina Turner, as he recollects on screen. In contrast, he’s a major celebrity in his native Naples, where crowds gawk when he visits Marianella, the impoverished area in northern Naples where he grew up.

Enzo has gathered well-deserved acclaim for his frequently experimental work, a unique fusion of jazz and world music, including Neapolitan, Arab, African, South Asian, Latin, and American rhythm and blues influences. He delightfully demonstrates his favorite software that makes composing music much easier, enabling him to play his compositions even when a critical mass of fellow musicians is not readily available.

In his music documentaries, Demme’s direction tends to be more observant than critical. As the helmer follows his main subject around, the audience learns some interesting random tidbits about Enzo’s life story, but we are left wanting to dig deeper. Fortunately, Enzo’s loquaciousness, energy and musical talents are deep in abundance.

Buy your tickets early to the perennially popular 26th annual AFI European Union Film Showcase (Dec. 5-22), which returns to the American Film Institute (AFI) Silver Theatre with more than 50 films from EU member countries. The EU showcase is presented with the support of the cultural officers of the D.C. embassies of EU member states as well as EU Ambassador João Vale de Almeida and his staff.

Regular screenings include the following, ordered by country:

• Finland: Ulrika Bengts’s “The Disciple (Mon., Dec. 9, 7:10 p.m. screening is followed by a Q&A with director Bengt and a reception sponsored by the Embassy of Finland)

• Greece: Judith Kaufmann’s “The Daughter”; Yorgos Tsemberopoulos’s “The Enemy Within”

• Sweden: Per Hanefjord’s “The Hidden Child”; Lukas Moodysson’s “We Are the Best!”


In the illustrated lecture “Viewing History Through the Filmmaker’s Lens” (Sun., Dec. 1, 2 p.m.), Polish filmmaker Agnieszka Holland talks about her most recent narrative feature, “In Darkness,” and her HBO Europe miniseries “Burning Bush,” followed by the D.C. premiere of “Burning Bush” (Sun., Dec. 1, 3:30 p.m.), presented with help from the Embassy of Poland and the Embassy of the Czech Republic.