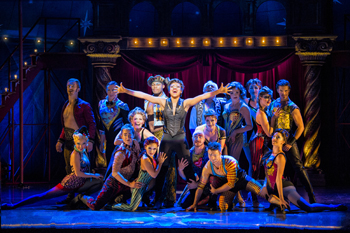 Sasha Allen and an all-star cast present a circus-inspired production of the Broadway classic “Pippin” at the National Theatre.

“Pippin,” the classic musical that made its Broadway debut in 1972, is getting an inventive makeover. While the original production combined medieval sets and costumes with themes of sexual experimentation and political upheaval, this new version is Cirque du Soleil meets Broadway.

Winner of four 2013 Tony Awards, including Best Musical Revival, the production is set to hit D.C.’s National Theatre over the winter holidays and is part of the musical’s first national tour that began in September. Directed by Diane Paulus (who also directed “Hair” and “Porgy and Bess”), “Pippin” features an international cast with performers from Canada, Argentina, Germany, Ireland and Poland.

The new addition — breathtaking acrobatics by the Montreal-based circus company Les 7 doigts de la main (also known as 7 Fingers) — might not be as far-fetched as it seems on the surface, says one of the show’s main acrobats, Preston Jamieson. The addition of gymnastics is in keeping with the original focus of the plot, he told The Diplomat.

The musical follows Pippin, a young prince, as he spends his days desperately searching for his identify and trying to find fulfillment and purpose in his self-imposed chaotic life. The story uses the premise of a mysterious performance troupe, led by a Leading Player (originally made famous by showman Ben Vereen), to tell the story of how Pippin kills his father, King Charlemagne, leader of the Roman Empire, for being a tyrant. Pippin comes to woefully regret his tragic decision and spends most of the play trying to undo his mistake while searching for some sort of direction in his life.

According to Jamieson, the play has two interpretations: one literal, the other figurative.

The literal reading is that Pippin is being welcomed into the performance troupe as a way to find himself. Acrobatics, then, are a part of his initiation. The figurative explanation (the one Jamieson believes) is that Pippin’s trials and tribulations are part of a surreal dream. In this case, the circus-inspired version merely takes Pippin’s internal conflict to another level. Because his journey takes many, sometimes risky, twists and turns along the way, it makes sense for his psychological struggle to be portrayed as physical contortions.

“He’s defying gravity, experimenting with edgy possible expectations and outcomes,” which translate into daring physical feats, Jamieson muses. Although Pippin’s ethereal journey might only live in his twisted psyche, his toils are so real that they manifest outside the mental and into the physical realm.

Canadian-born Jamieson, who performed in the Broadway production and is part of the national tour, portrays the character of the Leading Player in the performance troupe. He grew up dancing but transitioned into the circus world, graduating from Quebec’s L’École nationale de cirque (National Circus School) in 2009. Afterward, he spent four years performing for Cirque du Soleil, which included a performance in the 84th annual Academy Awards.

In this production, Jamieson is lucky enough to be performing alongside his wife and fellow acrobat, Kelsey Jamieson. Like Preston, Kelsey started her career as a dancer. The two met while attending the National Circus School, where she studied the discipline of “hand to hand,” an acrobatic skill that involves partner lifts and hand balancing. Along with Preston, she has performed for Cirque du Soleil, Les 7 doigts de la main and Cirque Éloize.

Preston describes meeting Kelsey “doing pas de deux [a ballet dance duet] and dance lifts.” In this production, at one point she jumps off a 15-foot platform into his arms, and in another instance, Preston literally balances Kelsey on his head. “This brings trust in a marriage to a whole new level!” he quipped.

The trained acrobats aren’t the only ones involved in the daredevil stunts. “Even the leading actors get in on the action, throwing swords, riding unicycles, hula hooping and even flying on the trapeze” during this two-and-a-half-hour extravaganza, says a press release from the show, citing the use of six yoga balls, 15 hula hoops, and 10 swords in the production.

Turning an event “into a circus” doesn’t always have a positive connotation. However, in this case, it seems to work.

According to Deborah Walk, curator of collections for the Ringling Museum of Art, “There’s something thrilling about seeing things live. There is that immediacy, the electricity in the air, the idea that real people are doing real things in real time,” she said in an interview with PBS. “The ring is primitive and embedded into our psyche…. Comedy is the root of our humanity, and the circus pulls these constantly enduring elements together.”

The latest iteration of “Pippin” brings this sentiment home — one twist, turn, leap, roll, spin and handstand at a time.