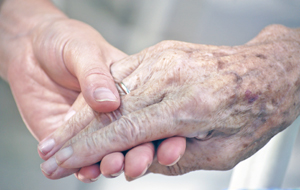 My father spent most of his adult life fighting to live as independently as possible. Diagnosed with polio when he was 20 years old, he went from running touchdowns for his undefeated high school football team to struggling for every step, walking with a brace on one leg for decades until he finally had to consent to a wheelchair in his 60s.

The blows continued: a congestive heart failure diagnosis at 65; my mother’s diagnosis with dementia at 70. Despite it all, Dad was determined to live the rest of his days in the house that he and Mom had bought three years after they were married and cherished for more than 40 years. He did it, too, concocting Rube Goldberg contraptions to get his wheelchair into and out of his car without help, and doggedly tending his more than 150 rose bushes every summer.

But then a procedure to replace his implantable defibrillator weakened him and sent him to the hospital for a week. After more than a decade with congestive heart failure, his heart was badly weakened. It was clear he didn’t have long to live, although the doctors disagreed about just how long “not long” was. He couldn’t live independently at home anymore, even with a home health aide. Their recommendation: transfer him to a nursing home to receive skilled care for the rest of his life.

We said no. Dad wanted to die at home. His primary care physician argued against hospice care, saying that he wasn’t sure Dad had less than six months to live (generally considered the criterion to qualify for hospice care at home). We pushed back. Finally the doctor agreed to recommend hospice.

Dad went home on a Monday, with the help of expert hospice nurses. He died that Wednesday, in his own bedroom, surrounded by the memories of a lifetime instead of the strange smells and sounds of a nursing home or a hospital. Would he have lived longer in one of those settings? Maybe. But it would have been contrary to everything he wanted. And it would have cost thousands of dollars a month, for however long he was there, just for him to be miserable and wait to die.

Hospice care is a subject that’s widely misunderstood and largely avoided until it’s too late. But it’s a valuable resource that has provided dignified care for millions of Americans.

According to the National Hospice and Palliative Care Organization, an estimated 1.5 million to 1.6 million patients received hospice care in 2012. Hospice services are often covered by insurance and can be given in a patient’s home or a separate facility (such as nursing homes). Yet a National Hospice Foundation survey found that 75 percent of Americans don’t know that hospice care can be provided at home, and 90 percent don’t realize that Medicare pays for it.

Support for hospice care is also coming from an unlikely quarter: hospitals, which are often inadvertently relied on for end-of-life care better suited to hospices.

A new study from Johns Hopkins underscores the price of avoiding hospice and choosing hospitalization at the end of life. This study, published in February in Lancet Oncology, focused on metastatic cancer patients rather than people with heart failure, but the lessons are similar.

The Johns Hopkins team says studies show that hospice care improves symptoms, helps caregivers and costs less, with equal or better survival for patients. Yet many cancer patients fail to take advantage of this option.

They note that Medicare data show that 60 percent of poor-prognosis cancer patients are admitted to a hospital in the last month of their lives, and 30 percent of these patients die there — with only about half using hospice care. “Most people prefer to spend their last days of life at home with family and friends rather than in a hospital, but we still see high rates of hospital utilization in the last month of life,” said lead author Dr. Thomas Smith, from Hopkins’ Sidney Kimmel Comprehensive Cancer Center.

Hospice isn’t perfect. A Washington Post investigation last year found that private, for-profit hospices make it a practice to maximize their bottom line by recruiting patients who aren’t actually “dying” — which may explain why my father’s doctor was initially reluctant to certify him for hospice.

Nonetheless, overall studies have shown that hospice care offers patients better care at significantly lower costs, helping them avoid unneeded and expensive treatments and tests. In fact, Johns Hopkins researchers say the biggest opportunities for safe and ethical cost-cutting solutions lie in caring for patients with metastatic cancer, not on new surgical or radiation treatments, clinical trials, curative care or pediatric care. They note that 25 percent of total Medicare costs are spent in the last year of life, with 40 percent of that spent in the last month of life.

In a paper that appeared in Health Affairs in March 2013, researchers from the Icahn School of Medicine at Mount Sinai found that increased enrollment in hospice could save Medicare as much as $6.4 million annually if 1,000 additional Medicare beneficiaries chose to enroll in hospice shortly before death — with higher quality care for patients and their families.

“We know that hospice care addresses so many critical issues involving quality of care at the end of life and that hospice brings dignity and compassion when they are needed most,” said J. Donald Schumacher, president and CEO of the National Hospice and Palliative Care Organization, in response to the Mount Sinai study. “This study reaffirms other reasons why hospice is the best solution for caring for the dying in a way that provides patient-centered care and is cost effective for the Medicare system.”