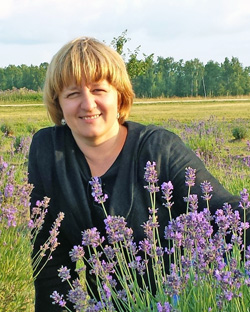 She was trained in Lithuania as a doctor — just like her mother, grandmother, grandfather and aunts were. “It’s a real dynasty,” said Lina Pavilioniene, wife of Lithuanian Ambassador Žygimantas Pavilionis.

Although she has taken a break from medicine while in Washington, Pavilioniene still gets plenty of practice with minor cuts and bruises as the mother of four boys.

In fact, Pavilioniene is busy rearing two different “batches” of boys. “Our youngest is 5, the next is 9, and the two older boys at McLean High School are 18-year-old Augustas and 16-year-old Dominykas.”

But when it comes to parenting, this diplomatic posting is nothing compared to a stint the couple did in the beginning of her husband’s career. “When we went to Brussels, it turned our lives upside down. At the time, we had a 2- and a 4-year-old. It was our first time abroad, we didn’t speak French, had no help, and my husband’s position was not high,” Pavilioniene recalled.

Although having four sons of such varied ages seems “normal” now, she notes that, “In Soviet times, we were not used to large families. Four kids were not usual.”

In fact, the former Soviet Republic has a fairly progressive reputation when it comes to women occupying top positions of power. “Our president is a woman, so is the speaker of the parliament, many members of parliament, and cabinet members and even the minister of defense,” Pavilioniene said. “My mother is still working as a doctor in internal medicine.”

But Pavilioniene says she needed to take a break from practicing medicine. “My kids are still too small for me to start my own life. I’ve had to compromise now.”

With four boys in different grades going to all kinds of different events, she doesn’t have much time to herself and usually can’t leave the children in the evenings to attend diplomatic receptions. “I don’t have very much time to be involved with organizations either,” she admitted, “but I love my International Club. My time is always limited.”

On the weekends, she and her husband go to the C&O Canal, Great Falls or to Vienna, Va., for some Nordic walking. “That’s walking with poles,” Pavilioniene said. “Round trip on the Old Dominion Trail gives us three to four hours outside.”

For vacations, they enjoy long car trips to experience America. “We love your national parks,” she said, noting that the older boys are tremendously helpful with their younger brothers. “They are really friends.” 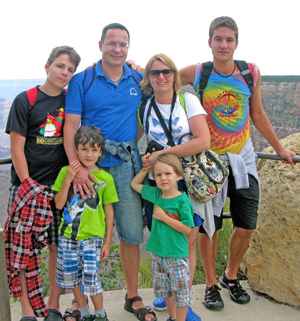 She and her husband, in fact, belonged to the same group of friends as teenagers growing up in their hometown of Vilnius, Lithuania’s capital. Their friendship matured by the time they were in Vilnius University, where she studied medicine while he pursued his master’s degree in philosophy and doctoral studies in international relations.

According to Pavilioniene, her husband’s fast rise in the Foreign Service is emblematic of their young country’s rapid evolution since it broke away from the Soviet Union in March 1990, a year before the formal collapse of the Iron Curtain. Three years after Lithuania’s independence, her husband joined the Foreign Service and was instrumental in securing the country’s eventual membership into NATO and the European Union. Pavilionis later served as undersecretary of the Ministry of Foreign Affairs; coordinator for the Lithuanian presidency of the Community of Democracies; and ambassador-at-large for the Transatlantic Cooperation and Security Policy Department.

Pavilioniene is proud that her Baltic country, in the same neighborhood as Latvia and Estonia, was the first Soviet Republic to break free from Moscow. Given the Baltics’ tortured history with their powerful neighbor and one-time occupier, Pavilioniene said she is concerned about the creeping Russian takeover of Ukraine.

“Personally, we don’t have any friends in the Ukraine,” she said, “but we are very worried. Ukrainians are our neighbors. They have always been very good in relationships of understanding.”

Lithuania, the southern most of the three Baltics, is also the largest and the most populated. With a population of 3.5 million and per-capita income of $22,600, the country enjoyed 3.4 percent economic growth last year as it steadily recovers from the 2008-08 financial slump.

Besides these statistics, it is interesting to note that the Lithuanian language is the oldest surviving Indo-European language in the world — one that 4 million people speak around the globe.

A wave of Lithuanians left the country starting in 1940, when it was occupied first by the Soviet Union, then Nazi Germany, and then again by the Soviets.

Many fled to the United States, where Pavilioniene says the Lithuanian community is strong and vibrant. She notes that Lithuanians, wherever they live in the world, try to enroll their children in “Lithuanian school” on Saturdays. That way, the younger generation learns the language, geography, native songs, dances and stories of their homeland. Here, the Lithuania school is located in Rockville, Md. 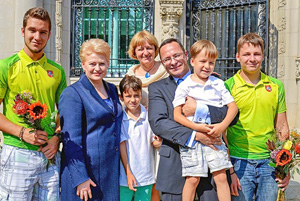 Lithuanian President Dalia Grybauskaitė, second from left, poses with Lithuanian Ambassador Žygimantas Pavilionis, his wife Lina Pavilioniene and their four sons during a D.C. visit. “Our president is a woman, so is the speaker of the parliament, many members of parliament, and cabinet members and even the minister of defense,” Pavilioniene says.

In Lithuania, as in much of Europe, university is free or not expensive. As for boarding fees, Lithuanian university students usually live at home with their parents, grandparents and sometimes even their great grandparents.

“The family builds the house and they live in it for three to four generations,” Pavilioniene said, noting that she was shocked to learn how pricey school is in the United States, especially in comparison to home. “Here, preschool can be like the price of college,” she said, adding that working women in Lithuania also enjoy much longer maternity leaves than American women do.

Despite the cultural differences, Pavilioniene said the bonds between Lithuania and the United States run deep.

One point of pride is how Washington continued to diplomatically recognize Lithuania’s embassy long after the Soviets took control of the country. “From 1940 until 1990 it was like ‘ghost embassy,’” Pavilioniene said. Nevertheless, it remained a symbol of Lithuania’s longstanding aspirations for freedom — supported by the United States. “We celebrate this year 90 years of our embassy’s work,” Pavilioniene said with obvious pride.