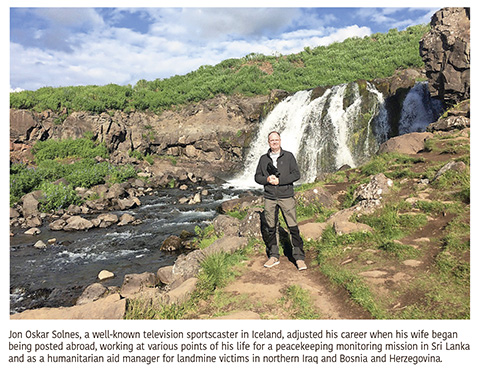 Jon Oskar Solnes can certainly be described as a jack of all trades. He has been a television sportscaster; foreign news editor; press and information officer; a bank research editor; a chief of staff for a peacekeeping monitoring mission in Sri Lanka; a humanitarian aid manager for landmine victims in northern Iraq and Bosnia and Herzegovina; permanent delegate for a confederation of Icelandic employers analyzing EU socioeconomic and financial regulation; senior advisor for media analysis at two of NATO’s highest organizations; a consultant; and a two-time author.

But perhaps his most important role has been as a supportive husband to his wife Bergdís Ellertsdóttir, Iceland’s recently appointed ambassador to the U.S.

“When my wife was first sent abroad to Bonn, I thought I’ll try it, so I gave up my broadcasting job, which I loved,” he said of adjusting his career to accommodate his wife’s and the needs of their growing family.

That included taking on another job: stay-at-home dad — or, as he calls it, “Mr. Mom.”

“Our first daughter was only one and a half then [in Bonn] and I thought I could help. Our second daughter came shortly thereafter. There was a period in Bonn when I took the baby down to the embassy two or three times a day so my wife could breastfeed her,” Solnes recalled.

The couple also eventually had two boys. In between his parenting duties, Solnes earned a master’s in management and finance from Boston University (in association with the Free University of Brussels) and a master’s-level diploma in financial strategy from the University of Oxford. Today, the girls, Salvö and Katla, are in their 20s while the boys, Hjalti and Sturla, are teenagers.

“We had two girls first and then, 10 years later, two boys. I found that bringing up girls was totally different than bringing up boys. One thing that is especially nice about the boys is that we have more sports in common. I am a skier and so are they, but I wonder this winter if they’re going to out-ski me at Snowshoe,” he said, referring to the popular ski mountain resort town in West Virginia.

Solnes had been a well-known TV sportscaster in Iceland covering international events as the Seoul Summer Olympics in 1988 and the 1990 FIFA World Cup in Italy for Icelandic National Broadcasting Service (known as RÚV). Then he became the network’s foreign news editor, traveling abroad to cover major conflict areas as the former Yugoslavia and Somalia.

Next, he became a research editor for a major Icelandic bank, writing English language information bulletins for international subscribers and investors. “But I didn’t like the bank that much…. It wasn’t exciting. All anyone talked about, thought about, was money,” he said. “This was before the economic crash.”

The subject of money was then on everyone’s minds in 2008, when Iceland experienced a crippling financial crisis in which three of the country’s major privately owned banks defaulted, leading to a severe economic depression that lasted for several years.

Since then, however, the country has managed an impressive recovery, with steady economic growth fueled in part by a major increase in tourism.

In fact, part of Iceland’s economic prosperity owes to its progressive social policies on gender equality, which has led to greater participation of women in the workforce — including the political sphere, with women comprising half of parliament.

The Icelandic ambassador’s own diverse diplomatic career is emblematic of how advanced this nation of just over 350,000 people is when it comes to women’s rights. Among her various postings, Ellertsdóttir has served as ambassador to the European Union and to the United Nations; foreign affairs advisor to the prime minister; chief negotiator for the Iceland-China Free Trade Agreement; and deputy director of the Ministry of Foreign Affairs Political Department dealing with security issues, NATO and bilateral relations with the U.S., Canada and Russia.

While Solnes’s various career moves have also given him a range of experiences, he’s frank about the sacrifices he’s had to make to follow his wife.

“I took a great risk in resigning from the television job I loved. I went from being known all over Iceland to hardly ever being known and only recognized as the husband of my wife,” he said.

A couple of times in their 25-year marriage, however, he did leave the family home because he was recruited to work in conflict areas and warzones, although not for extended tours.

“I think I wanted to challenge myself again,” Solnes said. 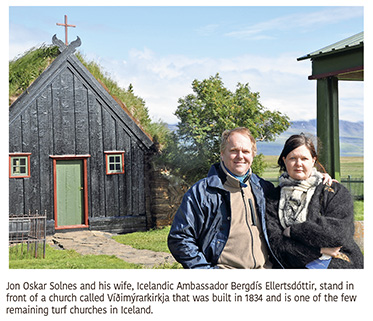 So he accepted an invitation to become communications director and chief spokesperson for the European Union’s Police Mission in Sarajevo, where he was directly in charge of 16 staffers from some of the 30 contributing countries helping to oversee the security situation in Bosnia and Herzegovina and restructure the police forces.

“The war was over, leaving scarred and burnt buildings all over the city, but Sarajevo would maybe not be called a real hardship post,” he said. “We had a small, private and wonderful Christmas there with my wife and two daughters.”

Jumping to another hotspot, in 2004 Solnes was recruited to be the public information officer and spokesperson for the Nordic- and Norwegian-led peace-monitoring mission in Sri Lanka known as SLMM, which oversaw the ceasefire between the government and Tamil Tiger rebels. He later became chief of staff and deputy chief of the mission of the mission in this war-torn but still resplendent island in the Indian Ocean that was still recovering from 25 years of civil war.

“My family knew where I was working. I was never apart from my family for an extended time,” Solnes told us. “These assignments usually lasted only six months to a year.”

He then worked with Össur, one of the world’s leading producers of prosthetics. As humanitarian aid manager and spokesperson, Solnes helped to arrange 300 prosthetics for seriously wounded soldiers and civilians in Bosnia and Herzegovina. Later, he orchestrated the fitting of hundreds of amputees, mostly landmine victims in the Kurdish region of northern Iraq.

Back in Brussels — where his wife was deputy secretary-general of the European Free Trade Association and, later, director of international trade negotiations in the Directorate for Trade and Economic Affairs — he once again became a spokesperson and also permanent delegate for the Confederation of Icelandic Employers at BUSINESSEUROPE, Europe’s main organization for business and industry.

When Ellertsdóttir became head of the Icelandic Mission to the European Union in 2014, Solnes became a senior advisor on media analysis to SHAPE (Supreme Headquarters of Allied Powers Europe) and SACEUR (NATO’S Supreme Allied Commander Europe).

From 2018 to 2019, Ellertsdóttir served as Iceland’s permanent representative to the United Nations in New York and this past September, she and the family moved to Washington, D.C., for her current posting. They now live in Iceland’s Kalorama residence, where they are almost backyard neighbors with the Obamas and within eyeshot of Ivanka Trump, her husband Jared Kushner and their young children. 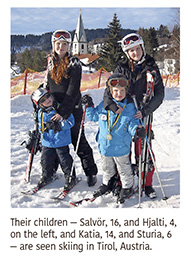 Solnes has now created his own firm as a strategic consultant in finance, media and foreign policy. He analyzes socio-economic issues, particularly in relation to EU regulations and the Icelandic economy, boiling them down to concise and understandable papers. He also helps managers write policy op-eds and connects clients to governments and other institutions.

As if that weren’t enough, he has written two books, the most recent being “A Powderkeg in Paradise: Lost Opportunity for Peace in Sri Lanka.”

His life began in Copenhagen, even though his parents were both Icelanders. At 8 years old, Solnes was chosen for the highly revered Copenhagen Boys Choir.

“They choose 50 boys from the greater Copenhagen area. It was a singing school, but you had regular classes, too. I was proud to be in the choir, but it was a burden,” he recalled. “I had to get up at 6 [a.m.], wake up alone and I left before the others woke up. I inhaled tea, toast and some cheese. Then I had to hurry to the bus, #N10 or N#16, change and get on the train for a couple of stops. I had to be there at 8 a.m.”

Despite the demanding schedule, he stayed in the choir for five years.

At 13, his parents moved back to Iceland because his father, a civil engineer, was offered a full professorship at the University of Iceland. “I was ripped away from all my friends; it was very difficult,” Solnes admits.

Ellertsdóttir and Solnes knew of each other in an Icelandic junior college but it was not until they were graduate students in West Berlin at Freie Universität that they really began to notice each other.

“It was at an Icelandic party. I looked across the room and there she was,” he said. “We were married in 1995, the longest day of the year, which is the perfect day to celebrate in Iceland.”

Looking back, Solnes said he realizes how difficult it sometimes was to move from one part of his life to another, but appreciates how each job or new career field led to another fascinating opportunity.

“In a strange and neither planned nor anticipated way, the major steps in my professional life have been taken in a sequence [that was] often surprising, but also with regard to my family: First, TV sports as a young man thriving in that entertainment sector. Later, foreign news in TV followed by news reporting from the Middle East and former Yugoslavia. Banking when everybody thought nothing could go wrong. Later, representing the European Union in Bosnia and the Nordics in Sri Lanka. Back to good old Bosnia on a huge prosthetics project followed by yet another tour in Sri Lanka, now as chief of staff. Who would have connected these points in advance? Not me surely,” he said.

“You have to differentiate between the two worlds: a warzone and being safe at home with your family. It’s complicated,” he added. “You have to be patient, get used to it. It’s a shock to the system to come from a dangerous yet exciting environment where you hope you’re making a difference in comparison to being Mr. Mom, where you’re hoping to make an even bigger difference.”