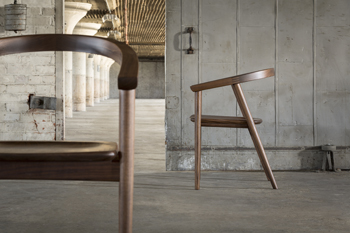 Furniture maker Tom Moser prides himself on creating unornamented pieces derivative of 19th-century American primitive forms using hardy American wood, mainly cherry and walnut. But in talking with the 80-year-old designer — who recently reopened Thos. Moser Handmade American Furniture in Georgetown — a foreign influence becomes apparent. We sat down with him while he was in town for the reopening of his 5,500-square-foot showroom off M Street to find out where he finds inspiration after 43 years in the business, including about 35 years with a store in Washington.

Handmade American wood is the backbone of Thos. Moser furniture, as seen in its Cumberland chair.

Twenty-five years ago, Washington was emulating Williamsburg, [Va.]. Williamsburg, of course, was reliving the 18th century, and so you had all this mahogany furniture — period [pieces], such as Chippendale — that was very common in everybody’s living room. Typically you had Oriental rugs, mahogany furniture, and it was almost all made in North Carolina, which was the capital of the furniture world. That has migrated to China — probably 85 percent of the furniture sold in Washington, D.C., for a residential use is made in Asia — so that’s been a big change, and the styles have been a big change, away from what I would call formal furniture to more crafted and uniquely American forms.

Have you updated or changed any of your furnishings to reflect these new tastes?

No, not really. I always say the new tastes are more reflective of our old tastes.

Do you have an international following?

Some years ago we had a relationship with a group in Kyoto, [Japan], and that was very successful until their recession hit in the mid-’90s and that slowed things down. In the meantime, every month there’s another piece going to Europe, principally to Americans who are living there. One time I got a call from a person with a Middle Eastern accent who wanted to buy $100,000 worth of furniture, which for us would be a huge order. He said, “Give me your checking account number and I’ll transfer the money.” That sounded like that might be a scam, so he said, “Go down to the Moroccan Embassy and they will vouch for me.” It turned out to be the king.

You spent a year teaching English in Saudi Arabia. How did that experience affect you?

I had a wonderful, wonderful time. We set up language labs for the teaching of English [at what’s now the King Fahd University of Petroleum and Minerals]. That was in 1965. There were about 60 students when I got there. I was one of about six Ph.D.s in the kingdom. I got to travel. I went to pretty much every Middle Eastern country — Iraq, Iran, Kuwait.

Do you still travel? 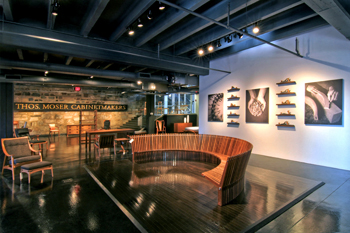 A circular bench display at the furniture maker’s showroom in Georgetown.

During your travels, do you pick up any ideas for furniture?

Oh, sure. I’m awful that way. I turn over chairs. I’m forever exploring and investigating. Last summer, I took a ferryboat from Portland, Maine, to Nova Scotia, and on that boat were some small stackable chairs. I think they were made in Italy. They were aluminum with an artificial leather seat and back — just a very simple stacking chair, but the architecture of the back was fascinating because it was like a potato chip curled in both directions. It was concave and convex at the same time. That inspired me and just two weeks ago I finished a prototype using that architecture.

What furniture do you admire elsewhere?

I like Scandinavian design because it shares many of the values I have about functionalism, an honesty in materials, understanding the materials, particularly wood, and they don’t do too much with ornamentation. I did show our work at the Scandinavian Furniture Show in Copenhagen some years ago, and it had very much a Shaker feeling, and I was amazed at how much the Danes — in fact, the Scandinavians generally — admire American Shaker forms. That is somewhat at the route of what you would call Danish or Scandinavian modern back in the ’50s and ’60s.

Of course, I love much of the contemporary Italian design. They are probably the leading proponents of contemporary design in the world today.

What is your favorite piece of furniture to use?

The chair that I sit on at my desk at home — I spend quite a bit of time in it — is a low-back Windsor, which we call the Newport Chair. It’s a beautiful design. It’s very fluid. It’s based on a captain’s chair formula, which has been around for several hundred years. Incidentally, I also like our Continuous Arm Chair, which is our standard piece that most people identify with us.

If you could put one of your pieces in the White House, what would it be?

We did that. It happened to be the Harpswell Chair. When Pope Benedict came here several years ago to visit George W. Bush, Laura Bush asked if we would make several chairs for the reviewing stand. She used a custom fabric, and I signed one of them with a W. That’s the one George sat in, and I signed the other with a B. That’s where the pope sat. That design is more European than American. I would have preferred that they sat in Windsor chairs, and even those aren’t really American. They started in Windsor, England. They were perfected here in this country.