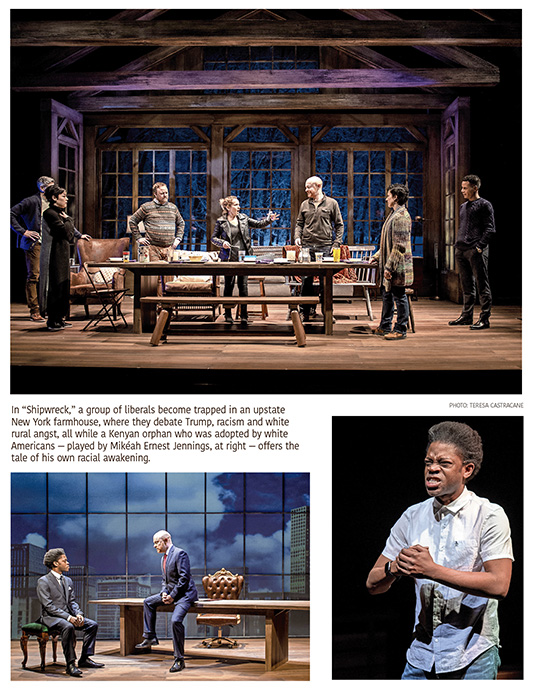 It’s hard to say anything new or interesting about the 2016 election or President Donald Trump, but playwright Anne Washburn manages to do it in “Shipwreck,” which made its U.S. premiere at Wooly Mammoth Theatre last month. But the subject matter makes the three-hour play feel a bit like homework and taste a little like medicine.

Washburn wrestles consciously with the problem.

Subtitled “A History Play About 2017,” the script explicitly questions whether theater has any power to effect change and whether anything we are saying about the present moment will seem relevant in 20 years — or perhaps in four years. Even when all the citizens of Athens were required to attend his plays, the Greek tragedian Euripides failed to raise opposition to the Peloponnesian War, a disastrous conflict between democratic Athens and oligarchic Sparta, one character explains. Washburn also winks at the relatively plot-less structure with a setup identical to “The Mousetrap,” the immortal, or at least undead, Agatha Christie country house mystery that’s the epitome of plot-driven theater.

Act I opens in the living room of an upstate New York farmhouse recently acquired by a liberal couple from the city as their Manhattan friends arrive for a weekend party. The husband returns without the groceries. A snowstorm rolls in, isolating them in the house. But there is no murder, however much the audience may wish for one, only a postmortem of the Trump victory and the president’s recent, unbelievable defanging of FBI chief James Comey.

It’s a bitter brew, written for a silo audience of liberals. But there are occasional spoonfuls of sugar to help the medicine go down. Washburn is both witty and wise. She lampoons the all-too recognizable liberal cant: One character demands to know where a point another is making “comes from,” for example, revealing that all their (and all our) discussions on this topic are essentially parroted from the op-ed pages of The New York Times and Washington Post. And Washburn also adds some genuine fresh perspective, citing Jim Jones — an American civil rights preacher who was lionized by a who’s who of Democratic leaders in California before he served up the Kool-Aid and became a cult leader who directed the mass-suicide of his followers — as the forgotten liberal analogue to Trump’s conservative brand of Kool-Aid.

There is something perversely satisfying in this epiphany, a kind of self-flagellation. But it’s not the only payoff the play offers. Interspersed with the sometimes trite, sometimes insightful deconstruction of Trump’s inexplicable appeal are monologues from a young, raw and genuine character, Mark, whose connection to the partygoers does not become clear until the climax. While all the members of the ensemble cast are engaging and convincing, it’s the emotionally honest and charismatic Mikéah Ernest Jennings, who portrays Mark, who gives the play its soul.

Addressing the audience directly in a series of monologues, he movingly elucidates the messy, immediate, contradictory life that underpins all our intellectual discussions of racism, white rural angst, Trump’s Mussolini-like appeal and so on. As a Kenyan orphan who was adopted by white Americans and raised on a farm, he offers an implicit parallel to the president who Trump succeeded, of course. But his funny and sad and hopeful and disillusioned tale of his upbringing and racial awakening — which in a way provides a stealth plot — also punctures and illuminates the myths evoked by the supposedly post-racial, painfully “woke” party guests.

The play’s other great charm is its depiction of Trump. Following the party guests’ deconstruction of the Comey affair, the president’s claims that he worked valiantly to keep America from invading Iraq in 2002, and the way he led Republicans to a high place and promised them all the kingdoms of the world, Trump himself appears in a series of fantasy sequences that dramatize these moments. Director Saheem Ali wisely eschews direct impersonation — instinctively realizing that all the laughs in Trump’s gravelly voice, effete gestures and hyperbolic diction have been played out by Alec Baldwin and late night talk show hosts. And Washburn recognizes that the president’s every utterance is absurd enough to defy parody.

Instead, a series of vignettes give us Trump as he might imagine himself, the would-be Trump who’d exist if everything he claimed about himself were actually true. The conceit allows the play to wring a new kind of joke out of the heavily mined material, but it does more than that. More than any attempt to one-up the absurdity of Trump’s statements, it drives home exactly how ridiculous and, well, laughable they are.

Shipwreck: A History Play About 2017

Jason Overdorf is a contributing writer for The Washington Diplomat.