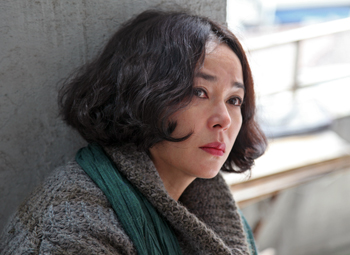 ‘Fill the Void’ and ‘Before Midnight’ and Repertory Notes

“Pieta,” the latest from prolific South Korean filmmaker Kim Ki-duk (“3-Iron,” “Samaritan Girl”), portrays subject matter that is rather aggressive and disturbing, in line with the rest of his body of work. “Pieta” may be one of Kim’s most accessible films on some levels, but it is still not for all audiences, by any means.

Nevertheless, it deftly navigates a delicate and curious blend of graphic ultra-violence and fascinating psychological character studies. “Pieta” packs quite a wallop for a small movie with a relatively simple story depending largely on its two main subjects, well played by the two lead actors Lee Jung-jin and Cho Min-soo. After 18 films, Kim knows how to make a lot out of a little, and “Pieta” makes a fine addition to the popular and often critically acclaimed revenge genre of South Korean and Asian films.

Lee Kang-do (Lee Jung-jin) serves as the muscle for a loan shark. Roaming the streets of a working-class, industrial neighborhood of Seoul, he collects loans from poor borrowers whose only collateral is signing over insurance policies to the money lender. Since their clients typically are unable to pay the money owed, Kang-do serves as a ruthless enforcer who cripples the delinquent debtors so his boss can submit claims on their insurance policies. Kang-do has no qualms about efficiently executing the demands of his job, ignoring his victims’ cries pleading for mercy. He leads an emotionless, lonely existence that is primal even at home, where he brings living animals to kill for his meals.

One day, a woman called Mi-sun (Cho Min-soo) appears at his door and confesses to being his mother who gave him up at birth. She begs forgiveness, but he keeps her at bay, forcing her to endure a cruel series of hurdles to prove herself. Eventually, he warms up to her and begins to assume the role of child to her parent, feeling both dependent on and protective of her. Kang-do seeks to go straight and yearns for redemption, but his very dark past may not be so easy to escape.

Hasidic Society in ‘Fill the Void’ 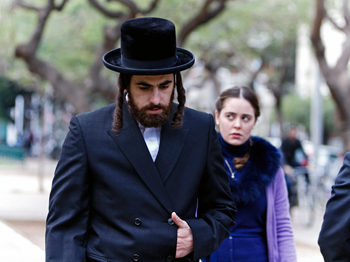 Yiftach Klein, left, and Hadas Yaron play members of Israel’s ultra-Orthodox Hasidic community who are thrown together after the death of Yaron’s older sister in “Fill the Void.”

Ultra-Orthodox Israeli writer-director Rama Burshtein, formerly of New York City, makes an impressive feature film debut with the compelling drama “Fill the Void,” which had a well-received East Coast premiere at the New York Film Festival. Her film proves to be a revealing, yet respectful, portrayal of the closed ultra-Orthodox Hasidic community in Israel.

There, at the age of 18, Shira (Hadas Yaron), the youngest daughter of a deeply religious upper-class family in Tel Aviv led by Rabbi Aharon (Chaim Sharir), looks forward to her impending arranged marriage to a young man of similar age and station with a bright future. She and her matchmaker tail the viable candidate in the grocery store, followed by protracted negotiations between their families.

But when Shira’s 28-year-old sister, Esther (Renana Raz), dies during childbirth, Shira’s wedding preparations are postponed while the family grieves. Still in mourning, Esther’s widower, Yochay (Yiftach Klein), opposes an offer to marry a widow in Belgium, but he knows his baby will need a mother sooner or later. Rather than risk him leaving Israel with her sole grandchild, Shira’s mother (Irit Sheleg) proposes that Shira marry Yochay. Both parties initially resist, but continued arguments over the passing of time start to sway both Yochay and Shira.

Burshtein’s well-crafted screenplay benefits from its incubation at the Sundance Institute. Her clear direction in tight quarters depicts the constraints of the culture — enhanced by director of photography Asaf Sudri’s soft, hazy cinematography — while fully developing the story and characters. The roles are elegantly acted by a talented ensemble cast led by young Israeli actress Yaron in a startling performance heralding the birth of a star.

Israel’s official submission to the Academy Awards for Best Foreign Language Film, “Fill the Void” was nominated for 13 Israel Film Academy Awards, winning, among other categories, for Best Film, Best Director and Best Actress for Yaron, who also nabbed the prestigious Volpi Cup for Best Actress at the Venice Film Festival.

Satisfying End in ‘Before Midnight’ 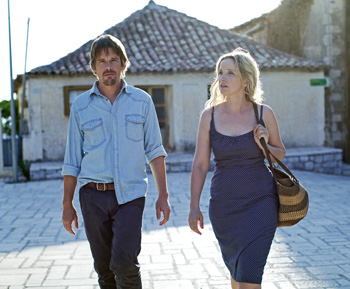 “Before Midnight” held its East Coast premiere at the Tribeca Film Festival, where it was an audience and critical favorite, presented in person by American writer-director Richard Linklater, French writer-actress Julie Delpy, and American writer-actor Ethan Hawke. Their latest collaboration marks a fitting end to one of the best trilogies and deepest romances in cinematic history, which started with “Before Sunrise” (1995) and continued with “Before Sunset” (2004).

In “Before Sunrise,” Jesse (Hawke) and Celine (Delpy) were in their 20s when they met on a train to Vienna, spending a night together talking and dreaming of possibilities. In “Before Sunset,” they reunited in Paris in their 30s, wistfully contemplating what might have been. “Before Midnight” reveals that Jesse did indeed miss his flight at the end of “Before Sunset,” as hinted at but never confirmed by the film, leaving his troubled marriage to finally join Celine.

Now in their 40s, they cohabit in Paris with twin daughters Ella and Nina (Jennifer and Charlotte Prior). Nearing the end of a family vacation in Greece, Jesse clumsily drops off his estranged 14-year-old son Hank (Seamus Davey-Fitzpatrick) at the airport for a flight home to his mother in Chicago. Supporting and raising a family is tough business, as shown by the squabbling nature of Jesse and Celine’s banal conversation on their way to their vacation house in the southern Peloponnese Peninsula, where they’ve stayed for the past six weeks at a writer’s retreat.

Their expatriate host Patrick (Walter Lassally), an elder writer colleague of Jesse’s, throws them a goodbye dinner where they talk about books, life, love and more with guests including married couple Ariadni (Athina Rachel Tsangari) and Stefanos (Panos Koronis) and unmarried young lovers Anna (Ariane Labed) and Achilleas (Yannis Papadopoulos). As a farewell gift, their Greek friends offer to take care of the twins and rent Celine and Jesse a hotel room so they can spend their final night on vacation alone. Now we’re back to the one-on-one freeform, meandering dialogue between Celine and Jesse that we loved in the earlier movies.

Linklater shares writing credits with his lead actors Delpy and Hawke, as he did in the Oscar-nominated adapted screenplay for “Before Sunset,” resulting in naturalistic, truly believable dialogue indicative of the improvisational sessions that created their lines. Delpy and Hawke turn in heartfelt performances portraying the realities of their characters in middle age. Linklater’s restrained direction allows their conversations to develop in smooth, long takes. And director of photography Christos Voudouris’s luminous cinematography lovingly displays the vivid actors and the beautiful background — complemented by Graham Reynolds’s mellifluous score and editor Sandra Adair’s adroit cutting.

Now in its 13th year, the 2013 DC Caribbean Filmfest (May 31-June 2) — copresented by the Caribbean Association of World Bank and IMF Staff (CAWI), the Caribbean Professional Network (CPN), Institute of Caribbean Studies (ICS) and TransAfrica — presents films from the region in honor of Caribbean Heritage Month in June.


The retrospective “Jean Rouch in Africa” (May 26-June 15) offers key selections from the work of the noted French ethnographer, concluding on June 15 with screenings of “Les Maîtres fous” followed by “Jaguar” (2 p.m.) and “Petit à petit (Little by Little)” (4:30 p.m.).