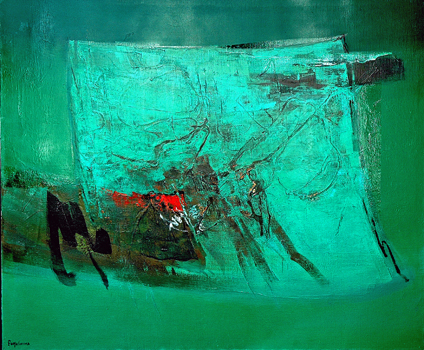 Tikashi Fukushima’s “Verde” is highlighted in “Fusion: Tracing Asian Migration to the Americas through AMA’s Collection” at the Art Museum of the Americas.

Also see: “The Burning of Visibility: From Reality to Dream“

The Art Museum of the Americas leads to the grand courtyard of the headquarters of the Organization of American States, replete with fountain, pebble walkways, greenery, a few sculptures and a sense that you are deep in Latin America rather than a stone’s throw from the White House.

Inside the museum’s galleries, however, is a very different cross-cultural immersion.

This haven of contemporary Latin American and Caribbean art — whose stunning entrance is punctuated by decorative bas-relief tiles with sculpted Mesoamerican-looking faces — is showing an even more far-reaching face of its culture: Latin artists with Asian roots.

After the 1834 abolition of slavery in the British Empire, Asian migration to the Caribbean, Central and South America took shape in boatloads of indentured servants brought over to work on plantations. Labor shortages up until the 1930s continued to bring in waves of Asian workers, including Japanese, Chinese, Indian and Indonesian immigrants.

The workers usually stayed on and their descendants absorbed the customs of their distant homelands in the East and the Latin way of life into which they were born. Artists who emerged thus imbued two cultures in their creative process, resulting in a rich tapestry of visual arts seen in countries such as Brazil, Peru, Cuba, Suriname, Argentina, and Trinidad and Tobago.

Their work in the early-to-mid 20th century is representative of art trends at the time — abstract expressionism and surrealism — and some pieces bear obvious resemblances to specific artists such as Paul Klee, Joan Miró and Piet Mondrian.

For example, Manabu Mabe’s “Solemn Pact” is strikingly surreal. A taut white string drops from a white bone-like wing that juts across the brilliant blue canvas and ends in a blood-red object that seeps outside the canvas. A black ship-like mass embellished with soft brushstrokes emerges from the left to somehow balance the white bone.

The Japanese-born Mabe (1924-97) came to Brazil as a child, worked in a coffee plantation, made a living as a young adult peddling his own hand-painted ties for 85 cents to $1.15, and painted at night. When finally recognized as an artist he was catapulted to fame. Time magazine declared 1959 “The Year of Manabu Mabe.” 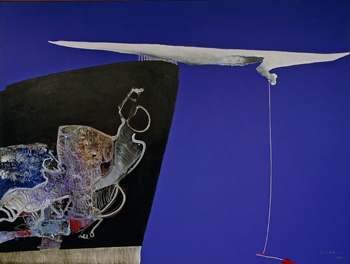 Tikashi Fukushima (1920-2001), also a Brazil immigrant born in Japan, is represented here with “Verde,” a large abstract oil done primarily in two shades of iridescent green. The sea of green is interrupted by a turmoil of black, brown and a splash of red that speaks to Fukushima’s deftness in creating sweeping brushstrokes of luminous color.

Born to a Japanese immigrant father and Peruvian mother in 1932, Venancio Shinki painted “Tierras Bien” in a style that echoes Paul Klee. Specks of ivory, brown and yellow float against a tawny gold backdrop in airy, semi-transparent suspension.

Meanwhile, Eduardo Tokeshi’s oversize white-on-white collages “Pajaro” and “Ventana de Luz” resemble fabric stretched and tied over curved rods that could be hangars. The Peruvian artist with Japanese parents epitomizes the soul of an immigrant’s child: “I always say that I was educated on the island of Okinawa, in the center of Lima.”

Likewise, M.P. Alladin (1919-80) embodies the cultural transplant. Born in Trinidad and Tobago to Indian parents, he was an art teacher who promoted the mixing of island styles in his students’ work, contrary to prevailing mores that encouraged Western or European traditions.

Indeed, “Las Palmas” has a strong Latin character, featuring black intermingling palm fronds on a deep blue background punctuated with violet-red splotches. The abstract piece conveys the lightness of Caribbean air as the palms seem to sway and wave.

Mexican artist Gunther Gerzso’s “La Casa de Tataniuh” appears to mimic Piet Mondrian with its geometric lines and palette of red, white and golden brown but is wholly original. This colorful silkscreen is an abstract portrayal of a cityscape — with a tilt of the eye you can envision the buildings. The artist’s “layered inter-locking geometries suggest a metaphorical excavation of Mexico’s indigenous legacy,” reads the wall text beside the print.

Gerzso is not of Asian heritage and this print isn’t part of the exhibit. But it’s interesting to look at his work alongside his Latin-Asian contemporaries in the other room. The paintings echo each other in certain elements and styles yet each have their own distinct personality — much like the larger melting pot of Latin cultures that have influenced each other while retaining their individual flavor.

Venancio Shinki could’ve been speaking for all Asian-descended artists when he said: “Although Japan is indeed part of my heart and veins, I am profoundly Peruvian and Latin American.”

Fusion: Tracing Asian Migration to the Americas through AMA’s Collection