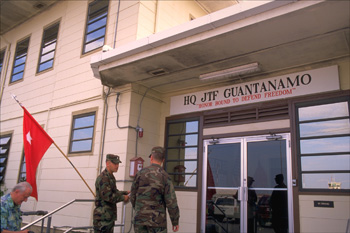 The media and political junkies had a field day last month after Vice President Joe Biden and his predecessor Dick Cheney traded barbs over the Justice Department’s handling of alleged Christmas Day airline bomber Umar Farouk Abdulmutallab as a civilian and not an enemy combatant.

A headline in the New York Post read, “Biden and Cheney go toe-to-toe on terrorism, as battle of the veeps heats up.” Fox News equated it to a boxing match, “Biden vs. Cheney: Battle of the Vice Presidents.” And late night’s David Letterman joked that Cheney was upset with Biden because “when he moved in after they were elected, he closed down Cheney’s dungeon in the White House,” alluding to Cheney’s belief that waterboarding is a valuable interrogation technique.

Soldiers enter the headquarters of Joint Task Force, U.S. Naval Base at Guantanamo Bay, where the closing of America’s detention camp for suspected terrorists has been delayed by concerns over where to transfer the detainees — and where to try them, as experts continue to debate the merits of civilian court versus military tribunals.

Jokes aside, the disagreement between Biden and Cheney is part of a long-running political dispute over the best way to deal with “terrorist” suspects — a fight that most recently has complicated plans to close Guantanamo Bay prison, to handle Abdulmutallab, and to try alleged 9/11 mastermind Khalid Sheikh Mohammed in New York federal court.

The battle dates back to shortly after the Sept. 11, 2001, attacks when President Bush signed an executive order that called for suspected terrorists or people associated with terrorists to be tried in U.S. military tribunals instead of the civilian court system.

Supporters said tribunals provided the United States with more leeway than civilian courts because of less stringent rules regarding evidence and because a conviction requires a two-thirds vote by a majority of the members present at the time of the vote, as opposed to a unanimous verdict by a 12-member jury.

Supporters also argue that tribunals remain the most realistic way to preserve national security, to achieve justice under the complexities of today’s war on terrorism, ease security concerns and save money. Following a few minor tweaks, they say the commissions are now fully prepared to deal with terrorist suspects.

But over the years, critics have said the military tribunals system has proven to be unreliable, legally questionable and ignorant of the laws of war and the Geneva Conventions. They argue that trying suspects in U.S. federal criminal court would send a powerful message to pockets of the world, where people have been shocked by the way the United States has treated terrorist suspects. They also point out that suspects were successfully tried in federal courts dozens of times during the Bush administration.

So, the back and forth between Biden and Cheney is just another chapter in an ongoing feud over whether military tribunals or the federal court system is the best legal arena to prosecute suspected terrorists, and the laundry list of thorny legal issues that comes with that question.

And politically speaking, it’s another fight where Republicans are falling back on the time-tested rhetoric of the Bush-Cheney years, casting their Democratic counterparts as “soft on terrorism” and using it as another opportunity to jockey for position before the crucial midterm elections this fall.

This dispute regained footing hours after President Obama took office and suspended the controversial Guantanamo Bay military tribunals. At the time, many civil rights groups hoped it represented the first step in fulfilling his campaign promise to close down the detention camp in Cuba and phase out the reliance on military tribunals. 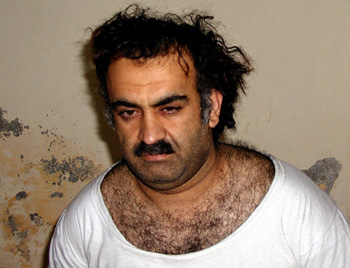 The Obama administration’s initial decision to try alleged 9/11 mastermind Khalid Sheikh Mohammed — seen here during his capture — in federal court in New York City met with fierce resistance from critics who argue that a military tribunal would be far less costly and better able to protect national security.

But months later, Obama changed course after he made it clear that the military commissions could be refashioned into an effective forum for trying certain alleged terrorists. Soon after, Congress approved some proposed changes and in October, Obama signed the reforms into law, basically expanding due process rights for detainees.

Among the fixes: precluding the use of coerced testimony; limiting the use of hearsay testimony; establishing new procedures for handling classified information, similar to procedures applicable in the civilian courts; providing defendants with fairer access to witnesses and documentary evidence; and requiring that defendants be provided with appropriate representation and adequate resources.

The following month, U.S. Attorney General Eric Holder announced that alleged 9/11 mastermind Khalid Sheikh Mohammed, better known as KSM, and four other suspected terrorists would be tried in a New York City federal court, while five other detainees at the Guantanamo Bay prison, including Abd al-Rahim al-Nashiri, alleged to have planned the 2000 bombing of the USS Cole, would face military tribunals.

While some said the approach sent mixed messages, others agreed that the two-tiered system of justice was a smart way to move forward.

“We might call them the ‘high-quality’ [civilian] tier and ‘low-quality’ [military] tier. The high-quality approach offers greater accuracy; the low-quality approach offers less accuracy,” Eric Posner, law professor at the University of Chicago, posted on the Volokh Conspiracy legal web blog. “The Obama administration will use the high-quality system against people when it has a strong case, and the low-quality system against people when it has a weak case.”

Posner argued that the approach made sense because “endless detention without trial is no longer a politically viable option.”

But since then, aided by the controversy over the administration’s handling of the failed Christmas Day plot, Senate Minority Leader Mitch McConnell (R-Ky.) and his Republican colleagues have taken aim at Obama’s stance. McConnell has vowed that Congress would reject any funding requests for a trial of KSM in a federal courthouse, citing security concerns and a 0 million price tag per year estimated by New York City government officials, including Mayor Michael Bloomberg.

In a Feb. 3 speech before the Heritage Foundation, a Washington-based conservative think tank, McConnell said the Bush administration was wrong to try some “enemy combatants” in civilian courts and that KSM should be tried before a military tribunal, not in “the same courtroom as a common criminal, just a few blocks from where the World Trade Center once stood.”

“As recently as last year, Congress updated the Military Commissions Act with input from the White House,” he said. “We realized civilian courts weren’t the right setting, and we did something about it. We were flexible. The Obama administration, on the other hand, is not. My question is this: Why would the administration help rewrite the military commissions law if they didn’t intend to use it for the very people, like the Christmas Day bomber, for whom it was written?”

McConnell added that the administration potentially lost valuable intelligence when FBI officials decided, without consulting top U.S. intelligence officials, to treat Abdulmutallab as a domestic criminal and read him his Miranda rights after 50 minutes of interrogation.

But FBI Director Robert Mueller countered in congressional testimony that Abdulmutallab had yielded valuable information during his interrogation, including a detailed account of his time in Yemen. Holder also came to the FBI’s defense, listing numerous terror suspects who were convicted or provided key intelligence to federal authorities after being granted Miranda rights. Holder also wrote to McConnell saying that the decision to charge Abdulmutallab in federal court is “fully consistent with the long-established and publicly known policies and practices of the Department of Justice, the FBI, and the United States government as a whole, as implemented for many years by administrations of both parties.”

To that end, Ken Gude, associate director of the International Rights and Responsibility Program at the liberal Center for American Progress, says it is remarkable that conservatives trumpet military commissions “as if their performance was beyond reproach,” and seem to ignore that they still stand on shaky legal ground.

Lt. Col. David Frakt, a law professor at Western State University who has represented defendants before military commissions at Guantanamo, agreed that serious questions over the commissions’ legality and definition of what constitutes war crimes are impeding successful convictions.

“Two of three military convictions are on appeal,” Frakt said. “One of the issues they are arguing is whether the effort to make terrorism crimes into war crimes is legitimate. They were convicted of material support of terrorism, which has never been considered a war crime.”

In contrast to military commissions, “there is no question about the legitimacy of U.S. federal courts to incapacitate terrorists,” they wrote in a Washington Post op-ed. “Many of Holder’s critics appear to have forgotten that the Bush administration used civilian courts to put away dozens of terrorists, including ‘shoe bomber’ Richard Reid; al-Qaeda agent Jose Padilla; ‘American Taliban’ John Walker Lindh; the Lackawanna Six; and Zacarias Moussaoui, who was prosecuted for the same conspiracy for which Mohammed is likely to be charged. Many of these terrorists are locked in a supermax prison in Colorado, never to be seen again.”

Comey and Goldsmith said the “wisdom of that difficult judgment” to try KSM in federal court will be determined by future events. “But Holder’s critics do not help their case by understating the criminal justice system’s capacities, overstating the military system’s virtues and bumper-stickering a reasonable decision.”

Seth McLaughlin is a contributing writer for The Washington Diplomat.