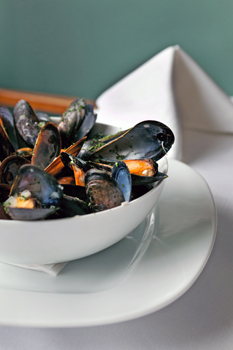 La Côte D’Or is the brainchild of Raymond and Lynne Campet, who sold their enormously popular French restaurant on Capitol Hill, La Brasserie, in 1992 to open a new restaurant in Northern Virginia.

Just off Route 66 in a rapidly transitioning area on the Falls Church-Arlington border sits a squat little building that looks a bit out of place amid the recent development. The building is the home of La Côte D’Or Café, a cozy, romantic spot for a special occasion or just an excellent meal. Though it’s been a long-time favorite of many loyal patrons, the French eatery remains relatively unknown to those outside of Northern Virginia.

La Côte D’Or is the inspiration of Raymond and Lynne Campet. Veterans of the D.C. restaurant world, the Campets sold their enormously popular French restaurant on Capitol Hill, La Brasserie, in 1992 to open a new restaurant closer to home.

Since its opening 20 years ago, La Côte D’Or has seen many changes. To give diners a choice of formal or casual dining, the Campets moved the fine dining portion into the previously used private room with some upgrades to the décor. The original building then became the Bistro Des Celestins, specializing in casual, less-expensive fare. Recently, however, they moved La Côte D’Or back into the main body of the restaurant and have opened Le Marché in the back for quick and casual breakfasts and lunches.

The current menu at La Côte D’Or offers both classic bistro fare as well more complex dishes. On recent visits, the best choices tended toward the bistro side of the menu. The paper-thin crêpes, either wild mushroom or seafood, are delicate but rich in a silky cream sauce. (Sugar and chocolate dessert crêpes are also very nice.)

Two types of sausages — spicy lamb Merguez with frites and the milder pork Toulouse with lentils — are good, hearty choices. Spicy garlicky mustard is served as a dipping sauce for both the sausages and fries, a nice touch that enhances the dish. The fries, which also accompany the mussels and Parisian minute steak, are the thin, long and nicely crispy on the outside yet soft inside.

Another area of the menu that’s handled expertly is the soup. The poisson rendition is aromatic with clear broth, herbs and chunks of various seafood, all accented with bread and an intensely garlicky tomato spread. The French onion is a well-executed cheesy classic, as is the gazpacho Andalouse, though the latter is somewhat milder than might be expected. Salads offer a nice alternative to soup, and here the classic Niçoise and Lyonnais are both solid choices.

La Côte D’Or also offers a number of fish and seafood choices — mussels, herbed salmon, swordfish au poivre, tilapia, clams, Dover sole meunière — all of which are extremely fresh and well prepared but vary in their appeal. The salmon, for example, is respectable but rather mundane. Likewise, the meat dishes have been somewhat inconsistent. On a recent visit, the veal picatta was bland and almost dried out while the lamb steak was near perfect. 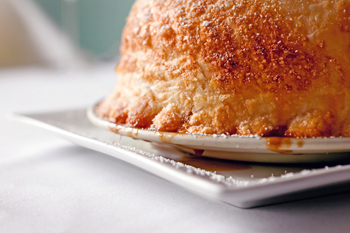 La Côte D’Or specializes in classic bistro fare in a cozy setting that adheres to the French cooking philosophy of simple, well-prepared ingredients.

La Côte D’Or rounds off the meal in successful fashion with a selection of classic desserts, including crème caramel, crème brulée and chocolate mousse. Tarts (strawberry and raspberry) are simpler, with puff pastry layered with fruit and just the tiniest amount of filling. House-made sorbets are refreshingly light and not too sweet, especially the pineapple version when it is available. The made-to-order house special dessert is a delicious apple tarte tatin that requires an extra 10 minutes but is well worth the wait.

The beauty of the food at La Côte D’Or is its simplicity. Well-prepared ingredients are a hallmark of French cooking and in honing to this principle, the Campets produce consistently good results. Their primary concern is the food itself rather than cuisine as a form of self expression or high art. While the presentation of each dish is considered (they are all appetizingly laid out), this is food that is clearly made to be eaten, not admired or pondered.

Service is uniformly excellent. Owner Raymond Campet — who early in his career became the maitre d’ to French Ambassador Charles Lucet — is just as attentive to his guests as he always has been, visiting each table to make sure that everything is to his guests’ liking. His wait staff is well prepared to provide the same level of service, with excellent knowledge of the menu and quick, unobtrusive attendance to water glasses and bread baskets (perfectly crusty baguette slices and sweet cream butter are an early temptation in the meal). The conviviality of the staff helps to create a friendly and soothing atmosphere that pervades the restaurant. 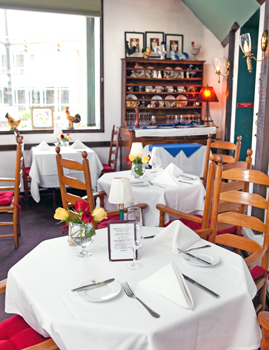 Like all things, prices at La Côte D’Or have crept up over time. With the closing of the bistro and consolidation of the two menus, prices are higher than one might expect for this type of restaurant, especially for the daily specials, which seem surprisingly high. There are, however, several ways to enjoy the restaurant on a budget. An early evening prefix menu of three courses (Tuesday through Friday) is moderately priced, as is the Wednesday evening special (order one entrée and receive a second for free when ordering two courses and 50 percent off bottles of wine less than $50).

La Côte D’Or is named after one of the 83 French departments created during the French Revolution. Located in the Bourgogne (Burgundy) region, the department takes its name from an escarpment that cuts through the area. On one side, the hill looks out over thick forests while the other side overlooks the lush vineyards that produce the wines for which the region is famous. Sitting in this quaint restaurant decorated in a French provincial style and redolent with the smell of sautéing garlic, one can almost forget that the view outside the window is of Lee Highway and not the beautiful golden hills of France.

As summer winds down and thoughts turn to rainy autumn days, cozy and bright little places like La Côte D’Or become even more appealing — just one of the many reasons why the restaurant belongs on anybody’s list of local hideaways.