Beauty is like a fingerprint. Each person’s is unique. So too is the way people see and practice it, providing plenty of clients for a multibillion-dollar industry here in the United States. But beauty isn’t just an American obsession. To get a sense of how it is viewed and applied in other parts of the world, we spoke to five Washington professionals who received their training abroad.

A native of Syria, Dr. Ayman Hakki, above and far left, is the founder of Luxxery, his state-certified surgery suite and après-surgery pampering center in Waldorf, Md., as well as Luxxery Express in D.C., the first Washington-area Botox Cosmetic Boutique.

In Dr. Ayman Hakki’s native Syria, there is less need for procedures such as buttock and breast augmentation, he said. The most-requested cosmetic surgeries are nose jobs and liposuction to remove fat. Washingtonians, on the other hand, are more interested in those procedures and quick fixes.

“Washingtonians don’t have time to take off to recover from big-ticket items,” said Hakki, who sees about 50 clients and performs about 20 procedures per week. “Washingtonians do a lot of non-invasive procedures such as fat transfer, fillers and Botox.”

That contributes to the success of Luxxery, his state-certified surgery suite and après-surgery pampering center in Waldorf, Md., and Luxxery Express in Washington, the first D.C.-area Botox Cosmetic Boutique, where Hakki performs injections and minimally invasive procedures. Because of doctor-patient confidentiality, he can’t name his famous patients except to say they include politicos, former Miss Americas, news anchors and hall-of-fame football players.

Hakki — whose father was Rajai Wahid Hakki, a cultural attaché in the United States for the Syrian Foreign Service from 1962 to 1964 — knew he wanted to become a plastic surgeon when he was 16 and read about a Brazilian surgeon who had worked on Sophia Loren.

“I wanted to do just that,” he said, “make women beautiful.”

He recognized instantly that he could merge his inner artist with his inner scientist. Hakki attended the Damascus University School of Medicine in his native city while painting on the side to earn extra money.

“The Syrian system of medicine was very theoretical and dependent on rote memory,” he said. “It was actually a very uninspiring six years. The only saving grace during those years was that I made pocket money by doing watercolor portraits of famous people in Damascus. One of them was Princess Mona, the mother of my third cousin, [and] Alwaleed Bin Talal, the Arab world’s Warren Buffett.”

Hakki did his residency work at Georgetown University Medical Center here. As a child, he’d attended Murch Elementary School in Northwest and vowed to return to Washington.

“It took 20 years to become a board-certified assistant clinical professor of plastic surgery at Georgetown,” he said. “To the best of my knowledge, it was the only residency program in America that required an art class every Monday for two years in a row. There I was, on a journey from [age 16, taking a weekly art class in Damascus] to 36, attending a weekly art class in our nation’s capital. This combination of art and science is exactly what inspired me as a young kid, and still does to this day.” 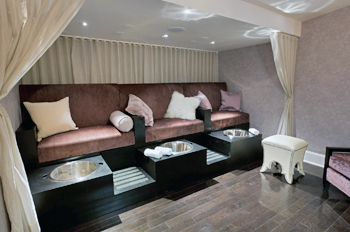 Although she misses tending to the skin care needs of the Danish royal family and heading a self-built beauty empire that included several spas and a national magazine, Hanne Powers has adjusted quickly to life in Washington. She moved here in August 2011 to be with her American husband.

“I love D.C. The hardest thing, though, is not having the same identity as I did,” said Powers, 35, a Copenhagen native who graduated from the Cidesco Beauty Centre at age 21. “When you built something for that many years, it’s hard. But I also must admit that it’s so nice not to have your own spa. When I come in, all I have to think about is doing my treatments and being with my clients.”

“I feel like the European or the Danish beauty industry is a bit further. An example would be the oxygen treatment,” said Powers, referring to the application of moisturizers using pressurized oxygen. “Here it’s very big, everybody’s talking about it. It’s kind of yesterday, it’s kind of old news in Denmark. It was huge seven, eight years ago.”

Another difference is the hair-removal process of waxing. In Denmark, people either have everything waxed or do nothing. “It’s not a sure thing that everybody has shaved legs,” she said, whereas American women won’t even go two days without shaving.

Americans’ hesitance with permanent makeup also baffles Powers. “In Denmark, we have so many blonde people, I could have a full day of tinting eyelashes and eyebrows,” she said. “I think I can count on one hand how many times I’ve done that here.” 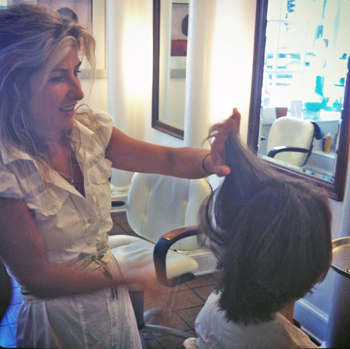 Isabelle Goetz, a native of Belfort, France, who came to Washington as part of an international exchange program when she was 21, styles hair at Isabelle’s Okyo Salon, which she opened two years ago.

“I think the important part of business is to be professional,” Goetz said of landing — and keeping — such a roster. “Get to work early. They cannot worry about you being late.”

She came to Washington when she was 21 through a program with AIPT-CDS, known today as Cultural Vistas, an international exchange program that she found out about while working at the Paris Hair Show.

“I really thought I would live here for 18 months, but it was so successful for me and I love travel,” said Goetz, who worked for 17 years at a salon on 18th Street between L and M before buying Okyo two years ago. “I would just close my eyes and put my finger on a map and then say, ‘OK, New Orleans is good.’ My mission was to see everything here. Work was so good to me and America really was very welcoming and embracing my talent, so 18 months later, I couldn’t leave yet.”

One of her favorite differences between French and American clients is the faith the latter puts in her. “American clients just sit down and trust you,” said Goetz, who oversees a staff of 15. “In France, people may be a little more picky. They come with their idea here, but they let you apply what you want.”

Despite her love of America, Europe remains her muse. “I still go back to Europe to get inspired,” Goetz said. “You can quickly lose the touch. I usually go to Europe every year because I need that inspiration and then I apply it here. The Americans are thirsty for our talents.” 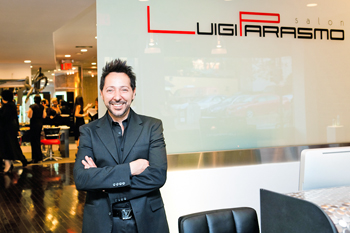 Trained in Rome, Luigi Parasmo opened his Georgetown salon in April after 20 years of working on Washingtonians’ hair, including figures such as Condoleezza Rice.

When in Rome, Luigi Parasmo didn’t always do as the Romans did. And that served him well in his quest to style hair.

“The most important techniques — i.e., my base haircut techniques — allow my clients to move to the next style,” said Parasmo, who opened his Georgetown salon with 11 employees in April. “This was developed in Italy. I was the luckiest man in the world to be able to work for one of the best and most talented hairstylists in Rome and at a young age, he molded me and taught me the art of cutting hair…. It’s very much like building a building: In order to make it stay up, you’ve got to have a strong foundation from scratch.”

Parasmo, who started styling hair at age 14, honed his skills at the Battaglia Hair and Makeup Agency in Milan, where he styled runway models for brands such as Valentino, Armani, Dolce & Gabbana, and Versace.

Having spent 20 years on Washingtonians’ hair after coming to the United States in 1992, working at the Erwin Gomez and Toka salons and getting to brush with D.C. figureheads such as former Secretary of State Condoleezza Rice, Parasmo says he’s learned that hair is very cultural.

“Italian women like to be fashionable at all times and always love the latest in hair and clothing trends. Italy is, after all, the world’s fashion capital — yes, I said it,” Parasmo told us. “However, in the U.S.A., I’ve noticed some big changes recently. More and more people are following fashion trends in big cities like New York and L.A., dictating the fashion and styling rules with pressure from Hollywood and society.”

Parasmo’s partner, Javier Calvo, is co-owner of the salon. The Madrid native also trained throughout Europe, including Paris and London. “The salon was always Luigi’s dream and he wanted me to be a part of it,” Calvo said, “and continue our journey together, just like we’ve been doing for the last 20 years.” 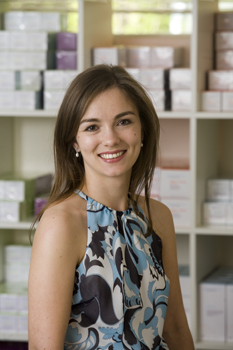 Geneva native Ada Polla chose Washington, D.C., as the base for her beauty line Alchimie Forever.

When Geneva native Ada Polla wanted to sell the moisturizers, cleansers and scrubs her parents formulated in Switzerland to help post-surgical patients in the United States, she knew Washington was the place to do it.

“When I started Alchimie, everyone that I talked to was quite concerned about the fact that I was starting a beauty company in the District and thought I should be in New York or I should be in L.A.,” said Polla, who came to D.C. in 2002 to earn an MBA from Georgetown. “I’m very proud to be a D.C.-based beauty brand because there’s not a lot of us and I feel like I’m doing my part reminding people that D.C. is a lot more than dark navy suits and Capitol Hill.”

Local dermatologist Tina Alster gave Polla her first order in 2004. Since then, the company has experienced double-digit annual growth. The products, all infused with anti-aging and antioxidant ingredients, are sold through partnerships with spas, specialty boutiques and dermatologists.

Polla’s father, Luigi Polla, is recognized as the first medical doctor to introduce pulsed dye laser technology to Europe to help with skin issues such as discoloration. Her mother, Barbara Polla, is a biomedical researcher whose work with heat shock proteins, antioxidants and iron chelation forms the basis of Alchimie’s anti-aging formulation. In 1997, they founded the Forever Laser Institut, the first fully integrated European medical day spa.

“Post-procedure skincare is really how we got started,” Ada Polla said. “While [my father] thought about the products exclusively for his own medical spa clients, I thought there was an opportunity in the marketplace to distribute the line more broadly.”

She felt the American beauty market had a gap in its options for sensitive skin. “If you look at most of the anti-aging lines here or the dermatologist-formulated lines, they’re extremely effective, but they’re all on the quite aggressive side, and so if you’re prone to sensitivity or to allergies or to rosacea, for example, they’re not necessarily products that your skin can tolerate,” she said.

Washington has proved her business instincts right. “D.C. as a whole, whether thinking about fashion or restaurants or even the number of glossy magazines that we have, has evolved, and beauty is obviously a part of it,” Polla said. “People in D.C. are extremely well educated. They’re also aware of countries outside of the U.S. and they’re very curious and happy to shop outside the box.”