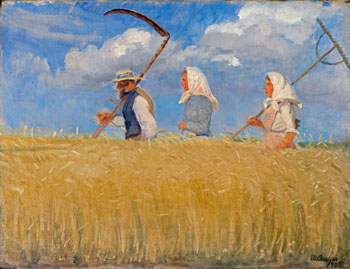 Anna Ancher’s “Harvesters” is among the paintings by the Skagen Art Colony on display at the National Museum of Women in the Arts as part of Nordic Cool 2013.

Danish painter Anna Ancher is not exactly a household name in the United States, but it’s well worth getting acquainted with her — and her colony of artists — courtesy of a large exhibition at the National Museum of Women in the Arts.

The show came riding into town as part of Nordic Cool 2013 at the Kennedy Center, a sweeping festival celebrating the culture of Denmark, Finland, Iceland, Norway and Sweden, as well as Greenland, the Faroe Islands and the Áland Islands (also see February 2013 culture cover of The Washington Diplomat).

But the exhibition “A World Apart: Anna Ancher and the Skagen Art Colony” stands apart from the crowd of events at the Kennedy Center. Likewise, Anna Ancher (1859-1935) herself stands apart and, it’s fair to say, a little above the rest of her peers whose works are included in the display.

That display features 41 paintings and oil sketches by Ancher and more than 20 by artists from the Skagen Art Colony, located in Ancher’s native hometown of the same name, a small coastal village at the tip of Denmark’s remote Jutland peninsula. The community was home to well-known artists such as P.S. Krøyer and Laurits Tuxen, as well as Ancher’s husband Michael.

The Anchers, by virtue of the fact that Anna’s parents owned the only inn and restaurant in Skagen, were integral figures in the artist colony, whose members were attracted to the rural, rugged qualities of the land, where fishing was a dominant economic activity. 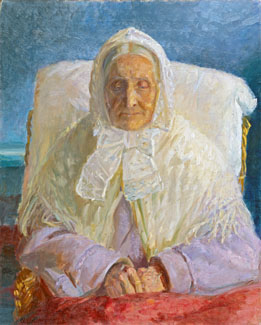 The colony also served as a haven from the encroachment of urban life and industrial development. Against this sleepy yet serene backdrop, Ancher and other Skagen painters embraced a late-19th-century aesthetic called “modern breakthrough” — a break from tradition that didn’t abandon it altogether.

And of all the painters who stayed at the colony, it was Ancher whose works feel the most modern, most daring, and most influenced by the roiling tides of impressionism and post-impressionism, the marks of which can clearly be seen in the color and light that illuminate her subjects.

The artists who migrated to Skagen — Carl Locher, Viggo Johansen, Christian Krohg, among others, from 1870 to the early 1880s — were all influenced by ongoing movements and changes in the art world, trying to escape the neoclassical style of the academies in Denmark and Europe, while learning about realist, impressionist and symbolist styles prevalent elsewhere.

As a result, the paintings in the exhibition aren’t easy to categorize, clustered as they are around thematic sections such as interiors, portraits, the great outdoors and coastal fishing. But one category is clear: Ancher herself, the lone woman and the lone local native among the group.

Her husband Michael was a different sort of painter, though it’s clear the two were a close-knit couple, not so much joined at the hip artistically, but joined by a mutual devotion, respect and appreciation for each other’s work. For instance, when Anna bore their first child, her former teacher at a private art school (women were not allowed to attend the Royal Danish Academy of Fine Arts in Copenhagen), a man named Peter Vilhelm Carl Kyhn, suggested that she should quit painting and attend to her most important task of being a mother. Her husband vehemently defended her. 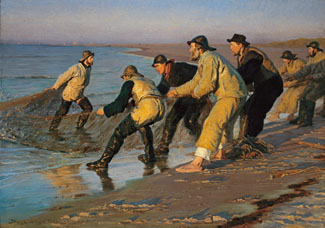 Michael Ancher was particularly interested in depicting fishermen at work, and his energetic, gritty and powerfully realistic paintings stand out in the display. In contrast, softer, more traditional elements of color and brushwork seep into his wife’s paintings of parlors, portraits of women and families, and the countryside.

Yet even though she tended to depict quieter, more humble scenes, Anna Ancher discovered something the others had not: that color and light and their power in tandem make the subjects of her paintings, while less detailed, more emotionally real. In the evocative “Harvesters,” for instance, the billowing colors of yellow grain and blue sky seem to empower the movement of the three figures. Likewise, Ancher’s portraits, especially two remarkable paintings of her mother as well as of her husband at an easel, drive to the heart of the matter and the soul of the subject, even though facial details all but disappear.

But in the section called breakthroughs, her true calling comes through — color and light overwhelm and overtake her work, eventually veering into almost total abstraction in one case. The result is a style that in some places recalls Henri Matisse’s most blinding and joyful work. The colors and light that Ancher captures, whether of the evening sun or a blue wall, shine as the true subjects, energizing her paintings and no doubt inspiring her colony compatriots.

It’s not so much that Ancher was better than her fellow artists, many of whom received more training than her, but her restrained yet illuminating canvases clearly set her apart. She broke the mold, all while staying put in the place she called not a colony, but a home.

A World Apart: Anna Ancher and the Skagen Art Colony