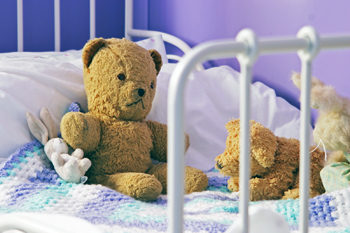 Fair warning: You probably do not want to read this column while eating.

If you are a parent, you’ve probably had your fair share of experience with things that are, well, gross. From poopy diapers to projectile vomiting, raising small children entails seemingly never-ending exposure to bodily fluids and other revolting goop.

But you really haven’t hit the gross-out jackpot until the night when you find yourself sitting under the brightest bathroom light you can find, armed with tissues, suppressing your gag reflex, and digging tiny white worms smaller than the tip of your fingernail out of your child’s rear end.

I’m talking about pinworms. These parasitic worms set up housekeeping in the human intestine. At night, the female worms make their way out to the skin around the anus and lay their eggs there. (I warned you. You really might want to put that sandwich down now.)

When a child either doesn’t want to go to bed or wakes up soon after going to sleep, crying and scratching and complaining, “My butt itches!” you may think it just means they’re not wiping well enough. But these signs also point to pinworms, especially if the itching only happens at night.

But while most people with kids in day care or public schools have probably been through at least one lice outbreak, you may never have heard much about pinworms. That’s probably because it’s even grosser and more embarrassing, given that it involves the nether regions. Seriously, who wants their child to be known as the kid with worms in his butt? They’re also easier to hide, since the itching usually happens at night.

But pinworms are extremely contagious. The eggs can live for up to two weeks outside a human host! What usually happens is something like this: A child with pinworms scratches his bottom. He gets eggs under his fingernails. He touches something else and leaves microscopic pinworm eggs behind. Somebody else gets their hands on that same spot and then puts fingers in their mouths — and the cycle continues. Yes, you get pinworms by swallowing pinworm eggs. Let’s not dwell on that too much. (Oh, and don’t blame the family pet: Dogs and cats do not get or transmit this particular type of worm.)

Here’s the good news: Other than causing that horrific itching, there’s not too much else that pinworms do. You still really want to get rid of them, of course! So what can you do?

Your doctor will prescribe an anti-worm medication. One dose is to be taken right away, to kill the adult worms and the other dose usually about two weeks later, for when the eggs hatch. Some doctors will prescribe the medication for the whole family, even those who don’t have symptoms, since the worms are so contagious; others will suggest waiting to treat until other family members show symptoms. After having gone through this first with my older daughter and then with my toddler, I’m firmly in the “treat early, treat often” camp.

At home, you have a big job to do. Wash all bedding, towels, underwear and pajamas (not just the infected child’s, although you should start with those) on the highest temperature setting your wash machine has; I use the “sanitize” setting. For items that you can’t run through the washer, like pillows and many stuffed animals, stick them in the dryer on high heat for a good 40 minutes.

Repeat this process frequently — even more frequently than you think you need to. When we were on round two with pinworms, I laundered the infected child’s sheets and blankets daily, and the rest of the family’s every few days. Vacuum or wet mop the bedroom floors frequently too — the eggs can get spread around very easily.

This is also the time to reinforce all those lessons about hand washing. Be militant about washing hands before meals, after using the bathroom and before brushing teeth. Clip fingernails short, and if your child is stubborn about nose picking, thumb sucking or any other habit that gets hands in the mouth, redouble your efforts to put a stop to that as well.

Does a child with pinworms need to stay home from school? Most medical experts say there’s really no reason to keep them home. Since the worms exit at night, a child may be most contagious in the morning, so be sure they (and any siblings) do a thorough, surgeon’s-quality job of hand washing before leaving the house.

All of this is not to say that your child got pinworms because you kept a less-than-clean home. They could have ingested the eggs almost anywhere. School, day care, playground, a friend’s house — the list is endless. But once pinworms get a foothold in your household, you can definitely help to get rid of them by getting just a wee bit obsessive-compulsive about sanitation for a few months.

And you’ll stop freaking out every time your rear end itches a little. Eventually.