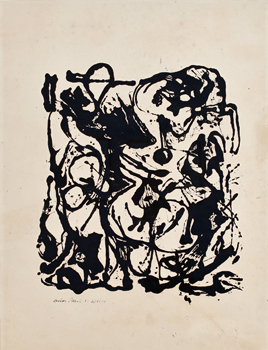 Jackson Pollock’s 1951 “Untitled” is among 55 works by the three abstract expressionists on view in “Angels, Demons, and Savages: Pollock, Ossorio, Dubuffet.”

In American art circles, Wyoming-born Jackson Pollock is widely considered one of the most influential of all the abstract expressionists.

The artist’s mercurial brilliance, evidenced by the wild physical action of his paint-splattered canvasses, is the stuff of legend — and multimillion-dollar sales at auctions around the world.

But a stunning new exhibition at the Phillips Collection reveals that Pollock’s own abstract expressionism was heavily influenced by two other important — if less well-known — purveyors of the form: American artist and patron Alfonso Ossorio and French painter Jean Dubuffet.

The Phillips Collection explores the close and mutually beneficial relationship among the three men in fascinating detail with its latest exhibition, “Angels, Demons, and Savages: Pollock, Ossorio, Dubuffet.”

Featuring 55 paintings and works on paper from 1945 to 1958, the exhibition illuminates a key moment in postwar art and reunites dozens of works by Pollock and Dubuffet from Ossorio’s collection for the first time since their dispersal after his death in 1990.

While Pollock’s work is instantly recognizable and typically satisfying, and Dubuffet’s exemplifies the “art brut” (raw art) style he invented, Ossorio’s much less celebrated paintings steal the show. Born in Manila in 1916 to wealthy Filipino parents, Ossorio attended boarding school in England and later the United States, where he attended Harvard University and eventually settled in the Hamptons, N.Y., in 1951.

The deep-pocketed tastemaker entered the art world as a collector and was a serious patron of both Pollock and Dubuffet. But he also became a serious painter in his own right, as the Phillips exhibition very ably demonstrates.

Ossorio was the central figure among the trio, as an early advocate of Pollock and a close friend of Dubuffet, whose art Ossorio collected and prominently displayed in his elegant but frequently festive Hamptons home.

“Perpetual Sacrifice” — an ink, wax and watercolor on canvas that’s perhaps Ossorio’s most celebrated work — receives front-and-center treatment in the Phillips exhibition, and for good reason. The painting is an explosion of complicated color. Like many of Ossorio’s works, “Perpetual Sacrifice” plays on religious themes and Christian iconography, as the Catholic artist uses intricate orange, red and black strokes to create an abstract image of a human form with an exaggerated heart, at which small figures in black seem to be attempting to claw and tear. Meanwhile, tiny faces of angst and sorrow pepper the remainder of the canvas. 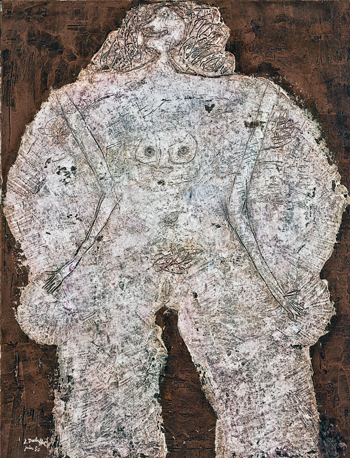 Ossorio’s “Advent,” a work of oil and enamel on canvas, employs a similar abstract human form at its center, but for all the apparent chaos happening on the multicolored canvas, a deceptive symmetry exists. 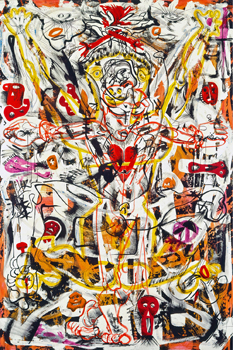 Meanwhile, “Red Family” — perhaps the most arresting of all of the Ossorio works on display here — features a large, sprawling, almost octopus-like figure, presumably a mother, seeming to shepherd her young children. But the canvas has a nightmarish quality to it, with its blood red and deep black colors implying something almost painful. Childlike figures seem to be pressing out against the canvas. In viewing the dense treatment of the paints, one can certainly sense the presence of Pollock’s influence.

While Ossorio’s work is the revelation here, Pollock’s presence in the exhibition is keenly felt, as well. Pollock’s “Number 3” is a fierce representation of the period in the early 1950s that has become known as Pollock’s “black paintings.”

“Number 3” lacks Pollock’s signature splashes of color, but it is among the most primal and powerful paintings in the exhibition. Simultaneously kinetic, angry and sexy, “Number 3” is a powerful testament to Pollock’s passionate brilliance.

Pollock’s “Untitled” has a similar brute force, and in the abstraction the viewer discerns a whirling dervish of action, or maybe even a barroom brawl, as an outstretched arm races across the canvas.

Dubuffet’s work, by contrast to Ossorio’s and Pollock’s, is more rudimentary, even drab. Dubuffet doesn’t do messy, marvelous color, preferring instead blunt forms, earth tones and textures on the canvas. That is not to say the Dubuffet works on display here are boring — far from it.

“Corps de Dame Jaspe,” or “Marbleized Body of a Lady” — oil and sand on canvas from 1950 — depicts the abstract, naked body of a woman, but there is nothing sexual or sensuous about the form. Instead it’s a strange, rich, even mad topography that leaves the viewer disconcerted and disoriented.

Dubuffet’s “La Maison Abandonnée” — translated to “abandoned house” — conjures a melancholy response with its dark browns and oddly tactile surfaces. The French artist was fascinated as a child by illustrations of mentally ill patients and that darkness permeates his work.

“Angels, Demons, and Savages” is a fitting and fascinating tribute to the “savage” style of Dubuffet, the “angelic” iconography of Ossorio and the “demonic” gestural force that permeates Pollock’s timeless art.