Home The Washington Diplomat December 2019 Letter to the Editor 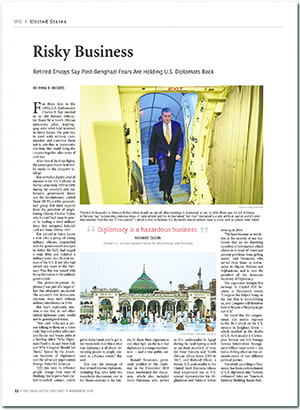 Letter to the Editor

I read Ryan Migeed’s article in the November 2019 issue (“Risky Business: Retired Envoys Say Post-Benghazi Fears Are Holding U.S. Diplomats Back”). I must say that the far-seeing and courageous Anne Patterson presented in the piece bears little resemblance to the Anne Patterson I was familiar with when she was ambassador to Pakistan. She and her staff spent most of their time bunkered in the embassy. It had absolutely nothing to do with government restrictions. This was long before Benghazi. It was that she and her staff seemed to view every Pakistani as a potential assassin and behaved accordingly.

I led one of the three international vote-monitoring efforts in the 2008 parliamentary elections. Because I was one of the few people who had good relations with both the Pakistan People’s Party, which was voted into office in that election, and the Army, two entities that distrusted each other intensely, my sponsoring organization (Centre for Media and Democracy-Pakistan) asked me to stay and engage with each. I was therefore in Islamabad when the Army’s Surgeon General was killed by a bomb.

A television host called and told me about the attack. He then added: “I guess this means we won’t be seeing anything of your ambassador for at least six weeks.” I thought this was a bit harsh. However, about 15 minutes later, I received a call from the head of the Institute of Regional Studies, an Islamabad think tank. He asked me if I could chair a roundtable on Pakistan-American relations there the following week. He told me that Ambassador Patterson had been scheduled to chair it, but had just cancelled. I shook my head, then accepted.

Later that year, I was invited by IRS to deliver a paper at a conference on India-Pakistan tensions. The moment the embassy found that I had been invited, the State Department did everything it could to prevent my going. It began with a call from State, in which the caller told me essentially that if I went to Islamabad I’d get blown up. He even claimed to have intelligence to that effect. The “intelligence” turned out later to be a conclusion that Pakistani terrorists seemed to like blowing up major hotels and since the Marriott had already been blown up, they’d probably be attacking the Serena, at which I would be staying, next.

I told him that running and hiding because a few criminals had issued a few threats was absolutely unthinkable. “Besides, it’s ridiculous to think that there is going to be any kind of happy ending in Pakistan if the good guys aren’t at least as brave as the bad guys, so I’m going,” I added.

He told me that my lack of concern for my own life was up to me, but that if I was attacked, I would be putting the lives of embassy personnel who responded at risk. I was stunned. “Trust me, if I end up bleeding to death in the street, the embassy would be the last place I would call, mostly because I already know that no one in that place would ever risk his life to protect an American citizen,” I replied.

Other people I spoke to who have been to Pakistan with fact-finding duties at that time were given more or less the same spiel and while there were warned by the embassy to avoid going out.

I went to Islamabad, and the conference was great. I calculated that the attendees (from Europe, India, Australia and me, the only American) had learned in three days what otherwise would have taken about six months’ study. It struck me that while just about every Western European embassy had staff attend the entire conference (Switzerland’s ambassador was there for all three days), no one from the U.S. embassy had even stuck their heads in.

As to Patterson’s narrative in regard to engaging with “the opposition” in Pakistan during that time, a word absolutely must be said. She is clearly referring to her meetings with Nawaz Sharif (leader of the then-main opposition party who is currently in prison for corruption) in which she prevailed upon him not to try to bring down the government. By that point, the government was under extreme public and judicial pressure on the subject of corruption. Washington supported it because it was at least friendly to the U.S. and could be enticed to do what we wanted it to do on occasion.

Patterson had nothing much to do with anyone who mattered in the reform movement. Her embassy, as far as I could see, never made a serious attempt to find out what was going on in Pakistan or what the people really thought or wanted. Her efforts were therefore seen by reformers and a large section of the population as outrageous interference in Pakistani affairs amounting to neocolonialism. Trust in our embassy eroded significantly, something we are still paying for.

In my opinion, she is neither a sage nor a heroine.

Thomas Houlahan is a former member of the New Hampshire House of Representatives and an analyst at the Center for Security and Science.