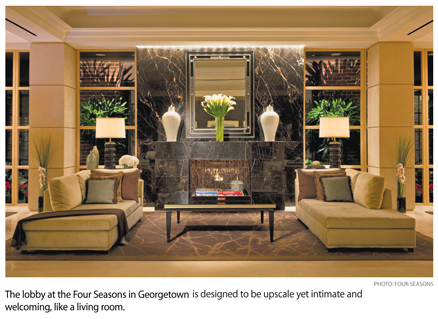 The first impression when you enter someone’s home is the living room. The first glimpse of whether a store’s collection looks promising is through its window displays. And for hotels, the lobby is the heart and soul of a property. It is a beating nerve center where guests are welcomed, business is conducted, visitors can unwind and people get an overall feel for the place and its personality.

With over 130 hotels in D.C. proper, and close to 700 in the Washington metro area, visitors have a multitude of price ranges, amenities and “lobby looks” to choose from, whether it’s cutting-edge contemporary at the city’s Kimpton boutique brands, or stately opulence at the Willard, Hay-Adams or St. Regis.

Whether new or old, though, all establishments are in a constant competition to refine their signature looks and woo guests, especially VIPs and foreign dignitaries — and the lobby is the ideal spot to make a lasting first impressions.

“When you travel a lot around the world, you miss your country, you miss your home,” said Pierre-Yves Rochon, the French designer of the Four Seasons DC’s lobby, who has also worked with the hotel brand in Europe and the Middle East.

In his vision for the lobby’s design, Rochon strived for an upscale yet welcoming, intimate setting that would make guests comfortable and at home irrespective of where that home is. Of course, the “living room” setting of the Four Seasons DC — a hotel that has welcomed the king of Saudi Arabia’s entire entourage — is far from your average American den.

Complete with more than 2,000 pieces of acclaimed art that Rochon singlehandedly picked for display throughout the hotel, including several hundred blue-chip pieces from the likes of Fernando Botero and Andy Warhol, the Four Seasons in Georgetown is a favorite for art enthusiasts. Others can relax on the cushy loveseats in front of the fireplace or get some work done in one of the lobby’s three different sections, while enjoying the interior winter garden. 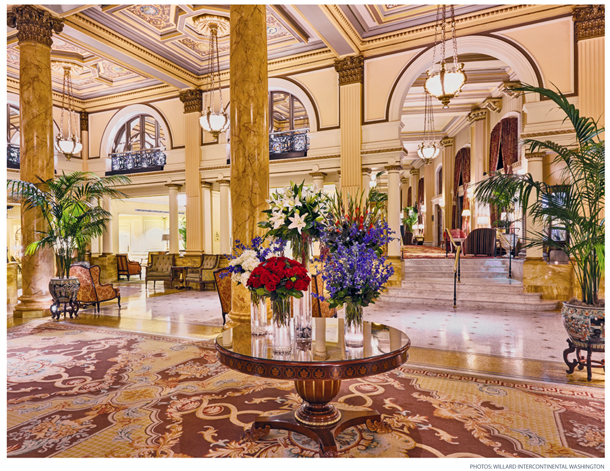 While some lobbies strive to be a home away from home, others pride themselves on being steeped in history — or where history actually happens. 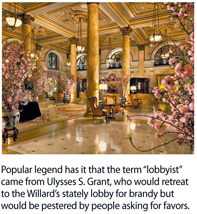 The Willard InterContinental on Pennsylvania Avenue, often referred to as the “residence of presidents,” boasts the quintessential Washington lobby — an ornate hub of history and present-day activity. Legend has it the term “lobbyist” was coined in the hotel’s grand lobby, where in the 1860s, Ulysses S. Grant would quietly retreat for a glass of brandy and a cigar until “petitioners” eventually got wind of his presence and sought him out to lobby for their cause. The myth has since been somewhat debunked but still makes for a fun story.

Other moments in history at the hotel definitely happened. American writer Nathaniel Hawthorne once wrote that the Willard “may be much more justly called the center of Washington and the Union than either the Capitol, the White House or the State Department.” Abraham Lincoln lived at the hotel before his inauguration in 1861. Decades later, just before Martin Luther King Jr.’s March on Washington in 1963, the civil rights icon put the finishing touches on his “I Have a Dream” speech in the Willard.

Today, the Willard lobby is still a showstopper and mainstay on the D.C. hotel circuit. The hotel’s Peacock Alley, decadent with gold and Bordeaux accents, is a perfect spot to have an elegant afternoon of tea and pastries — and impress out-of-town guests who want to recreate “House of Cards” shenanigans. Or head over to the clubby Round Robin Bar, where politicos and, yes, lobbyists still meet for a stiff drink. 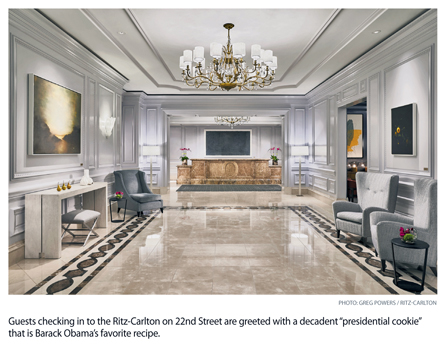 Other lobbies eschew Old World charm in favor of a more contemporary vibe. Another of D.C.’s finest hotels, the Ritz-Carlton on 22nd Street, punctuates its sleek lobby with homey touches to make guests feel welcome. For the travel-weary guest, nothing screams D.C. more than a deliciously rich “Presidential Cookie” to munch on during check-in. Former first lady Michelle Obama shared her husband’s favorite recipe — white-and-dark chocolate chip cookie with a hint of mint — with the hotel. The Ritz also makes a mean shortbread sugar cookie, a recipe once enjoyed by President Dwight D. Eisenhower.

For guests who need something a little stronger, the Ritz’s Quadrant lobby lounge — named after the four sections that divide the capital — offers a unique cocktail experience at The Vault, a six-foot-high combination safe protecting the hotel’s “most magnificent and rare reserve spirits.” Guests will pay upward of $250 to $5,000 for two ounces of reserve, so the hotel’s lead mixologist Chris Mendenhall makes sure to put on a show, punching in a code for the vault and donning special white gloves to handle the bottles.

In an age of Instagram where everyone lives vicariously via a cellphone, beautiful presentation and elaborate experiences are non-negotiable. Every corner, tabletop and wall must be picture-perfect as it will eventually end up as an actual picture online. At the Park Hyatt, guests entering the lobby will instantly want to snap a photo next to the two large-scale, six-sided, transparent glass cherry blossom sculptural boxes by artist Amanda Weil. In an often-dreary Washington weather, this cheery display helps preserve springtime all year long. 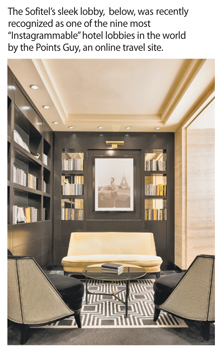 “We needed to make a strong statement about Washington, one that you would experience the moment you walked in, but in a subtle way — a gesture that didn’t feel gimmicky,” said the hotel’s designer, Tony Chi, of the Park Hyatt’s refined, sophisticated Americana style.

The Sofitel Washington DC Lafayette Square also has the approval of the social media gods and was recently recognized as one of the nine most “Instagrammable” hotel lobbies in the world by the Points Guy, an online travel site. The hotel’s eye-catching décor includes an oversize emerald velvet sofa with a back that scales the wall. The piece is supposed to evoke the green watered-silk fabric coverings on the walls of the White House’s Green Room, a design chosen by Jackie Kennedy in 1962.

The Sofitel’s design scheme blends history with modern-day flair. Its Parisian touches are a nod to the longstanding links between Washington and France, which played a key role in the American Revolutionary War and whose architecture inspired D.C.’s layout. Black-and-white photographs of major D.C. and Parisian landmarks provide an interesting contrast to funkier design elements such as dangling orb light fixtures.

The Sofitel’s lobby also pays attention to the details, such as a scent box where guests can explore French fragrances unique to the brand. Sofitel uses scent marketing provider Air Aroma to create its signature scent, which includes bright notes of bergamot, white rose, jasmine of grasse, sandalwood and lentisque. 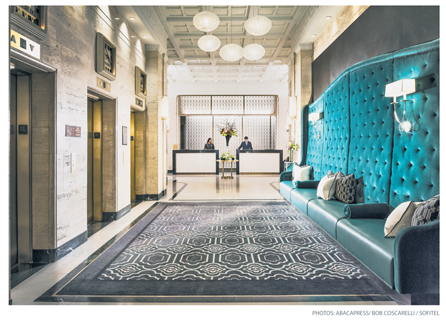 The Kimpton boutique brand is known for its modern, chic décor, but it too combines the old with the new. One of its latest additions, the Kimpton Carlyle Hotel Dupont Circle, began life as the Granite State Apartments in 1941. It transitioned to a hotel in the late 1970s and has been a Dupont Circle Art Deco landmark ever since. Internationally renowned artist Michele Oka Doner, tackling her first U.S. hotel design project, drew on her experiences in Miami Beach to restore the building to its original grandeur. The gleaming renovated lobby is dotted with hexagonal marble floor tiles, historic mixed-metal railings and rich woods, which are enhanced by Oka Doner’s signature bronze chandelier in an abstract floral form.

The adjacent “living room” features a curated rotating gallery of artwork by local and international artists. Reflecting the building’s original identity as an apartment building, the living room includes a communal table for guests to congregate and a design scheme defined by organic shapes and soothing neutral colors. Soft urban lighting complements the plush sofas and chairs for a warm, inviting atmosphere.

The living room’s showpiece fireplace is flanked by a bronze eagle and lion relief, above which hangs a funky mosaic of black-framed mirrors that bounce light from the ends of the room. On either side, the fireplace is surrounded by mirrored obelisks, an homage to the building’s architect. The centerpiece of the space, however, is a life-size, 230-pound steel lion sculpted by artist Brian Mock that was carefully crafted from recycled materials to reflect Kimpton’s whimsical yet eco-friendly style. 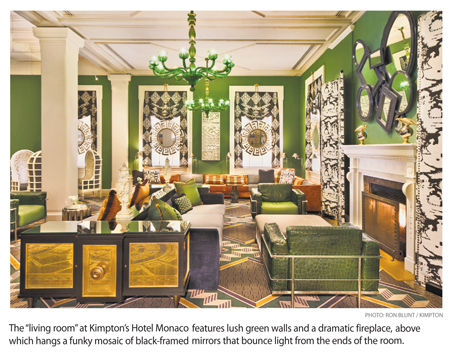 While many hotels pay homage to Washington, D.C., and its roots, they also don’t forget to cater to the international tastes of their guests.

The Fairmont, for instance, strives to ensure that its foreign guests feel at home as soon as they set foot in the lobby. For VIPs or visiting delegations, greeters speaking the guests’ native languages will often meet them and assist with check-in.

A welcome beverage specific to the guest’s homeland or culture may also be served in the lobby, whose décor can also be tailored to display the national flower or flag of foreign guests. For both out-of-towners and locals, the hotel’s lobby features a glass-enclosed loggia overlooking the Fairmont courtyard, where guests can cozy up in front of one of three toasty fire pits.

According to Destination DC, the city’s marketing arm, a record 22 million visitors came to the nation’s capital in 2016, up 3.3 percent over 2015 — that includes 2 million people from overseas. For many, their first stop is the hotel lobby. And whether it’s toasty fire pits, repurposed lions, comfy sofas, pricey drinks, big-name artwork or picture-perfect settings worthy of Instagram, area hotels are pulling out all the stops to make their guests feel at home while enjoying a unique escape.