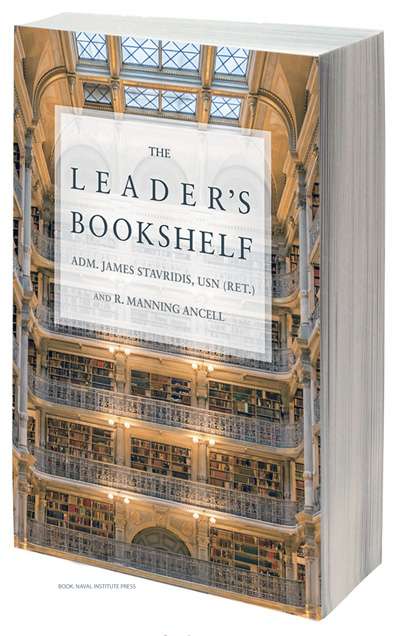 In an interview with The New York Times during the final week of his presidency, Barack Obama discussed how reading books had been critical to his leadership — and his equanimity — during eight grueling years in the White House. Obama observed that books had been an important source of ideas and inspiration. The presidency, he said, is an office in which problems often rush at you with breakneck speed and the occupant must absorb massive amounts of information. Obama said that reading books gave him a chance to “slow down and get perspective” and also to “get in somebody else’s shoes.”

“They have allowed me to sort of maintain my balance during the course of eight years, because this is a place that comes at you hard and fast and doesn’t let up,” he said. Obama added that presidential biographies helped him counter the tendency to think “that whatever’s going on right now is uniquely disastrous or amazing or difficult.” As an example, he cited the value of reading about President Franklin D. Roosevelt confronting both a Depression and a World War. FDR’s challenges put his own into a better perspective, he said.

The interview with Obama raised intriguing questions about the relationship between reading and leadership and how diligent reading prepares leaders and sustains them during difficult times.

This is the subject of “The Leader’s Bookshelf” by Adm. James Stavridis and R. Manning Ancell. Stavridis spent more than 35 years on active service in the U.S. Navy, rising to the rank of a four-star admiral. He served as the 16th Supreme Allied Commander for NATO, where he oversaw operations in Afghanistan, Libya, Syria, the Balkans and piracy off the coast of Africa. He is now the dean of the Fletcher School of Law and Diplomacy at Tufts University. Ancell was a former lieutenant commander in the Navy Reserve and has written extensively on leadership.

The premise of their book is that organized and careful reading can strengthen leadership skills. They posit that many good leaders have been voracious readers and often attribute their success, at least in part, to books. Stavridis and Ancell argue that while leadership is not exclusively learned from reading books, serious reading can sharpen skills, broaden perspective and spur self-improvement.

“The Leader’s Bookshelf” is comprised of seven short chapters by the authors on reading and leadership and a list of 50 books that have been recommended by military leaders. Stavridis and Ancell interviewed more 200 four-star officers (admirals and generals) over the last several years about the books that influenced them. Their list, they say, is an “admittedly non-scientific but fairly comprehensive survey.” Focusing on the reading patterns of the most senior officers in the U.S. military allowed them to “create a set of books that makes sense for leaders in all walks of life.”

Stavridis argues that many leadership skills are bestowed at birth, such as emotional intelligence, a pleasing appearance, a smooth and soothing voice, and a commanding physical presence. But he adds that many of the best leaders evolved over time and reading has often been critical to their maturation.

Stavridis believes reading is important for several reasons. It allows readers to meet remarkable people, visit intriguing places and experience significant historical events without ever leaving home. Reading can also trigger self-evaluation, compelling readers to frequently ask themselves: “What would I have done in that situation?” Reading allows people to study those they admire and learn the keys to their success. It can also improve their own writing skills.

With this context, the authors present their list of the top 50 books that “can help virtually anyone become a better leader,” with short entries on each book.

The top 50 list includes titles that are not surprising and are in some sense required reading: “The Bible”; “The Art of War” by Sun Tzu; “On War” by Carl von Clausewitz; “The Second World War” by Winston Churchill; “The Personal Memoirs of Ulysses S. Grant”; and “Crusade in Europe” by Dwight D. Eisenhower.

There are also more recent books: “Team of Rivals” by Doris Kearns Goodwin; “Dereliction of Duty” by H.R. McMaster; “Truman” by David McCullough; “The 7 Habits of Highly Effective People” by Stephen Covey; “From Beirut to Jerusalem” by Thomas Friedman; “The Best and the Brightest” by David Halberstam; “A Peace to End All Peace” by David Fromkin; and “Balkan Ghosts” by Robert Kaplan.

Lists of this sort provoke discussion and stimulate debate. That is part their purpose. I was surprised that more top-tier novels did not make the list, such as “War and Peace” by Leo Tolstoy; “Don Quixote” by Miguel de Cervantes; “The Grapes of Wrath” by John Steinbeck; and “All the King’s Men” by Robert Penn Warren. Their list does include “To Kill a Mockingbird” by Harper Lee; “A Connecticut Yankee in King Arthur’s Court” by Mark Twain; and “A River Runs Through It” by Norman Maclean. 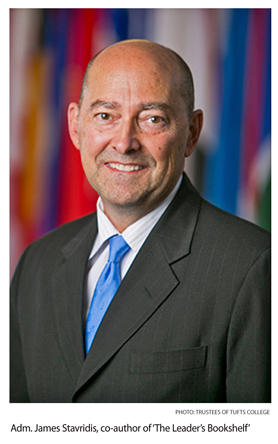 The weakest feature of the book is the specific discussion of the 50 books. The book summaries are uneven. Several are good, but many are vague and rambling, and the sections on leadership lessons are filled with clichés and truisms.

Several of the books are of clear relevance to current affairs. H.R. McMaster is the national security advisor to President Donald Trump and his book, “Dereliction of Duty,” has gained fresh prominence. It describes how the top echelons of the U.S. military brass did not speak truthfully to Presidents John F. Kennedy and Lyndon B. Johnson about the military morass in Vietnam. Stavridis derives important leadership lessons from McMaster’s book. “Strong leaders must follow the truth wherever it leads. Nothing is more dangerous than a subordinate who will share or alter the truth in order to curry favor or impress the boss. Leadership must be built on teamwork, mutual respect, and above all a shared sense of common objective,” Stavridis writes.

If the book summaries in “The Leader’s Bookshelf” are disappointing, its chapters on the art of reading are stimulating and quite practical. Stavridis notes that busy leaders almost always find it difficult to find large blocks of time to read, but he emphasizes that it’s critical to carve out time to read, even if it’s in 10- or 15-minute increments.

“Without finding the time to build real intellectual capital you will soon burn through what you have. A good leader is constantly recharging the knowledge bank, and reading is the best and most efficient way to do that,” he writes.

Stavridis recommends blending good fiction and non-fiction, including plays, poetry, memoirs and autobiographies. He also argues that it’s essential to find time to think after you read. This involves taking notes, reflecting on the book and discussing it with others. “It is not enough to simply read, however; a strong leader reads but also processes what he or she is reading to create real thoughts. These should be more than just musings that pass along like shadows over a field; they should be considered and recorded. Good leaders write down their thoughts,” he says. And these ideas, he declares, should be “sent into the world to survive contact with friends, allies, critics and enemies alike.”

Stavridis, echoing the point made by Obama, suggests that good reading helps put life into perspective. “Making sure you understand which events truly matter is a key skill for a leader. We are too often distracted by the mundane and day-to-day pressures of our email and our inbox and forget to step back and put things in the prioritized queue,” he writes.

In a chapter on building a personal library, Ancell interviewed Secretary of Defense James Mattis about the importance of reading in his life. Mattis credits reading with helping him weigh the cruelty of war with humanity’s remarkable artistic and cultural achievements. “So you develop by broadening your understanding of human nature, of the ascent of man and everything else so you can reconcile war’s realities, grim as they are, atavistic and primitive, with human aspirations, without becoming a narrow minded-person,” Mattis tells Ancell.

One issue that I would have liked the authors to directly consider is the tension between reading an endless stream of books versus reading a smaller number, but taking more time to absorb them. Many of the readers described in this book should be lauded for their diligence and commitment to reading; however, I occasionally wondered if the focus was too heavily slanted toward the sheer number of books they read. I recalled an essay many years ago about the reading habits of Abraham Lincoln and Thomas Jefferson. Jefferson was classically educated, owned a massive library and read voraciously in several languages. Lincoln was self-educated, had a modest library and read only a handful of books such as the Bible and a collection of Shakespeare. But he returned to these books frequently and absorbed them fully. I still am not sure whether Jefferson’s broad reading or Lincoln’s deep reading is the better approach.

Nevertheless, “The Leader’s Bookshelf” is a valuable resource that will help readers assemble a good list of books to consider and suggest how to study them so they can improve their leadership skills.