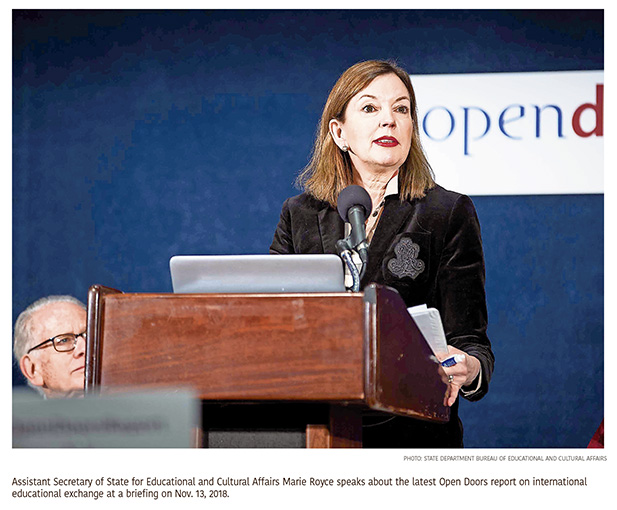 President Trump nominated her to be the State Department’s assistant secretary of state for educational and cultural affairs (ECA), and she sailed through her confirmation hearing with the unanimous backing of the Senate, leading to her swearing-in on March 30, 2018.

Royce has spent more than 30 years working in the private sector for businesses ranging from start-ups to Fortune 500 companies. Her international experience prior to the State Department includes being a business liaison to 80 countries and leading an international grant program between two universities as a former professor.

A popular figure on the diplomatic circuit, Royce could often be seen at embassy receptions. Now, she still works closely with embassies and foreign governments, but with a focus on promoting U.S. foreign policy through educational, cultural and sports exchanges.

And it’s kept her busy. She often stops by to deliver remarks at various functions, whether it’s the launch of the Women and Entrepreneurship International Visitor Leadership Program; the U.S.-Greece Strategic Dialogue; the espnW: Women + Sports Summit; or hosting a Facebook Live panel discussion with Fulbright Program participants during International Education Week.

The Fulbright Scholar Program is a cornerstone of the State Department’s education agenda. Roughly 1,600 U.S. students, 4,000 foreign students, 1,200 U.S. scholars and 900 visiting scholars receive Fulbright grants, in addition to several hundred teachers and professionals. Approximately 370,000 Fulbright scholars have participated in the program since its inception in 1946.

Royce often works with embassies to highlight Fulbright’s longstanding relationships with various countries such as Italy and Switzerland. In September, for example, she traveled to Britain, Greece and Finland to engage with their respective Fulbright commissions while also encouraging more U.S. students to study abroad.

The Fulbright Program was one of the few education and cultural initiatives at State that wasn’t targeted for drastic cuts in Trump’s fiscal 2018 budget. But most of the proposed cuts to State Department funding never passed muster on Capitol Hill. While many Democratic and Republican lawmakers, including Royce’s husband Ed, agree that the State Department and USAID are overdue for reforms, they’ve consistently advocated for strengthening American diplomacy and shot down budget cuts that many viewed as draconian.

As a result, most education programs at Foggy Bottom have remained intact, giving Royce a strong mandate.

She took time out of her busy schedule to answer questions about her role as an assistant secretary at State.

The Washington Diplomat: How does your previous experience play into your current role?

Marie Royce: My experience as a former corporate executive and educator has translated very well into my current role as assistant secretary of state. At the Bureau of Educational and Cultural Affairs, we facilitate exchange programs that range from professional exchanges to cultural exchanges. At the core of our exchanges is creating people-to-people connections. 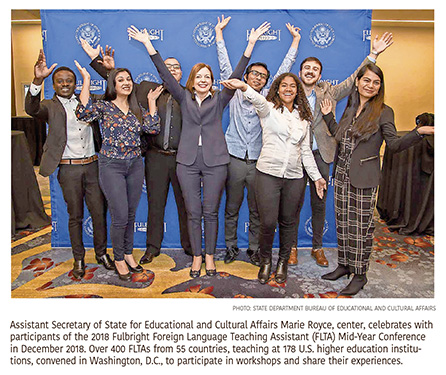 I’ve had many opportunities to interact with classroom and exchange participants at an organic level, where my skills as an educator have been useful. I treasure my time as an educator, and I fully understand the power of education in diplomacy.

As a former corporate executive, I had to manage and interact with people from a wide variety of backgrounds and nationalities. At the State Department, that is also a crucial part of the everyday job. From our program officers to ambassadors, I have the opportunity to meet someone new and learn something new each day.

Additionally, I am an exchange participant alumna myself. In 2001, I traveled to Poland and Hungary through the American Council for Young Political Leaders (ACYPL) exchange program. I joined colleagues from different ends of the political spectrum and from different parts of the country on one of the first trips overseas following 9/11. By the end of the trip, we were a united group. I still keep in touch with my ACYPL colleagues today. The impact that exchange programs have in the lives of participants is immeasurable.

TWD: You were sworn into office at the end of March 2018, so it’s been a relatively short period of time. What was the learning curve you had to master?

MR: Educational and cultural exchanges are often some of the first engagements that the United States has when establishing diplomatic relations with another country. Of course, there are always challenges when you start a new role. But I am looking forward to promoting the new initiatives we are spearheading in the bureau.

The goals for my bureau include advancing American foreign policy objectives, increasing Americans’ global competitiveness, countering disinformation and radicalization, encouraging strong civil society institutions and ensuring our programs are effective. I’m told it’s the most comprehensive strategy ever written by the bureau.

TWD: Your portfolio is educational and cultural affairs. That covers a lot. What are you focusing on in these areas?

MR: I am very enthusiastic about promoting and strengthening the department’s cultural and educational diplomacy efforts on a global platform. As you mentioned, this is a great responsibility, and given the administration’s America First approach to foreign policy, my team and I are keen to showcase how ECA’s exchange programs are beneficial to American citizens.

When exchange students are visiting the United States, the money they spend in local communities helps to boost the economy. In fact, 97 percent of our budget goes to American organizations and businesses. Additionally, our programs foster mutual understanding between participating countries, which results in making our homeland more peaceful and secure.

I am really passionate about all of our programs. We have flagship exchanges such as Fulbright and the International Visitor Leadership Program that are our focus, but we’ve also been exploring new and innovative ways to connect people around the globe. I’m particularly excited about the Stevens Initiative, which is a virtual exchange program that connects U.S. students with young people at universities in the Middle East and North Africa to build career and global competence skills.

I am also very focused on diversity. Whether it’s providing women with the skills needed to thrive in male-dominated fields such as STEM through TechWomen or promoting inclusion for people with disabilities through Sport for Community, our team seeks to ensure our programs are all-encompassing.

TWD: If you work under a tightened budget, what do you prioritize?

MR: As assistant secretary, I have to ensure that the bureau is able to respond quickly and positively when there is a foreign policy challenge or a diplomatic opportunity. Exchanges have been around for more than 75 years because we have always had bipartisan support for the work we do. I am proud of that. I am also proud that nearly one in three world leaders today are alumni of our programs. That is a tremendous return on investment for our country. 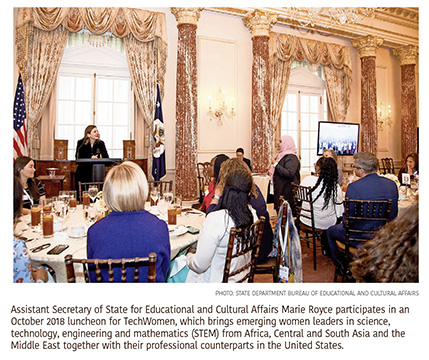 No matter what budget we receive, we will continue to focus on proven programs for American and foreign young leaders, professionals and students that have both the scope and flexibility to serve the U.S. national interest. ECA was the first bureau in the State Department to establish a full-time evaluation office, and I am committed to a culture of measurement and accountability to the American taxpayer.

TWD: What are the highlights so far of your job?

MR: I have experienced so many great moments thus far. I’m honored to work alongside the extraordinary men and women of the bureau that work tirelessly to further our mission.

It has been rewarding to travel around the globe to meet with stakeholders and program alumni to discuss the impact of our exchange programs, best practices and to share new ideas. The highlight of my trip to Thessaloniki, Greece, was attending the Digital Communicators Network Influencers Forum, where I engaged with participants on the importance of creating networks to combat disinformation. It was energizing to meet so many people who care so passionately about their countries’ futures.

I was particularly honored to participate in the commemoration of the 70th anniversary of the U.S.-U.K. Fulbright Commission in September at Parliament. This partnership has made history by producing 13 Nobel Laureates, three members of the U.S. Congress, at least seven members of the British Parliament, six MacArthur fellows and 22 Pulitzer Prize winners.

I was also honored that Ivanka Trump has helped us support the work of the bureau, and that we could have several strategy sessions together. She has made videos for us, including our Young African Leaders Program, and met with several groups of amazing women participants, including the Trafficking in Persons Report Heroes and the Fortune-State Department Global Women’s Mentoring Partnership. We look forward to working with her on projects to empower women around the globe.

TWD: What do you hope to accomplish overall in your position?

MR: My team will tell you that I try not to let a U.S. ambassador leave Washington without meeting with me first. If you look at my calendar, there is barely a moment when I am not meeting with someone. And that’s what I want people to take away, that I am passionate about exchanges because exchanges matter to foreign policy.

Exchanges are in the national interest. This year, we launched five new exchanges in the area of religious freedom, because that is an enduring priority. These exchanges focus on religious pluralism in the United States and the protection of minority populations.

I want ECA programs to be representative of the diversity of American political, social and cultural life. Through all of our exchanges, we must keep our eye on the prize: promoting American leadership and furthering American values and foreign policy goals.

And I hope to expand our work to promote American prosperity. We are increasing the global skills of Americans and furthering the reach of U.S. businesses and institutions through several existing, and some new, programs. My goal is to continue to form more public-private partnerships over the next couple of years. As we do, exchanges will expand, and the State Department will be helping American companies meet the future leaders of tomorrow.