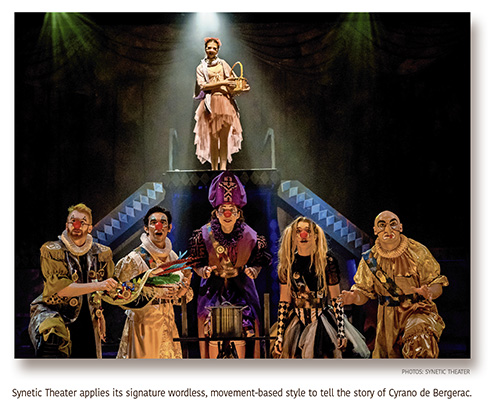 Without a doubt, Cyrano de Bergerac, the title character of Edmond Rostand’s 1897 play of the same name, is one of the great wordsmiths of romantic literature. Like the biblical Aaron, who gives voice to his more famous brother, Moses, Cyrano, a soldier and brilliant poet, articulates the longings of the handsome but tongue-tied lover Christian toward the object of their mutual affection, Roxane.

Language is the medium by which Cyrano overcomes the stigma of an enormously long nose, protects himself from ridicule and indirectly expresses his feelings for Roxane. It’s nearly impossible to imagine Cyrano apart from his rapier wit and the dulcet cadences of his poetry.

How surprising, then — and how bold — of Synetic Theater to take on “Cyrano de Bergerac” in one of their signature wordless, movement-based productions. Having tackled “Hamlet,” “Faust” and other world-class dramas renowned for their verbal gymnastics, perhaps Synetic felt “Cyrano” (the title given to this adaptation) was not such a stretch after all.

There are hurdles to overcome, however. Many audience members will not be intimately familiar with Rostand’s late 19th-century masterpiece, apart from Steve Martin’s 1987 film adaptation (which transforms the original tragedy into a romantic comedy). Similarly, the linguistic fireworks that are Cyrano’s trademark and by which he makes his way in the world can only be suggested here. 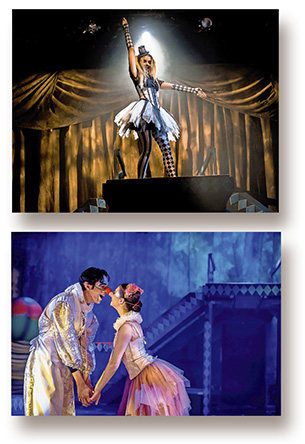 Nonetheless, as adapted by Nathan Weinberger and debut-directed by Vato Tsikurishvili, who also plays Cyrano, this wordless adaptation of a highly verbal play offers dazzling visuals, incorporating the fluid movement, dance and acrobatics that are synonymous with Synetic productions. It was choreographed by Vato’s mother and company choreographer, Irina Tsikurishvili.

Particularly striking is Tsikurishvili’s decision to locate the story in the métier of clowning. (In the director’s notes, he suggests a connection between Cyrano and the great clowns of cinema, who sometimes appear to use comedic genius to cover inner pain.)

The set design by Phil Charlwood evokes the inside of a commedia dell’arte theater, with its double staircase, top platform, multiple archways and tall rear draperies. Similarly, each character appears wearing clown nose and makeup, dressed in a motley costume suitable for acrobatics or for telling jokes. Of course, Cyrano’s proboscis nose is more prominent than all the others.

Combined with sound design by Konstantine Lortkipanidze, the effect can sometimes be dreamlike, especially in the earlier stages of the story, but it can also border on the manic, as when the character of Time (an addition of Tsikurishvili’s that is played by his sister Ana) steps in to remind Cyrano that the opportunities to express his true love for Roxane — and possibly win her for himself — are slipping away. Cyrano is a man overcome by his fear of rejection.

There are many lovely moments to appreciate in this production: An early “swan dance” by Roxane (Maryam Najafzada), in which she appears to lose her feathers; an intense pas de deux in which Cyrano’s commander, de Guiche (Philip Fletcher) attempts to take Roxane for himself; a hilarious (and central) scene in which Cyrano helps fellow soldier Christian (Matt Stover) write a love letter to Roxane; and recurring military “lineups” that feature de Guiche giving orders to his marionette-like recruits.

Physical acrobatics abound throughout the production and are nowhere more moving than in a late reunion scene involving a now bent and walker-bound Cyrano and Roxane. Time has passed them by, as Tsikurishvili rightly emphasizes, but the memory of what might have been lingers in the air. Was Cyrano such a clown to surrender to his (real or imagined) fear and for never expressing himself to Roxane? Were they all clowns for playing a game with their loves and desires? Are we all clowns because, in the end, we can do little more than laugh at what is, ultimately, a tragic fate?

Tsikurishvili sends us away thinking about these things, the tick of time at our backs, perhaps reflecting on what we may or may not have said when it came to matters of the heart. It may be that the only thing we can really do now is move.

Deryl Davis is a freelance writer and adjunct professor of drama, literature and film at Wesley Theological Seminary in Washington, D.C.