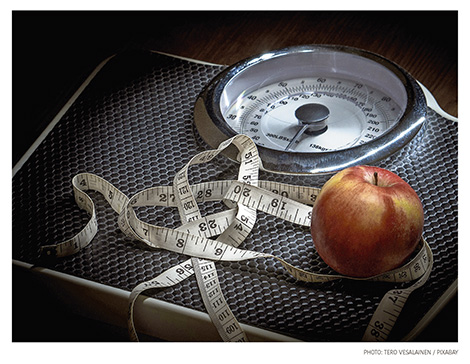 As more young American adults struggle with extra weight, they are paying an even steeper price as the rates of obesity-related cancers rise in this age group.

Obesity has already been linked to rising rates of type 2 diabetes, heart disease and knee replacements. Now, new research suggests cancer can be added to that list, and the rate of obesity-related cancers is certain to keep climbing among those ages 25 to 49, researchers report.

“The fact that increases were mostly in obesity-related cancers is due to the obesity epidemic, and we would expect that the incidence would increase as this younger population ages,” said lead researcher Dr. Ahmedin Jemal. He is scientific vice president for surveillance and health services research at the American Cancer Society.

In fact, these cancers are rising faster among younger adults than older folks, and that could stall or reverse years of progress in reducing cancer deaths, the study authors said.

To try to curb the trend of rising cancers among the obese, Jemal thinks that primary care doctors need to screen all their patients for obesity. Family doctors also need to counsel patients to lose weight.

Although screening for most of these cancers isn’t available or useful for younger patients, colon cancer is an exception, Jemal said.

Last year, the American Cancer Society lowered the age to start colon cancer screening for people at average risk from 50 to 45.

Communities, too, need to take actions to promote healthy lifestyles, Jemal suggested. These can include mandating calorie counts on prepared foods and restaurant meals, and restricting sales of sugar-sweetened drinks. In addition, communities can provide more opportunities for people to exercise by creating bike and walking paths.

According to the study, the cancer incidence increases were particularly severe in six of the 12 obesity-related cancers. These include cancers of the colon, uterine, gallbladder, kidney and pancreas, and multiple myeloma — a bone marrow cancer.

Jemal’s team looked at 18 other types of cancer, but only two showed a similar increase, while eight cancers related to smoking showed a drop, and the rest remained stable.

For the study, the researchers analyzed data from 25 state cancer registries that cover 67 percent of the U.S. population. The investigators looked at 30 of the most common cancer types, including 12 obesity-related cancers, diagnosed from 1995 through 2014.

Incidence of multiple myeloma and cancers of the colon, uterus, gallbladder, kidney, pancreas and thyroid increased in younger adults, the findings showed.

However, although the rates are increasing faster among young adults, the overall rate is lower than among older adults, according to the report. 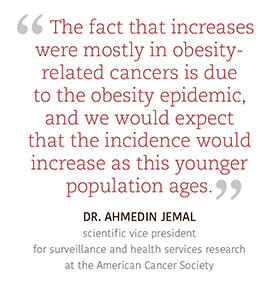 The rate of breast cancer, also obesity-related, has not changed in young women. It could be that some types of breast cancer are on the rise while others are in decline, the researchers suggested. Other factors, such as changes in screening age and age at first pregnancy and number of children, might also play a role.

These findings seem to reflect the obesity epidemic that has been raging for 40 years, the study authors said. In the United States, the rate of obesity more than doubled between 1984 and 2014.

Obesity is one of the most preventable causes of cancer. About one in 12 cancer cases in the United States are caused by excess weight, the researchers noted.

Obesity is an emerging risk factor that is driving a number of important cancers, said Elizabeth Platz, a scholar in cancer prevention at Johns Hopkins Bloomberg School of Public Health, in Baltimore, Md.

Platz believes the problem is so vast that targeting individuals won’t make a dent in the obesity epidemic.

She also doesn’t think that a magic pill to lose weight, if one existed, is a good approach. Going down that path could lead to a host of new problems and side effects, Platz said.

“Changes have to happen at a societal level,” she suggested. “What this study is showing is that it’s generations of people.”

Cultural change — getting people to eat less and exercise more — is needed, she explained. “We need the political will,” Platz said.

The report was published online Feb. 4 in The Lancet Public Health.

For more on cancer and obesity, visit the U.S. National Cancer Institute at www.cancer.gov/about-cancer/causes-prevention/risk/obesity/obesity-fact-sheet.