Such is the crux of the emotionally charged political and familial drama that unfolds between two iconic rival queens in the Folger Theatre’s brilliant staging of “Mary Stuart.”

Peter Oswald’s highly accessible modern translation of Friedrich Schiller’s play has been seen on London’s West End and Broadway to critical acclaim, receiving seven Tony nominations including Best Revival of a Play. The script eloquently delivers the tragic historical tale of how Queen Elizabeth I of England, a Protestant, imprisoned her Catholic cousin, the ousted Queen of Scots Mary Stuart, and proceeded to toy with Mary’s fate as she vacillated over whether to sentence Mary to death on charges of attempted murder.

The script is not an easy one. The expressive dialogue is fast-paced and word-heavy and the plot line is circuitous, fueled by both women’s jealousy, vanity, religious rivalry, pride and dread of losing control.

Luckily, director Richard Clifford cast two of Washington’s most accomplished veteran thespians — Kate Eastwood Norris as Mary Stuart and Holly Twyford as Queen Elizabeth — against each other in this nuanced battle for royal dominance. The production flows as seamlessly as if the actresses were born to embody these roles.

The fervor with which Norris and Twyford play these headstrong divas is nothing less than exhilarating to watch. The two have a long history of playing opposite each other at the Folger — as servants in “The Two Gentlemen of Verona” in 2004 and as Katherine and Tranio, respectively, in 2012’s “The Taming of the Shrew,” for example — and their acting chops here mesh in harmony and are equally matched in force and distinction. The result is a nail-biting showdown that, although it chronicles events in the 16th century, seems as current as if it was just now unfolding, causing the show’s two and a half hours to fly by in a prolonged bated breath.

The beauty and depth of this play stem from the fact that both queens are at once sympathetic and corrupt. Although Elizabeth clearly calls the shots from the safety of her luxurious throne, she is tortured by her inevitable decision to end a life and save her crown, while fearing backlash from Catholic zealots if she does. Meanwhile, defenseless Mary, from the confines of a desolate dungeon, tries to turn England’s closest advisors against their queen, hoping to usurp the royal reins from her cousin. 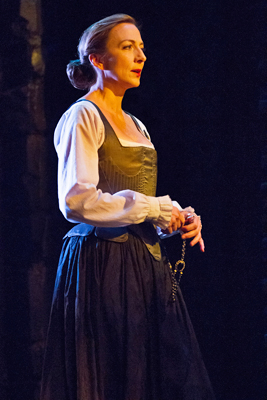 Schiller’s script strays a bit from actual history, but in doing so, adds depth to the characters and plot intrigue. For example, he adds a face-to-face meeting between Mary and Elizabeth that never happened and creates a love triangle between the two women and the Earl of Leicester.

Another of Schiller’s embellishments, according to Folger dramaturg Michele Osherow, is a more sympathetic Mary “who admits to and suffers from remembrance of crimes past; if the actual Mary Stuart confessed to felony, the record’s been expunged.”

Although Mary’s sordid history contains failed marriages and an accusation that she killed a husband and married his murderer, Norris’s portrayal successfully paints her as the zealous and righteous Catholic begging for her life and believing that love can save her. Meanwhile, Twyford’s interpretation of Elizabeth is a luxurious study in dichotomies. She deftly walks the thin line between icy virgin monarch who toys with men’s devotions and is contemptuous of the younger Mary’s charms, and the self-doubting, non-committal ruler unwittingly thrown into an authority she doesn’t want.

Twyford is especially delightful when delivering witty lines while procrastinating and offering honest asides: “She must be stunning if she can stir up the old ones,” Elizabeth quips with both sarcasm and true envy about Mary’s effect on her older subjects.

Rounding out the strong cast is Nancy Robinette as Mary’s devoted and distraught servant; Cody Nickell as the Earl of Leicester; Rajesh Bose as the callous English advisor Lord Burleigh; and Paul-Emile Cendron as the naïve Mortimer, who tries and fails to free Mary from prison.

This production revels in contradictions. While it is packed with legalese and heady arguments moving a mile a minute, its underlying emotional intensity gradually overtakes academic logic, finally exploding in a surprising upsurge of pure passion. This is perhaps most felt when the Earl of Leicester, heartlessly cunning throughout his attempt to survive the ordeal unscathed, finally breaks down in a surprising exhibit of vulnerability.

There’s no need to be a history buff to thoroughly enjoy the personal intrigue and political machinations of two legendary women whose battles resonate to this day.