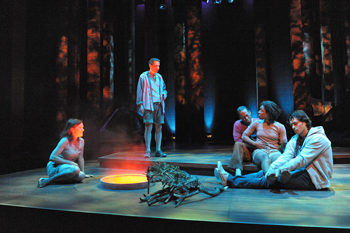 Woolly Mammoth Theatre Company’s 35th season is off to an energetic and intriguing start with “Cherokee,” Obie Award-winning playwright Lisa D’Amour’s portrayal of two suburban Texas couples who go camping in search of inner peace only to find their lives turned upside down.

Cherokee marks the second collaboration for playwright Lisa D’Amour and director John Vreeke, who teamed up on last season’s Woolly Mammoth hit “Detroit.” In “Detroit,” two couples struggled against a banal suburban existence, their lives representing the problem of the modern American condition. In “Cherokee,” two couples from Houston head for the woods of North Carolina seeking solutions to that same problem. Their vacation takes an epic turn when one member of the group mysteriously vanishes and the others are visited by a Native American local who challenges assumptions about their lives and relationships.

Vreeke’s direction in “Cherokee” is assured and brisk, and his evenly matched, talented cast make us care from the outset. Meanwhile, state-of-the art production helps a staged campsite feel as visceral and pulse-pounding as a trip to a trendy nightclub. Daniel Ettinger’s snappy sets, swathed in warm orange and amber hues, are a marvel. A locker room morphs into a campground before it transforms into a casino, and the audience barely notices the transitions. But Ettinger reaches too far outside the box, literally, with intermittent use of an overhead projection screen. He laudably aims to accentuate the action on stage, but the video images are distracting and superfluous, and the effect falls flat.

All the while, sound designer Palmer Hefferan’s auditory cues — creaking crickets, hooting owls screeching sirens — are consistently on point and greatly enhance the production. The Woolly Mammoth Theatre itself, with its stellar sound, clear sight lines and sturdy, inviting dimensions, contributes to the first-rate feel of the production. 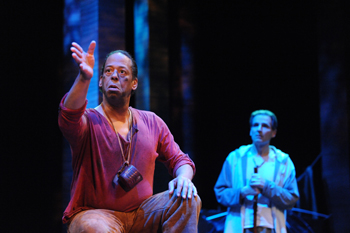 The play’s publicity materials trumpet the fact that one of Cherokee’s couples is white and the other is black, but race is scarcely an issue in this talky, meditative play. Traci and Mike, played by Erica Chamblee and Thomas W. Jones II, are the black half of the foursome, a bit less educated and affluent than their white friends, Janine and John, but also less uptight. Their displays of affection are a little corny, but believable.

Meanwhile, Janine, played by Jennifer Mendenhall, is convincing as a self-possessed, whiny and slightly ditsy soccer mom. After arriving at the camp, Janine gawks up at the pine trees and babbles about the beauty of it all, and immediately begins to question her life choices.

“How is it that our world here is so much smaller than Houston but it feels so much bigger?” Janine asks.

John, Janine’s husband, is a mid-level Houston oil executive played by Paul Morella. Morella makes John likable, but prone to neurosis, frustration and self-doubt. The couples pair well with each other, and as a foursome, they boast an easy rapport and intimate expressions of affection, sympathy and even irritation. John’s career makes for a subplot about energy policy that is a bit diverting but may be appreciated by a policy-centric Washington audience. 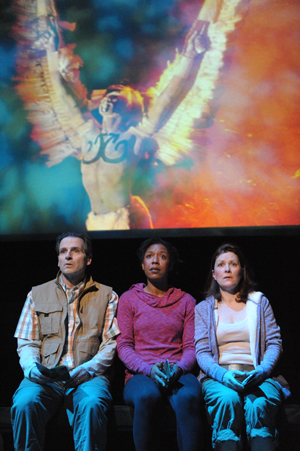 While the two middle-age couples are well-cast and effective in their roles, Jason Grasl shines as John, a Native American (of sorts) who encounters the group after one of them goes missing. Grasl’s easy way with a line belies the discipline and study he obviously brings to the role. Grasl switches back and forth between accents convincingly and propels the plot as he challenges these suburbanites’ view of the world.

Their conversations about the meaning of modern life and these people’s places in it always seem genuine, and at times even veer toward the profound. They project the self-doubts we all have.

“Sometimes I say things and I don’t even know if I believe what is coming out of my mouth,” Janine exclaims at one point.

“I do too — and no one is listening,” Traci replies, sadly.

The play’s second act veers toward the outlandish and the audience is asked to suspend disbelief (what is the likelihood that the camping crew would remain in the woods for days after one of them goes missing?) — but somehow it works.

“Cherokee” is at times absurd, but that’s the point. Sometimes our lives and priorities are absurd, as are the lengths to which we’ll consider going to escape a mundane existence. The play doesn’t offer easy answers, but it raises some important questions and validates the notion that sometimes we need to temporarily lose ourselves to find what really matters.