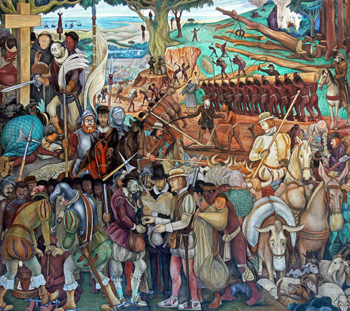 The Mexican Cultural Institute has a lot to celebrate and is exploding with artistic events — and talent — to commemorate its 25th anniversary.

For many, Mexican art is commonly associated with muralists like Diego Rivera such as this mural depicting the exploitation of Mexico by Spanish conquistadors.

“Many people have a certain image of Mexican culture that can be limited,” a spokesman from the institute, which opened its doors in 1990, explained to The Washington Diplomat. “With these wide variety of events, including public art, photography, music, film and culinary presentations, we’re highlighting the strong cultural and artistic diversity of Mexico.”

He added: “We’re also highlighting a bilateral artistic dialogue between Mexico and the United States by collaborating with other institutions like the Kennedy Center.”

One of the centerpiece anniversary events is “25 Years / 25 Artists,” an eclectic exhibit at the institute that chronicles Mexican art during the 20th century, spanning several different generations, schools and movements. The works on display include pieces produced by both Mexican-born artists and those who came to Mexico to create art.

The extensive and thorough exhibition, housed in the institute’s historic building on 16th Street, is divided into four galleries: the Mexican School of Painting; the Ruptura and Other Expressions; Artistic Vanguards; and Artists that the World Gave to Mexico.

Many people associate Mexican art with the muralist movement, considered one of the most enduring legacies of the post-Mexican Revolution landscape. With its themes of folk art and cultural nationalism, muralist painters such as Diego Rivera and José Clemente Orozco responded to the Revolution of 1910 and promoted their political views through murals that evoked traditions dating back to the pre-Hispanic Olmec civilization.

One of the featured artists in the first gallery is José Chávez Morado, who established himself in the 1930s, experimented with various materials and was one of the first Mexican artists to use Italian mosaic in monumental works. He was considered a realist, a folk art engraver and a defender of the social principles of the Mexican Revolution, one of the greatest upheavals of the 20th century. 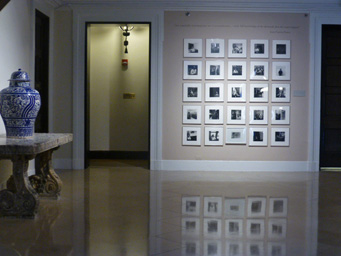 The Mexican Cultural Institute is exploring the breadth of Mexican art in a new exhibit, “25 Years / 25 Artists.”

“Morado was the last relevant muralist,” said the institute spokesman. “The murals — mostly large scenes of daily life — came out of the revolution and made people identify with what was going on in the country at the time,” he said. “It was a time for the country to get back to its roots and recognize the indigenous elements of their culture.”

Also in this gallery are works by Luis Nishizawa, one of the foremost Mexican landscape painters whose goal was to “recreate characters that have contributed to raising the human spirit and justice in mankind,” he once stated.

The exhibit also examines the Ruptura movement, named because it moved away (or ruptured) from the strongly nationalist movement of the muralists and strived for openness with the international currents of art during the 1950s, which focused more on abstraction, expressionism and cubism.

“This new trend proposed the idea of ‘art for art’s sake’ and characterized art as an expression of the individual and not as being in service of a particular social cause,” said an institute press release.

Prominent in this artistic phase was José Luis Cuevas, who published “The Cactus Curtain,” in which he rejected the idea of educating people through art that carried political and social messages. Another featured icon is Arturo Rivera, considered the greatest artist of his generation — whose visually arresting, at times shocking, contemporary paintings stunned audiences with their dark, macabre imagery. 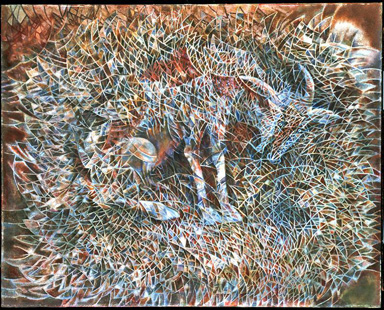 Mexican art also encompassed movements such as the Ruptura generation and works like “Chivo (Goat).”

The third gallery demonstrates how Mexican art evolved as a result of the Ruptura movement and incorporated the age of information technology. Here, artists experimented with artisanal techniques and modern instruments, with a shift toward the figurative, while still leaning on older techniques like abstraction and the use of geometric shapes.

For example, Feliciano Béjar used recycled materials as a creative catalyst, which led to his famous “Magiscope” sculptures made of reclaimed steel parts and a cut crystal “lens.”

The show wraps up with artists from other countries who eventually made Mexico their home — among them, Leonora Carrington, a British-born surrealist painter and writer. Carrington escaped the rigid demands of her wealthy English upbringing by running away to Paris with her lover Max Ernst and later fled Europe after World War II for Mexico, where her career, and fantastical imagination, took off.

The country served as a launching pad for numerous artists, as seen in “25 Years / 25 Artists.” This engine of artistic growth is also on view in a related exhibit at the Ronald Reagan Building and International Trade Center, where an innovative sculpture series by Gilberto Aceves Navarro, titled “Las Bicicletas,” is on display. As a tribute to Aceves’s 83rd birthday, 83 sculptures of multicolored bicycles (in black, white, red and orange — colors that were used by the Mayan culture to symbolize the four cardinal points) will be exhibited with the artist’s intention to show that bicycles are vehicles of health and happiness.