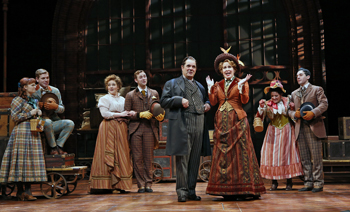 Get out your old trombones and batons and don’t let the Ford’s Theatre production of “Hello, Dolly!” pass you by. This high-stepping crowd-pleaser — a co-production by Ford’s Theatre Society and Signature Theatre — does justice to the beloved Tony-winning musical.

To be clear, those married to the colossal Broadway version with Carol Channing or to the movie mega-hit with Barbra Streisand might be disappointed, for this production is somewhat sleepy and intimate in comparison. The cast is 16 instead of the original 45, dance numbers have shrunk to fit Ford’s intimate stage, and the characters’ personalities don’t come close to Channing or Streisand’s over-the-top command of the stage. But there’s a pleasant trade-off. In this production, the audience gets a rare glimpse at an emotionally exposed Dolly, a quieter and more nuanced woman, perhaps in keeping with the original 1955 Dolly in Thornton Wilder’s play “The Matchmaker,” from which “Hello, Dolly!” sprung in 1964.

In turn, we get to experience the deeper message behind this musical sensation. Amid the fanfare of toe-tapping, swelling music, elaborate period costumes and corny jokes is the crux of the play — the vulnerability of a lonely aging woman who doesn’t want life to slip through her fingers without a fight.

That woman, of course, is Dolly Gallagher Levi, a matchmaker who’s hired by the cantankerous half-a-millionaire Horace Vandergelder to find him a wife. Instead, she hatches a scheme to woo and wed him herself, while also aiming her Cupid’s arrow on a few other bystanders.

Nancy Opel, as Dolly, is clearly a Broadway veteran whose diction is understated yet crystal clear, whose movements are definitive and bursting with confidence, and whose comedic timing and charm more than make up for what she may lack in vocal chops. In fact, it’s more fitting that Dolly doesn’t have a supreme singing voice. She is more of a has-been than a prima donna, more cunning than elegant — character traits that make her more believable and empathic. Besides, Jerry Herman’s catchy and timeless tunes don’t need a powerhouse to pull them off or to make sure you’ll hum them for weeks.

There is no question that Opel, in her Ford’s Theatre debut, carries this production directed by Signature’s Eric Schaeffer. She is completely captivating when she gazes into the audience and explains to her late husband Ephraim that she doesn’t want to be like the old, cracked leaf that’s fallen out of her Bible, years after she placed it there the day he proposed to her. When she follows with a sensitive rendition of “Don’t Let the Parade Pass Me By,” one would have to be made of stone not to get misty-eyed and drink the sentimental Kool-Aid of this worthy revival. 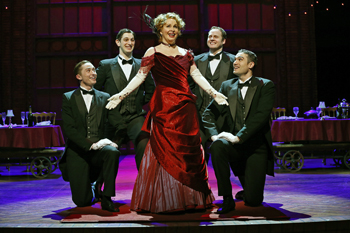 Despite Opel’s appeal as a quirky, impish, endearing Dolly, the show does lack gusto in parts. For example, only four men flank Dolly during the signature “Hello, Dolly” number, and although acrobatic, tap-dancing waiters grace the stage in the Harmonia Gardens restaurant scene, it isn’t as effervescent and infectious as in other productions. The show doesn’t really pick up the expected momentum until “Dancing,” a romantic, pleasing melody during which Dolly teaches the budding couples how to waltz. Here is where the movement and emotions start to freely flow and lubricate the gears for a rousing and more fluid Act II.

Opel shines and is clearly in her element, but the rest of the cast could benefit from some of her pizzazz. Although Tracy Lynn Olivera, who plays Irene Molloy, is an exquisite soprano and gives a beautiful rendition of “Ribbons Down my Back,” her acting falls a bit flat. Her love interest, the endearing Cornelius Hackl, played by Gregory Maheu, disappoints in “It Only Takes a Moment,” an especially glaring faux pas because the song leads into the play’s climax.

D.C. staple Edward Gero, who excelled in his stint as Sweeney Todd at the Signature in 2010, here, as Horace Vandergelder, has sufficient comedic facial expressions but lacks the needed edge for the audience to fall for the usually lovable curmudgeon.

Adam Koch’s set design is sufficiently simplistic, depicting 1890s New York with the notion that less is more. He fills Vandergelder’s hay and feed shop, the New York train station and Molloy’s hat shop with the expected packing boxes, wagon wheels and old-timey cash registers, but adds little flair, save for a string of Christmas lights and red carpet in the Harmonia Gardens.

Wade Laboissonniere ventures a little more out of the box with the costumes, creating thickly draped period dresses and garishly feathered hats for the women and plaids suit for the men. His boldest move is when Dolly unexpectedly emerges for her date with Horace in a daring, scarlet red silk evening gown.

Despite its flaws, this version of one of the most loved musicals of all times — staged at the historic Ford’s Theatre, one of D.C.’s great legacies of living history — reminds us again of the play’s universal and timeless theme that you only live once and should enjoy it while you can. If that includes buying a ticket to this production, so be it.