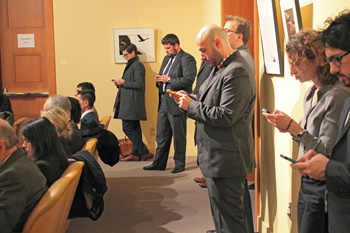 Are social media platforms an essential way for governments to engage their citizens, or are they merely a high-tech propaganda tool? Are thousands of people rioting in the streets of a foreign nation — brought together under the umbrella of social media — practicing citizen diplomacy? And has the art of statecraft truly undergone a digital revolution, or does it simply have a different microphone?

In “Digital Diplomacy: Conversations on Innovation in Foreign Policy,” Andreas Sandre poses these questions to journalists, diplomats, public policy wonks and anyone trying to navigate the intersection of technology and international affairs. Sandre, press and public affairs officer at the Embassy of Italy, is also the author of “Twitter for Diplomats” and an active member of the Digital Diplomacy Coalition, a volunteer-based group that brings together the international and tech communities.

Spanning 16 chapters, each a “conversation” on different aspects of digital trends, Sandre’s book touches on pivotal moments in the social media revolution, including the live-tweeting of the capture of Osama bin Laden and the 140-character exchange between Twitter co-founder Jack Dorsey and Iranian President Hassan Rouhani on Iran’s barriers to internet access.

Despite its title, the book is more of a communications primer than a diplomatic treatise — a crash course on why tools such as Twitter and Facebook matter, their challenges, how to craft campaigns and measure their impact, guided by the loose framework of statecraft. The “conversations” are between people who already for the most part agree with one another, and as such, deprive the reader of the element of surprise.

The only exception is Carne Ross, founder and executive  director of the advisory group Independent Diplomat, who is identified as the book’s sole “skeptic.” Ross’s chapter is perhaps the most intriguing for its contrarian approach to the supposedly transformative wonders of digital diplomacy. Whereas Sandre clearly leads many of the other chapters along his own path, Ross doesn’t merely accept Sandre’s loaded questions as fact and often questions the widely accepted belief that social media is helping non-state actors upend the world of traditional diplomacy.

For example, Sandre asks Ross to explain what diplomacy is in the 21st century, to which Ross replies: “I am a bit wary of all this kind of semantic discussion of what diplomacy is. As I said before, to me it is still what it always was: government-to-government relations and negotiations about their priorities. I don’t think that practice has changed.

“You can argue that Bono talking about poverty or Burma is a form of diplomacy — I personally don’t regard that as that,” Ross continues. “I believe it’s just a different form of engagement, and calling it diplomacy is really to confuse matters. I don’t want to be snobbish and say, ‘Oh that’s not diplomacy.’ It has certainly got its own value, but that’s not diplomacy. Likewise, individuals tweeting from Tahrir Square is a very interesting, and perhaps positive, development, though it’s not diplomacy. It is a way of getting news that is more disaggregated. Certainly, what you are seeing with global communications is a more direct contact between people. Again, I don’t see that as diplomacy.”

Ross’s assertion stands out in a book that spends over 330 pages arguing just the opposite — that governments, businesses and citizens on the street engage in a new form of diplomacy each time they tweet, post, like or share.

Ross is equally skeptical about the prevailing assumption that social media is a benevolent force for good. “Twitter and Facebook can basically be considered new forms, new tools of propaganda for governments; it is not a two-way conversation between governments, nor a dialogue with their audiences. It is another form of one-way communication, propaganda, where governments say exactly the same things they used to say; instead of doing it the old way, they do it with a tweet.”

Readers seeking a comprehensive thread or logical order to the book won’t find it. Instead, the chapters are stand-alones, with each containing a nugget about a digital challenge and a brief example of how it might be overcome.

Charles Firestone, executive director of the Aspen Institute’s Communications and Society Program, said that the deafening digital noise has made it more difficult to identify the true voices of leadership, government or otherwise.

“There are so many voices out there. There’s not one single leader. It’s harder for one leader to step forward and be seen and recognized and followed. In the attention economy — if that’s what we have — the ability to get attention is a real asset, as attention is the real scarcity with the over-abundance of information.”

Firestone also said that, despite all of these new communications networks, statecraft remains essentially unchanged. “First of all, ambassadors of the future should be the ambassadors of the past, in that they have to be smart, open people who learn the country in which they are posted — all the traditional diplomatic skills needed to be successful in the job. Technology hasn’t minimized the traditional skills of a diplomat: influence, ability to persuade, attractiveness in their country.”

Likewise, Anne–Marie Slaughter, president and CEO of the New America Foundation, offered insights on the perils of hyper-connectivity and how the digital age has compressed everyone’s time. She told Sandre that there simply is not enough time nowadays to make a mistake, discover it and correct it before it goes viral. That luxury is one citizens of the non-digital age enjoyed. Now, errors ricochet around the world before they can be recalled.

“People have always made mistakes, but they weren’t visible immediately. There were ways of checking them, and they, themselves, were frankly a little more well rested and well balanced. When you look at people who are working at the White House or the top of the State Department, these people are exhausted much of the time.”

Power, of course, can be abused, whether it’s by governments censoring the internet or spying on each other. Concerns about online privacy and surveillance exploded after Edward Snowden revealed the NSA’s extensive spying programs, including those that snooped on America’s close European Union allies.

Marietje Schaake, known as the most wired member of the European Parliament, spoke about how the Snowden leaks impacted Europe. “The revelations have meant a wake-up call for those who needed that. I believe it has helped the development of a broad political coalition that seeks to strengthen EU laws to protect people’s fundamental rights, and that looks more critically at the consequences of unchecked power by either governments or companies in the context of the digital environment. Still, there has not been enough of a response to truly make sure the overreach by secret services is curbed, and that judicial and democratic oversight is in place.”

No conversation on digital diplomacy would be complete without digital darling Petrit Selimi, Kosovo’s deputy minister of foreign affairs and a regular speaker on the Washington foreign policy circuit. His conversation in the book is essentially a reprint of his regular speeches but is a worthwhile read for anyone who hasn’t heard him speak. Kosovo’s attempts to gain recognition on the global stage via its internet campaigns epitomize the power of digital diplomacy to give smaller actors an outsize voice and illustrate perhaps the truest example of this revolutionary technology in the book.

Despite Sandre’s core premise — that using the digital spectrum is an effective avenue for conveying important messages — the book overall at times feels disjointed. It’s neither a how-to guide nor a foreign affairs treatise nor a series of case studies. It is no more and no less what it claims to be, a collection of conversations, and like many interesting conversations, the opportunity to eavesdrop is worth a listen.