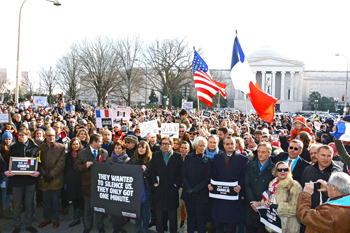 In Washington, D.C., the Islamic extremist rampage that left 17 people dead and an entire nation traumatized sparked an outpouring of emotions as well. On Jan. 11, Gérard Araud, the French ambassador to the United States, led close to 3,000 people on a silent march from the Newseum to the National Law Enforcement Officers Memorial.

Ambassador of France Gérard Araud joins envoys from Germany, Italy, Lithuania and Ukraine, along with 3,000 others, in front of the Newseum to honor those killed in the recent Paris terrorist attacks, which inspired condemnation and protests worldwide.

Many in the crowd held aloft signs reading “Je Suis Charlie (I Am Charlie),” in solidarity with the cartoonists and editors gunned down at the offices of Charlie Hebdo, the satirical French magazine that had published caricatures lampooning the Prophet Muhammad. Some also carried “Je Suis Juif” placards in memory of the four people killed by terrorists at a Jewish kosher supermarket only two days after the Charlie Hebdo attack.

“We organized this because the French community in D.C. asked the embassy to do something,” Araud told The Washington Diplomat following the event. “It was striking, when you live abroad and your country is under attack. The French people here wanted to express their sorrow and unity. A lot of French-speaking Americans were also moved by what happened.”

Upon reaching the memorial, participants paused for a moment of silence before singing “La Marseillaise,” the French national anthem. The route was highly symbolic; marchers began at the Newseum — an icon of press freedom — and ended at the memorial, where the crowd honored not only police officers and law enforcement officials who died in the three-day span of terror but also the thousands of men and women working to protect the French people from future attacks.

Two policemen — one of whose deaths was brutally captured on video — were killed when brothers Said Kouachi and Chérif Kouachi stormed Charlie Hebdo’s office in a Jan. 7 siege that left nine journalists dead, including some of France’s most prominent cartoonists. In separate but related attacks, another gunman, Amedy Coulibaly, killed a policewoman and four hostages in a kosher grocery store.

All three gunmen were eventually themselves killed in bloody shooting sprees. The attacks appear to have some links to al-Qaeda’s deadly affiliate in Yemen, and to some extent the Islamic State, though their exact connection is still being investigated.

The cold-blooded massacre shocked the world and galvanized millions to stand in solidarity with Charlie Hebdo, whose remaining staff published a defiant issue showing the Prophet crying and holding the “Je Suis Charlie” placard. The edition was a hit — some 5 million copies were snatched up — but Muslims around the world, many of whom view depictions of Muhammad as offensive, criticized the cover for needlessly stoking tensions.

The debate over religious fanaticism versus free speech has gripped France, a nation that prides itself on secularism and democracy, and laid bare the West’s fears about the Islamic radicalization of its own citizens. At the same time, Muslims fear the backlash will worsen the Islamophobia that already pervades much of Europe. 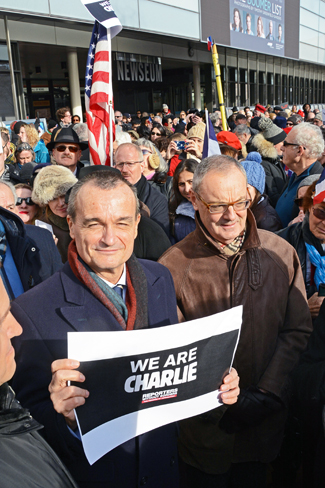 Ambassador of France Gérard Araud holds a “We Are Charlie” sign as he leads a silent march in D.C. to commemorate the Islamist terrorist attacks in Paris that killed 17 people, including journalists at Charlie Hebdo, a satirical French magazine that had lampooned the Prophet Muhammad.

Stepping into this tempest is Gérard Araud, 61, one of France’s most respected and outspoken diplomats. Araud came here from New York, where he was Paris’s envoy to the United Nations. He bucked conventional diplomacy with his freewheeling, no-holds-barred style on Twitter and has earned plaudits from the likes of U.S. Ambassador to the U.N. Samantha Power, who called him a “diplomatic and bureaucratic samurai, and one of the most authentic and authentically decent people to ever practice diplomacy,” in a November Vogue magazine piece.

In that story, Araud talked about how he didn’t want to be defined as the only openly gay ambassador in Washington (his partner lives in New York). That shouldn’t be a problem — he’s earned far more coverage for his blunt talk on everything from Syria to France’s policy in the Western Sahara than for his personal life.

All eyes were already on Araud as he switched roles with François Delattre, the previous ambassador in Washington who took Araud’s position in New York. But now, barely on the job for four months, Araud’s gift for communication is being tested like never before. A steady stream of politicians and well-wishers has flocked to the embassy to pay their respects. The Washington Post’s Roxanne Roberts reported how Araud has been swamped with what he calls “incredible outpourings of solidarity, grief and friendship coming from the Americans, and I had to receive and answer these messages.”

“This is one of the biggest shocks I have ever received — not only as a diplomat, but also as a French citizen,” Araud told us. “For my country, this is a bit like our own 9/11. I am moved and disturbed like any French citizen. And the fact that Jews are targeted by terrorists is for me personally devastating.”

A Mideast expert, one of Araud’s previous assignments was Tel Aviv, where he served as ambassador to Israel. Two days after the silent march in D.C., Araud spoke at Washington’s Adas Israel synagogue, at an event organized by the American Jewish Committee.

“As you know, I lived six years of my life in Israel, and I share the feelings expressed by our prime minister [Manuel Valls] that without the Jews, France wouldn’t be France. It would be totally normal and acceptable for the Jews to go to Israel if it’s their free choice, but if they’re obliged to do it because they’re afraid to live in France, that’s abominable.”

France has between 500,000 and 600,000 Jews — the largest Jewish population in Europe — but last year, about 7,000 of them, or more than 1 percent of the community, moved to Israel. Others left for the United States, Canada and Great Britain. Even more are expected to emigrate this year, in the wake of the most recent attacks and increasing anti-Semitism.

Even so, Araud cautioned against allowing the Charlie Hebdo and kosher supermarket attacks to be manipulated by extreme right-wing parties to persecute Muslims (who make up nearly 8 percent of France’s population) or push for France to close its borders.

“As you know, all over Europe there are anti-immigrant feelings, and most of the immigrants are Muslims,” he warned. “There have already been incidents against mosques, and anti-Muslim demonstrations in Germany. We have to integrate them better, because obviously there is a social problem. Things are going to change because we are obliged to wage a war against radical Islam.”

Araud added: “One of our priorities is to convince French public opinion that we can ensure their security, safety and prosperity in the framework of the European Union. But this means the borders of the EU also have to be more protected. We want to be able to say to our people, ‘Europe is also protecting you.’”