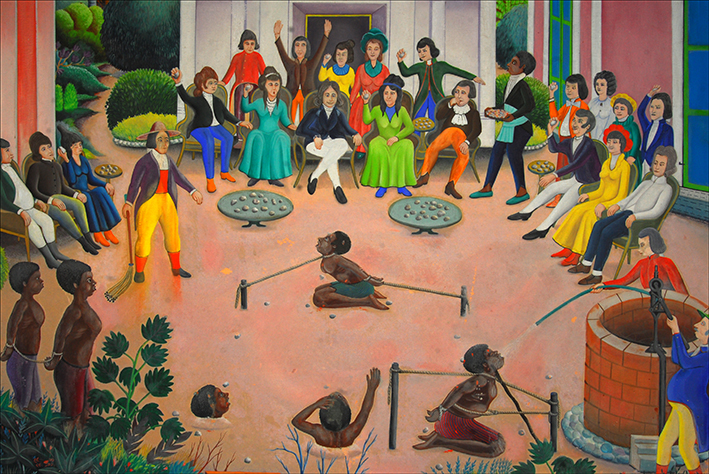 “Haiti appears to be cursed,” wrote Le Monde, in an editorial two days after President Jovenel Moïse was assassinated. “It is a failed state,” added the august Parisian daily. This does not surprise me. Haiti attracts world attention only at times of major catastrophes, such as the earthquake that on Jan. 12, 2010, destroyed 80% of the capital, Port-au-Prince, and some communities as far as 35 miles away.

At that time, no less a figure than the Protestant Evangelical minister Reverend Pat Robertson said the catastrophe was God’s “punishment” of Haitians for “the pact that was signed with the devil to get their independence.” Apparently he was referring to the voodoo ceremony that launched our independence struggle. Never mind that the Scriptures say God visits transgressions of parents to only the third and fourth generations. And that our cause was just.

More than two centuries after our epic victory over the French army of Napoleon by the ragtag army of former slaves, Haiti is still seeking to redeem its heroic gamble. The first black republic to declare independence—on Jan. 1, 1804—Haiti was the second independent nation in the Western Hemisphere, after only the United States. Yet Haiti had to wait until President Lincoln for recognition from Washington.

Historians have yet to fully address the plot to wreck Haiti that began soon after independence. The world powers of the day declared an embargo of the new nation, in effect cutting it from international trade. In 1806, at the request of Napoleon’s foreign affairs minister, Charles-Maurice Périgord, the United States went further by declaring a blockade of Haiti. Périgord’s letter to his envoy in Washington records the perfidy.

“The federal government should adopt severe measures to prevent all sorts of communication between a civilized nation and savage people who, through their ferocious manners, barbarians no less, are strange to the system of civilization,” Périgord penned. Moreover, he wrote, “they don’t threaten France’s security only, but also the security of all the European colonies and those of the United States.”

And this: “The existence of armed negro people, soiling the places they occupy by their most criminal acts, are a horrible spectacle for white nations.” The campaign escalated in 1825, when, on orders of the French king, Charles X, an armada moored in Port-au-Prince harbor ready to reduce the Haitian capital into ashes if President Jean-Pierre Boyer refused to sign that Haiti owed France 150 million francs, equivalent to about $21 billion in today’s dollars.

That debt was for property loss, including slaves. It was eventually bought by a forerunner of Citibank. That was when the Americans invaded Haiti in 1915. The debt was finally paid in 1947. Thus was Haiti’s economy mortgaged from the beginning of its existence as a nation. The Americans invaded after the assassination of President Sam, who was dragged from the French Embassy, where he sought refuge after he ordered a massacre of political prisoners.

Sam met a worse fate than Jovenel Moïse. His body was chopped to pieces and paraded through the capital. The US occupation lasted 19 years and, generally, US troops humiliated the Haitians. Most of those soldiers came from southern states, where Negroes were kept in what southerners deemed “their place.” America’s role in Haiti was not a pretty picture, even including relatively recent events.

In 1994, President Clinton dispatched 20,000 soldiers to Haiti to return to power its democratically elected president, Jean Bertrand Aristide, who had been toppled in a coup,  fled to Venezuela and eventually landed in Washington. Aristide finally got Washington to back his return. As dividends to the United States, Arkansas rice farmers gained the Haitian market, in the process destroying local rice production.

I contend that Haiti’s underdevelopment is due, in the first place, to France and other European powers, in accord with the United States. They were determined to make an example of the country, especially, at least in the early years, to deter copy-cat revolts by those who were enslaved in this hemisphere and elsewhere in the world, including in Africa. They succeeded, making Haiti the pariah state it is today.

Not that this tragedy is without Haitian accomplices, traitors who embraced corruption for personal gain. Haitian leaders of this ilk included François “Papa Doc” Duvalier and Jean-Claude “Baby Doc” Duvalier, who passed themselves as anti-communists and precipitated a brain drain of Haiti during a dictatorship that lasted 29 years. That, too, contributed to the situation in which Haiti finds itself today.

Yet the Haitian revolution allowed the United States to double its sovereign territory. That happened in 1803, when France sold the Louisiana Territory to the United States for the equivalent of $15 million. Compare that with what the French imposed on Haiti as reparations for property lost. The French capital in the New World was in Cap-Français, now Cap-Haitïen. The French went so far as get the Americans to backdate to April 30 the Louisiana Purchase to avoid giving credit to the slave revolt.

Despite all attempts to bottle up the Haitian revolution, it caught the attention of Simón Bolívar. It was from Haiti that, in April 1816, Bolívar launched his expedition of liberation, with men, weapons and money provided by Haiti’s president at the time, Alexandre Pétion. When Bolívar proposed to recognize that the liberation of Venezuela was owed to Haiti, Pétion is reported to have said, “No. But wherever you succeed, free the slaves.”

The bonds between Venezuela and Haiti were historic and strong for many years thereafter—until 2019, when Moïse turned his back on Nicolás Maduro and embraced President Trump’s efforts to isolate the Venezuelan tyrant. Maduro, for his part, has flaunted democratic principles and aligned himself with Cuba, China, Russia and even Iran. And then, things took another tragic turn.

On June 2, Moïse received the credentials of the first Russian diplomat in Haiti, Sergey Melik-Bogdasarov. On June 17, Moïse, accompanied by his wife Martine and a large delegation, went to a two-day conference in Turkey. This tipped his ideological preference and led the European Union to distance itself from his anti-democratic measures. That included a referendum to give himself more power—and absolve him and his close associates from wrongs committed while in office.

So here we are at a juncture, in a drama of more than 200 years that Shakespeare himself couldn’t have thought up. It’s a juncture where Haiti yet again faces an uncertain future, with power-hungry individuals fighting over who will legitimately assume leadership. At this moment, Haiti craves something better than what history has dealt us.

Now is the moment for civil society, politicians and religious organizations of all stripes to organize an inclusive conference that will chart the path for an interim government to prepare the ground for democratic elections. Before that, Haiti will need a plan to deal with the heavily armed gangs that have imposed their rule throughout the country, including in the capital. The government’s sovereignty must be restored.

Only then can attention turn to a public works program and a renewal of agriculture, and a program of decentralization to make the country “The Republic of Haiti” instead of “The Republic of Port-au-Prince.” French reparations for the billions it forced Haiti to pay over 122 years would go a long way in lifting the curse and stopping our plunge into a “failed state.” And only then, hopefully, can Haiti reclaim its old moniker of “Pearl of the Antilles.”

Raymond Joseph, Haiti’s former ambassador to the United States, is a contributing editor of The New York Sun, where this article first appeared.