Home The Washington Diplomat March 2020 Op-Ed: Palestinians Should Present Counteroffer to Trump’s ‘Deal of the Century’ 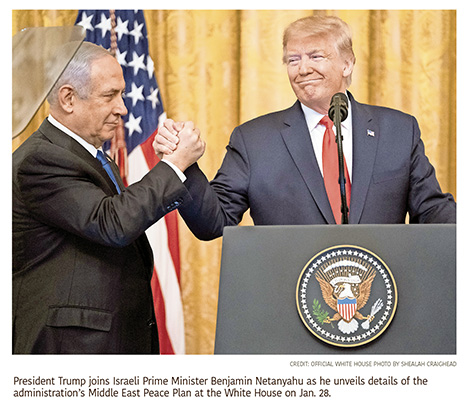 They say diplomacy is the ability to tell someone to go to hell in a way that they look forward to the trip. That’s exactly how the Palestinians should respond to President Trump’s Middle East peace plan, bucking the mainstream consensus that the “deal of the century” is dead on arrival.

There are so many elements of Trump’s proposed peace plan that are not only objectionable to the Palestinians but outrageous. They range from:

Instead of being continuously outraged and incensed, however, Palestinians are better served by presenting a counterproposal of what would be an acceptable offer to them.

The Palestinian counterproposal could include the following components:

These are the highlights of what a Palestinian counteroffer could in theory look like. Many points — in particular, only making modest adjustments to pre-1967 borders to ensure a contiguous Palestinian state, with East Jerusalem as its capital — have been reiterated in past peace proposals supported by the international community and the U.S.

Consequences of Palestinian Refusal to Present a Counteroffer

Trump has said his plan is a “historic opportunity” for the Palestinians to achieve an independent state and that after 70 years of little progress, “this could be the last opportunity they will ever have.”

Meanwhile, Jared Kushner, Trump’s son-in-law and the main architect of the plan, urged the Palestinian leadership to “stop posturing” and come to the table, telling CNN that, “It’s a big opportunity for the Palestinians, and they have a perfect track record of blowing every opportunity they’ve had in their past.”

As widely predicted, Palestinian Authority President Mahmoud Abbas immediately rejected Trump’s peace plan, dismissing it as the “slap of the century.” Some observers speculate the plan was designed to be so tilted in favor of Israel that the Palestinians had little choice but to reject it, allowing the Trump administration to blame them for walking away.

That is exactly why the Palestinians should present a counteroffer or proposal of their own. The consequences of not doing so could be profound.

Currently Israel is in full physical control of all of historic Palestine. Abbas cannot go from Ramallah to Bethlehem without “coordinating” his travels with the Israelis. Essentially, Israel exercises unfettered control from the river (Jordan) to the sea (Mediterranean).

If the Palestinians do not present a counteroffer, it will be construed as “the thousand no’s” that characterized Abbas’s initial response to Trump’s peace plan. That is all the pretext Israel needs to annex whatever settlements they want in the West Bank. They can proceed with their plan to annex the Jordan Valley as well.

Israel already annexed East Jerusalem. What were the Palestinians able to do to stop them?  Nothing.

If Israel proceeds with these new annexations, it can create facts on the ground that might, over time, become irreversible. Is the current Palestinian leadership willing to take that chance?

Moreover, as long as Trump is president, Israel is protected from any adverse U.N. Security Council resolutions, even those that have had U.S. support under previous administrations. Already, Abbas’s attempt to push a Palestinian resolution at the United Nations condemning Trump’s peace plan has been watered down and postponed — a victory for the administration’s efforts to scuttle the resolution. (Abbas has said he is willing to negotiate with Israel directly but not with the U.S. as the sole mediator and not based on Trump’s peace plan.)

The Palestinians can emphatically reject Trump’s initiative but the smart thing to do is to offer an alternative so that it is viewed by allies as a constructive move toward a resolution of the conflict. Presumably, such a counteroffer will force Israel not to implement its threats to annex the Jordan Valley and Israeli settlements in the West Bank because the United States has invited the Palestinians to present a counteroffer (and signaled that it’s open to making changes to the plan if Palestinians come to the table).

From a Machiavellian perspective, the success of Trump’s peace proposal hinges on the Palestinians’ refusal to accept that proposal but, more importantly, their refusal to submit a counterproposal. Imagine what would happen to Israel’s political landscape if the Palestinians submit a counterproposal that would force Israel to sit down and negotiate over the new terms.  Israeli infighting could easily scuttle any prospects for Prime Minister Benjamin Netanyahu to form an annexationist right-wing government.

Israel would come under immense pressure not only from the Europeans, Russia and the U.N., but also from the United States to avoid taking any action before considering the Palestinian counteroffer. This could potentially lead to serious negotiations that would break the decades-long impasse, which is ostensibly the Trump administration’s goal.

In his deep desire to go down in history as a peacemaker, and possibly win a Nobel Peace Prize, Trump might be forced to lean heavily on the Israelis to compromise to make a peace agreement work. That would clearly be in the Palestinians’ favor.

If the Israelis refused, the world, including quite possibly the United States, would point the finger at them for their intransigence. And the United States will be put in a position not to support Israel’s annexation of any settlements, let alone the Jordan Valley.

Bishara A. Bahbah was editor-in-chief of Al-Fajr, a Jerusalem-based Palestinian newspaper, and served as a member of the Palestinian delegation to multilateral peace talks. In addition, he was a professor at Bethlehem and Al-Quds Universities, and he taught at Harvard University, where he was the associate director of its Middle East Initiative.