Home The Washington Diplomat March 2020 French, German Ambassadors Reflect on What Europe’s Future Will Look Like 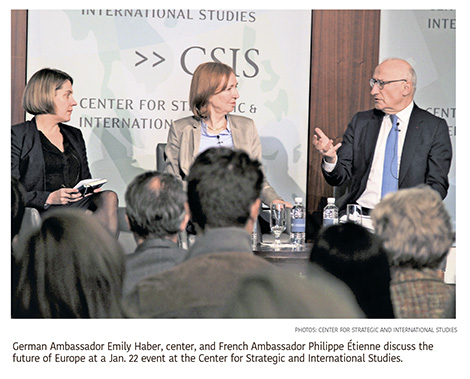 On Jan. 22, as members of the European Commission in Brussels laid out plans for a two-year “Conference on the Future of Europe,” in Washington, D.C., ambassadors from the EU’s largest and arguably most influential countries, Germany and France, met to discuss what that future might look like.

Hosted by the Center for Strategic and International Studies, German Ambassador Emily Haber and French Ambassador Philippe Étienne offered their thoughts on the challenges and opportunities before European nations in 2020 and beyond.

“Europe has always been at a crossroads,” Haber said, but its “mission statement” is different today than what it might have been just a few years ago. “The balance of the world has changed, and not in favor of the West,” she conceded. “We need all our collective strength to defend that balance and our values.”

Haber suggested that the various crises of recent years, including the large numbers of migrants flooding into Europe, Britain’s departure from the EU and the rise of extremist political ideologies, have led to “much introspection” among member states. However, she insisted that Europe was not on any kind of downhill slope toward “skepticism and fragmentation.” Rather, she asserted that “[a]ll the polls will show you that the European cause [i.e. the EU] has become more popular, and that the public engage with it more than they used to.”

Acknowledging that “there is much homework to do,” Haber said that going forward, Europe needed to become “more resilient” about issues such as economic rights, digital technology, climate change, the rise of China and the rights of young people.

Étienne agreed that while Europe faces a litany challenges, when stepping back to look at the bigger picture, it’s clear there also much to celebrate.

“We have succeeded in having a European currency. We have started an economic and monetary union. We have succeeded in the reunification of Germany inside the EU, and then to extend the EU to countries which suffered from Soviet domination,” he said. “These are incredible successes…. But we still have this test. We are in this new world with a number of global challenges which we have to give answers to.”

Étienne noted that many of these challenges come from outside Europe, such as the movement of migrants from North Africa and the Middle East. Others are global in nature, including the difficulties of transitioning from fossil fuels to clean energy and establishing protocols for safety and security in today’s digital revolution.

Of special importance to both Haber and Étienne was the bilateral relationship across the Rhine. Both cited the recent Treaty of Aachen between France and Germany as a sign of their countries’ deepening partnership. First proposed by French President Emmanuel Macron — who has bucked the populist uprising in France and across Europe by advocating for a stronger EU — the treaty aims to bring France and Germany closer together on matters such as culture, education, climate, security and defense.

For Étienne — who before coming to Washington served as Macron’s diplomatic advisor — the relationship between the two countries was “personal,” having been deeply inspired by German and French citizens who, in the aftermath of the Second World War, were determined to make reconciliation between the two nations a reality. “This cooperation remains an inspiration,” and also “a necessary condition for European integration,” Étienne said. However, the ambassador cautioned that close cooperation between France and Germany “is not sufficient” in and of itself because “all states in the EU have a part in this process.”

For her part, Haber suggested that people too often look at France and Germany through a lens of differences, which is “the wrong framing.”

“It is hugely important for the rest of the EU that two large countries with different traditions, histories and vantage points try to bridge differences and argue them out, which we do,” Haber said. As an example, she said that over the past decade, “visions have been the German thing and incremental approaches probably the French thing.” That was good, she argued, because both approaches were needed to build a Europe of the future.

Both ambassadors also emphasized the continuing importance of the transatlantic relationship, which has taken a beating under President Trump.

Étienne suggested that France and Germany were “in different ways very close allies of the U.S. through our different histories.” He said both nations were deeply grateful to the United States for its support in the postwar period, as well as through the process of creating the European Union. 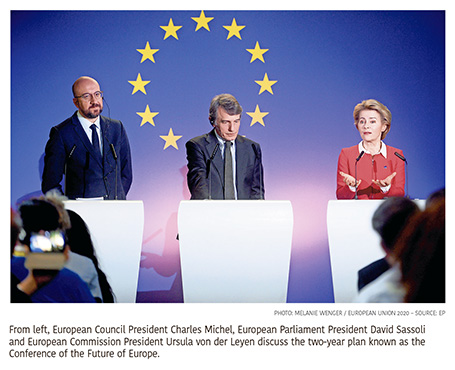 Haber emphasized that the United States was, indeed, the EU’s closest ally, “but the world is changing and the balance is changing.”

“The status quo and our interests are not being challenged in Europe. They are being challenged elsewhere,” she said in what appeared to be an oblique reference to the U.S. tariffs that Trump has slapped on European goods and his demands that European nations contribute more to NATO. “This means we will have to adapt…. It means a greater coherence in European defense,” she said. “It is in the American interest if Europe is strengthening its home base.”

Haber warned though that should the U.S. impose additional tariffs on European goods, “we will react.” She said the U.S. “should remember that the EU is not a bloc pitted against American interests. Every European nation feels aligned to your values and your interests. We see you as a strategic ally.”

The ongoing migrant crisis, Brexit and the rise of authoritarianism were at the top of both ambassadors’ concerns for the future of Europe. Haber herself was deployed as state secretary overseeing security and migration at the height of the refugee crisis in Europe. In this capacity, she worked closely with the U.S. on topics ranging from the fight against international terrorism to global cybersecurity.

She said that the migrant crisis, which exploded in 2015, had “led to much loss of confidence, but at the same time has led us to strengthen our governance systems.” However, she cited a “disconnect” between how many Europeans felt about the crisis, particularly at its height several years ago, and what their governments could reasonably do about it.

“This was hugely important. Governments said, ‘Yes, we’ll have to solve this problem because we have open borders, but we can’t just do it on our own. We have to negotiate [with other countries].’ But people said, ‘We hold you accountable.’ What I realized at the time was if you don’t make people understand that comprises [are necessary], that European governance structures, European law, is there to protect the citizens, you’ll have this legitimacy gap.”

Étienne added that while the European Commission, the EU’s executive body, had “given a clear vision” on matters such as migration, “the downside is that it’s very complicated, even for our citizens to understand, that we have this legal political framework … where compromises are built in a way which allows us to take into account national interests.”

He acknowledged that citizens don’t always see how this collective EU governance process respects national interests. “They are always asking questions about how it works, is it legitimate,” the ambassador said. “It is very important to show that we act together and that we are efficient in acting to take decisions, but also that together we look toward the future,” he added, noting that he refers to this pan-EU governance process as “constructive compromise.” 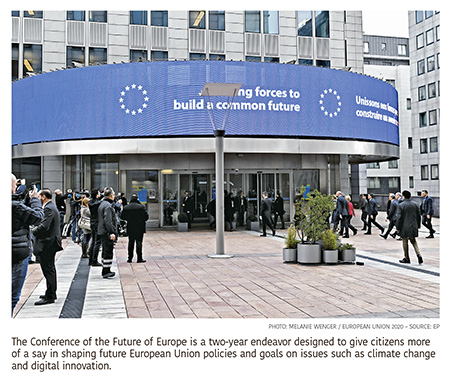 Haber and Étienne were fairly sanguine when it came to Brexit, which became official on Jan. 31. Haber said that with its departure, Britain “will take one dimension — its global experience, global outlook, its way of handling the economy,” but that Britain would remain the EU’s closest partner outside the U.S.

Nevertheless, she acknowledged that Britain’s departure would alter existing balances within the EU, the result of which is “difficult to predict today.”

Étienne, too, acknowledged the seismic change in the status quo. “To lose such an important state as the United Kingdom is a loss for everybody,” he said, but it was a decision the people of Britain had the right to make. He said that it was now up to the EU and the U.K. to negotiate an agreement on their future relationship, including trade, security, migration, academic exchanges an an array of other thorny details. He noted that Macron has long proposed maintaining strong ties between the EU and the U.K., but that depends on the negotiating positions of both sides. “We have to negotiate in a way that ensures a net benefit for all of us, both the U.K. and the EU,” he said.

The envoys agreed that the rise of authoritarianism, particularly in Central and Eastern Europe, was another mutual concern. Haber pointed out that the European Commission has made democracy and the rule of law “one of its priorities,” and that, starting in May, the commission will convene a two-year Conference on the Future of Europe to address these specific issues.

“This is a process which will distill a shared sense of narrative, of what we are, of our identity,” she said. “I think the conference will play a huge role in defining what we want to be and where we’re going to head.”

Étienne agreed but warned that in working toward refining a European identity, the EU “must absolutely avoid” creating any divisions between East and West or between older and newer member states. That was an important aspect of the EU charter itself.

“I would like to conclude,” he said, “by repeating the success of European integration, of the Franco-German treaty of Aachen one year ago, by reminding of the need of a strong European Union, but also of a strong transatlantic relationship. For the security of the United States, you need a successful EU.”