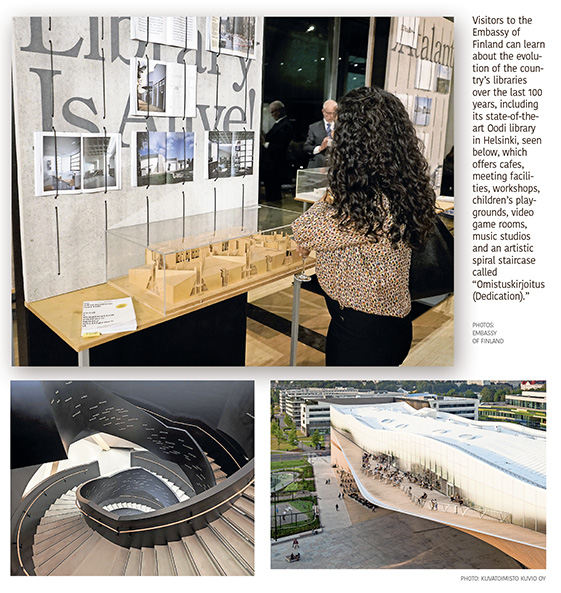 Libraries may seem like a dusty relic from a time before the advent of Wikipedia and Google, but in Finland, libraries are still considered revolutionary, serving as communal hubs of learning and egalitarianism.

Finland’s 864 public libraries are “open for everyone, free for everyone, belonging to everyone and used for everyone’s benefit,” according to Anni Vartola, curator of “Mind-Building,” an exhibition on Finnish libraries and library architecture now on display at the Embassy of Finland.

The Finns’ deep love of libraries and literacy is reflected in the fact that the Nordic nation’s 5.5 million people borrow nearly 68 million books a year.

Libraries represent the importance Finns place on democracy, education and architectural innovation. According to the exhibition, local librarians and architects of library buildings — referred to as “mind-builders” — help create a welcoming space for social inclusion, civic engagement, freedom of expression and intellectual creativity.

The exhibition was originally produced in 2018 for Venice’s Biennale Architettura, whose theme was “freespace.”

Vartola said the term freespace “rests on an understanding that the architecture of public libraries synthesizes the representation of a social institution, the functional needs of library spaces and a publicly funded architectural gesture of considerable local significance.”

Architecture, in fact, has played a key role in the development of Finland’s libraries. Originally, Finnish libraries were designed to be architecturally inviting, uplifting spaces so that working-class people would “come in, read newspapers, study books, learn about the world and, thereby, enlighten themselves and thus become active, well-informed citizens,” Vartola, who is also an architecture expert, told Laura Houseley in a May 2018 CNN article. “This basic principle still holds true.”

Today’s libraries are both visually striking and versatile — “a place for learning, doing and sharing,” according to the exhibition. So unless you’re in a silent section, there won’t be much shushing going around because libraries in Finland double as hubs of social activity, which is especially important in a country known for cold, dark weather.

Indeed, these creative spaces not only house books, they also offer cafes, meeting facilities, classes, children’s playgrounds, video game rooms, music studios and workshops where patrons can use everything from 3D printers to sewing machines (one library even has karaoke).

This emphasis on community engagement is seen throughout “Mind-Building,” which takes visitors on a journey through time, beginning with the opening of the Rikhardinkatu Library in Helsinki in 1881 and ending with the 2018 grand opening of the Oodi Helsinki Central Library. Along the way, we see both the distinct characteristics of each library on display and the commonalities they share.

For example, the Metso library, built in 1986 in the city of Tampere, stands as a testament to Finnish architecture, particularly its emphasis on minimalism, openness and sustainability. The library’s brightly lit, sleek curved lines resemble the shell of a snail, while the color of the interior textiles is based on wild flowers and bird plumage, evoking the Finns’ love of nature and their pioneering use of clean, contemporary design.

While each of the libraries has its own appeal, Oodi is in a league of its own as an example of what the future of libraries could look like.

Finland’s newest state-of-the-art library, built in the heart of Helsinki, is displayed with the words “Your Next Living Room,” an apt description for this multipurpose refuge where you can enjoy lunch, hang out with friends, see a movie, host events, embroider curtains or escape in the world of virtual reality.

According to ALA Architects, which built Oodi, the library reaches “beyond the character of an ordinary library” and embodies “a new concept of an indoor public space full of opportunities. As such, it is a bold and concrete token of the fundamental values of the Finnish culture and society.”

Those values include diversity and equality, as seen in the library’s spiral staircase titled “Omistuskirjoitus (Dedication),” which is punctuated with words such as “strangers,” “beggars,” “the lonely,” “urbanites,” “populists,” “skeptics,” “genderqueers,” “grandfathers,” “minorities,” “wizards,” “bureaucrats,” “bellyachers” and dozens of other colorful descriptions — even “the illiterate” — so that anyone and everyone knows they have a place in the library.

The 2018 opening of the Oodi Library was part of the celebration marking the centennial of Finland’s independence. After Finland declared its independence in 1917 following the abdication of Russia’s last czar, the fledging state descended into a brief civil war that killed nearly 40,000 followed by a long stretch of economic destitution and division.

But the government invested heavily into areas such as education — including libraries — and Finland rapidly developed into one of the world’s most prosperous states, consistently ranking at the top of indicators for quality of life and, not surprisingly, education.

Today, Finland boasts one of the highest literacy rates in the world. Its emphasis on the value of education is a driving force behind providing university access at minimal costs and also free public libraries. For Finns, the power of education and literacy makes their yearly 58 euro contribution to public libraries a worthwhile investment.

Finns also feel personally connected to their libraries because architects ask locals what they want or need out of their libraries, incorporating these ideas into their plans (hence, the karaoke).

This appreciation is seen at the Finnish Embassy in a section that displays postcards from libraries in towns with populations as small as 1,000 and as big as several hundred thousand.

Vartola told us that “this collection of postcards tells about the affection between the library building and the local community that uses it and sees it as an integral part of their environmental identity.