Home The Washington Diplomat February 2020 Over 60 Embassies, 5,000 Visitors on Hand for Eighth Edition of Winternational 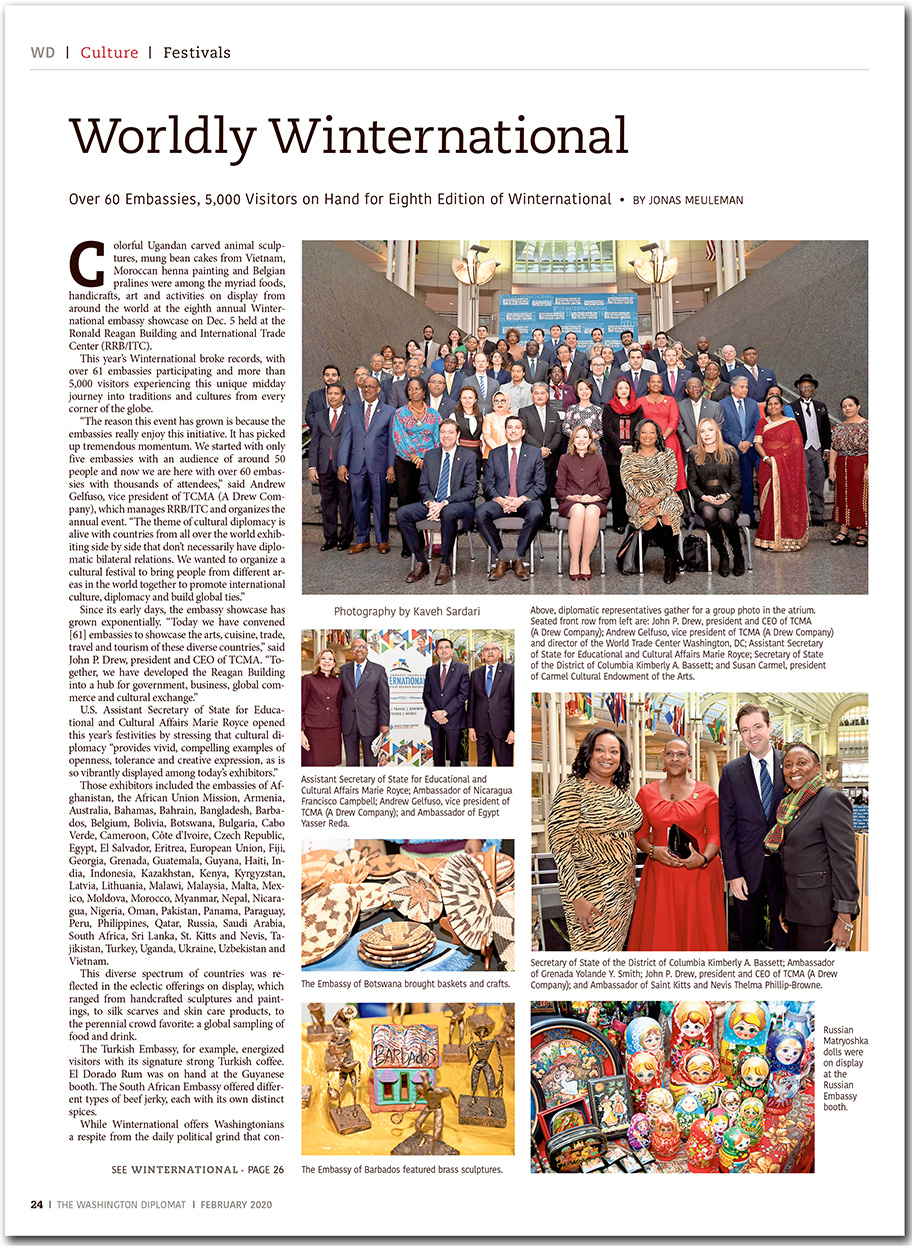 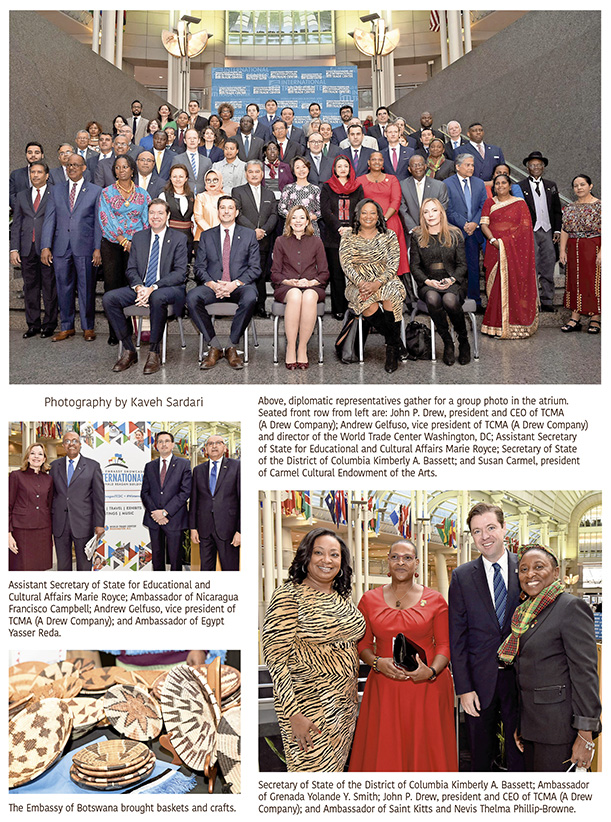 Colorful Ugandan carved animal sculptures, mung bean cakes from Vietnam, Moroccan henna painting and Belgian pralines were among the myriad foods, handicrafts, art and activities on display from around the world at the eighth annual Winternational embassy showcase on Dec. 5 held at the Ronald Reagan Building and International Trade Center (RRB/ITC).

This year’s Winternational broke records, with over 61 embassies participating and more than 5,000 visitors experiencing this unique midday journey into traditions and cultures from every corner of the globe.

“The reason this event has grown is because the embassies really enjoy this initiative. It has picked up tremendous momentum. We started with only five embassies with an audience of around 50 people and now we are here with over 60 embassies with thousands of attendees,” said Andrew Gelfuso, vice president of TCMA (A Drew Company), which manages RRB/ITC and organizes the annual event. “The theme of cultural diplomacy is alive with countries from all over the world exhibiting side by side that don’t necessarily have diplomatic bilateral relations. We wanted to organize a cultural festival to bring people from different areas in the world together to promote international culture, diplomacy and build global ties.”

Since its early days, the embassy showcase has grown exponentially. “Today we have convened [61] embassies to showcase the arts, cuisine, trade, travel and tourism of these diverse countries,” said John P. Drew, president and CEO of TCMA. “Together, we have developed the Reagan Building into a hub for government, business, global commerce and cultural exchange.”

U.S. Assistant Secretary of State for Educational and Cultural Affairs Marie Royce opened this year’s festivities by stressing that cultural diplomacy “provides vivid, compelling examples of openness, tolerance and creative expression, as is so vibrantly displayed among today’s exhibitors.”

This diverse spectrum of countries was reflected in the eclectic offerings on display, which ranged from handcrafted sculptures and paintings, to silk scarves and skin care products, to the perennial crowd favorite: a global sampling of food and drink.

The Turkish Embassy, for example, energized visitors with its signature strong Turkish coffee. El Dorado Rum was on hand at the Guyanese booth. The South African Embassy offered different types of beef jerky, each with its own distinct spices.

While Winternational offers Washingtonians a respite from the daily political grind that consumes the capital, in a city like Washington, D.C., politics is hard to escape. The Ukrainian Embassy, for example, rejoined this year’s showcase after having to miss it last year because of tensions back home with Russia.

Taras Moskalenko, the embassy’s first secretary of cultural affairs and public diplomacy, said he was pleased to see so many people flock to his embassy’s booth to learn about his country — outside of the daily news headlines. “Apparently we became very popular all of a sudden,” he said wryly. “We gave away more brochures and sold a lot more than we thought we would.” The delegation also brought traditional Ukrainian spirits called horilka, made of grains and pepper, that no doubt contributed to the popularity.

While Ukraine has generally been a fixture at Winternational, for other embassies, it was their first time participating.

The Embassy of Grenada promoted its country with the slogan “Spices of the Caribbean,” providing visitors with samples of cinnamon sticks, nutmeg, mace, turmeric, cloves, pimento and ginger, while explaining their various culinary and medicinal uses. In addition, embassy staffers discussed the country’s efforts to become the chocolate capital of the Caribbean and one of the finest chocolate-producing countries in the world.

“I think Winternational is a good medium to sell our beautiful, pure Grenada,” counselor Rosemarie Welsh said. “It is an incredible opportunity for us as a small island nation, and we are already looking forward to participating in [other initiatives] to display our culture even more.”

Meanwhile, the Lithuanian Embassy, a third-time participant, used the occasion to both highlight its culture and celebrate the season by displaying festive ornaments alongside Baltic amber jewelry. A children’s author was also on hand to talk about her award-winning book, “The Fox on the Swing,” whose message, she said, resonates with children and adults alike and encapsulates what the day is all about.

“The book is about friendship between a boy and a fox, but its main message is about finding happiness in small things. It is now available in 11 countries and translated into each of their languages,” author Evelina Daciuté told us. “I am extremely grateful to have the ability to show it at Winternational surrounded by so many different cultures and languages because this is the perfect event to bring the stuff that is unique and national to our countries and at the same time make it universal.”

Gelfuso said the popularity of the event has led to an ever-greater diversity of offerings each year.

“We’ve got about 1,000 more attendees [than last year], and we have about 10 more embassies than we’ve ever had. But the greatest thing that’s different is that they’re all trying to outdo each other. There’s friendly competition, which motivates embassies to display more items, which then makes the public stay longer to enjoy new and exotic experiences.”

Jonas Meuleman is an editorial assistant for The Washington Diplomat.