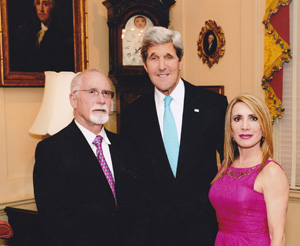 They met on the beach in Rio de Janeiro. He was an honorary consul for Barbados and she was a tourist hospitality agent in town. “I had come after work, about four o’clock, just to relax and enjoy the beach, have some quiet. I am not a sun person. He was just leaving,” she remembered. “He came up next to me and put down his towel. I thought, ‘Who is this?’ It was his way to get close. We started talking.”

From then on, John Beale rarely left the side of his future wife, Leila Mol Beale. “He came to my office, would find a table and eat his lunch, read the papers. I wondered what he was doing, if he ever worked. I thought we should give him a bill,” she joked.

Instead, he put her on notice that she was the one for him. “He was in such a hurry; he asked me right away to marry him. He got it in his head and that’s what he wanted.”

Today, John Beale is ambassador of his native Barbados and his wife Leila, a real estate agent, is by his side spreading the word about his picturesque Caribbean island. “I am still Brazilian but my job while we are here is to represent Barbados in the best way that I can. My husband has one passport, I have two and our girls have three since they were born in Arlington Hospital when John was assigned here before and we lived in Fairfax, [Va.].”

The couple also has friends in Ohio and Arizona, where the ambassador earned his bachelor’s and master’s degrees, respectfully. “Now we have friends and family in Miami, Florida, too,” Leila noted, “with several properties there.”

John Beale has 26 years of experience in the international banking and project-financing sectors, including stints with the Chase Manhattan Bank network and the International Finance Corp., the private-sector arm of the World Bank.

Leila herself has two bachelor’s degrees: one in languages, including English, and the other in the literature of Brazil, Portugal, the United States and Britain. She taught for a while and “then I went to tourism because I have so many languages.”

So which language is spoken at home?

“When I met my husband I picked up his accent from Barbados, where the English is spoken with a British accent,” Leila told us. “Of course, I speak Portuguese. I like foreign accents and mannerisms but we all speak English at home.”

Besides being a real estate agent here, she has a jewelry shop in Barbados, “one of the nicest on the island,” she said proudly. “We design custom-made pieces in 18-carat gold. In Brazil, we mine lots of gems: aquamarines, tourmalines, emeralds, topazes, diamonds, citrines, amethysts and many more.”

“You need to carve a niche for yourself and work hard. There is always someone selling and someone buying and, as an agent, you hope you’re lucky enough to get there in time.” Her card says “Hollywood Real Estate” because she works with broker James Hollywood.

Leila, in fact, brings a little Hollywood style to D.C. In a city full of suits, where both men and women tend to dress conservatively, Leila often stands out at diplomatic receptions with bright flashes of color and chic outfits that complement her svelte figure.

She works hard to stay in shape, jogging and working out seven days a week. She also enjoys dancing and has taught dancing classes: “I’ve always danced — I’m Brazilian.” Leila also plays tennis, golf and loves to swim. She even has a black belt in karate.

As far as dieting goes, “I have good eating habits but I don’t count calories. I go for quality rather than quantity,” she said. “I go the natural way, organic.”

Watching what she eats is actually a necessity because Leila has serious allergies to most fruits and vegetables, anything containing gluten, the outdoors and even their two cats, Oslo and Louro (she takes allergy shots for her feline friends). Her daughters are also allergic to a variety of foods. For Leila, avoiding a long list of life-threatening allergies is particularly difficult in a foreign country where you’re constantly expected to enjoy hors d’oeuvres, buffets and seated dinners on the diplomatic circuit.

“I am seriously allergic to most fruits and vegetables and I am glucose-intolerant,” Leila explained, listing the types of foods she cannot eat, including anything with seeds, dairy or flour. 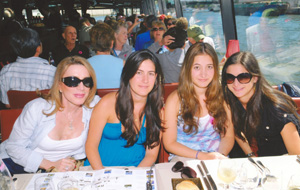 Leila Beale enjoys a trip to Paris with her three daughters: Paloma, Chantal and Melissa.

Leila though has learned to live with dozens of allergies and created her own unique way of dealing with the limitations. Before she leaves for a reception, she packs dried figs, rice cakes other bite-size treats in her purse to help her make it through the evening’s probably off-limits cuisine.

“My favorite kind of restaurant is Japanese. I have sashimi without the soy sauce because it has gluten, no cucumbers but rice and wasabi,” she said. Otherwise, she asks for poultry or fish, lightly grilled in oil, and steamed asparagus or mushrooms.

“When I am flying I have to be very careful. One time I ate my meal on the plane and I collapsed. Now, I take my usual figs and rice cakes. I can also eat an apple or a banana.”

She can’t even stop at the farmer’s market at the end of her street in Chevy Chase. “Just the aroma of the fresh corn gives me trouble,” she said.

Despite the dangers foods pose for her, Leila says she loves to cook. “I specialize in Mediterranean cuisine, especially Portuguese and Spanish; Brazilian too. I preferably like to cook seafood.”

But “I don’t fry and I don’t have any butter in the house,” she said. “We just use Mediterranean rock salt at the table.”

In addition to her other dietary restrictions, Leila has banned sugar from their home. “There is no sugar in my house. My husband buys his own sugar for a Caipirinha,” the national drink of Brazil that is made with Cachaça, a powerful distilled spirit made from sugarcane juice.

But she preserves other mealtime traditions of her homeland, including late eating: “Since I’m Brazilian, we usually don’t eat until 10 or 11. I don’t go to bed until 2 a.m.”

Leila said she calls all three countries she’s lived in — Brazil, Barbados and the United States — home, and appreciates each for its distinct attributes.

“In Barbados, you have the sea and the lifestyle that goes with it. I especially like sitting around outside or going for a stroll. There’s always a sea breeze and you can hear the waves. I love the sunshine. Barbados is eternal summer. I especially enjoy jazz on the beach,” she said.

“Brazil’s beautiful landscape is so varied: the sea, the mountains and the prairie. You can find everything. I love the people and their culture. There is such a variety of taste and customs that are quite unique — and, of course, Brazil’s special rum.”

“A cosmopolitan city like Washington is more than one place — it has cultural diversity. There is such an influence of so many other cultures. It’s a little map of the world so you can experience a little bit of everything. Here, you can travel without leaving home. You can taste foreign lands. I love it.”