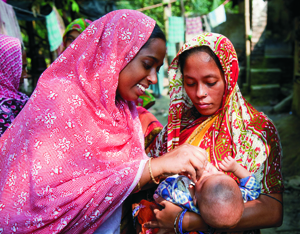 SEATTLE — The world’s largest private charitable foundation, established by the richest but arguably most generous man in U.S. history, hopes to involve Washington-based diplomats in its efforts to improve health care throughout the developing world.

On June 27, the Bill & Melinda Gates Foundation hosted a panel discussion and lunch for 29 ambassadors visiting Seattle as part of a three-day “Experience America” visit organized by the State Department (see related story). The panel’s theme: “Seattle as a Global Health Hub” and “How Ambassadors Can Be Partners Abroad.”

The diplomats listened intently as topics ranged from the role of animals in food security to the development of vaccines to fight tuberculosis, AIDS and malaria.

“We’ve already seen the world cut extreme poverty in half, so progress is possible,” Susan Desmond–Hellmann, CEO of the Gates Foundation, said during a welcome lunch for the ambassadors. “We’re inspired by that, but the past is no guarantee we’ll be effective in the future. We know that progress depends on thousands of NGOs doing work on the ground, and on the private sector investing in the poorest. And that depends on you — the representatives of governments around the world — making that happen.”

The Gates Foundation was established in 2000 by Microsoft co-founder Bill Gates and his wife Melinda. Its primary aim overseas is to enhance health care and reduce extreme poverty, and in the United States to expand educational opportunities and access to information technology. With an endowment of $38.3 billion, the foundation now ranks as the largest of its kind worldwide. As of May 2013, Bill Gates (who tops this year’s Forbes list of the globe’s wealthiest people, with a net worth of $78.9 billion) had personally donated $28 billion to the Seattle-based foundation.

“Through the Gates Foundation, Bill and Melinda Gates decided to devote their energies to achieving global health equity,” said Lisa Cohen, executive director of the Washington Global Health Alliance (WGHA), one of the many nonprofits that receive funding from the foundation. “What they’ve done is shine a light and inspire people to tackle these long-term, often astonishingly complicated problems.”

Cohen said Seattle-based WGHA received a $1 million, three-year startup grant from the Gates Foundation and is currently in the third year of a $250,000 grant. Her organization, operating on an annual budget of $600,000, partners with World Vision, PATH, Washington State University, the University of Washington and other entities to “leverage the collective expertise of our 60-plus members” on global health issues.

“We’ve got 33 global health organizations within walking distance from where we are now. There are more than 200 global health organizations in this state, working in 156 countries on more than 2,500 projects,” explained Cohen, a former journalism professor. “There’s a culture of compassion in this state, and a can-do sort of attitude that we want to address problems and that we want to do it together. But it has to be done with the countries as partners. It can’t just be lip service.” 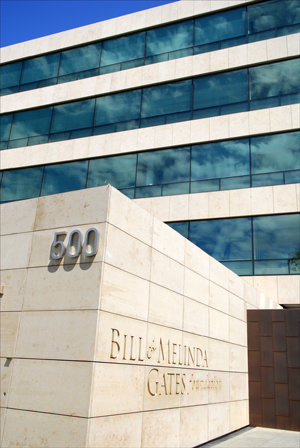 D.C.-based ambassadors visited the Bill & Melinda Gates Foundation as part of a State Department-hosted trip to Seattle in June.

The Gates Foundation prides itself on its risk-taking, results-oriented, business-like approach to tackling endemic problems in the developing world. It has tapped scientists around the planet for innovative ideas and given grants to hundreds of groups, from the PATH Malaria Vaccine Initiative to the United Negro College Fund. And it delves into the nitty-gritty hurdles of global health, from the lack of nutrition in tropical crops; to the transportation and storage challenges of delivering high-quality vaccines to poor areas; to the complexities of treating diarrheal diseases in young children.

On that note, while the foundation is known for its work in areas such as childhood immunization and HIV/AIDS, it also explores the complex, interconnected web of issues that hinder prosperity in the developing world.

“Women and children need a good protein supply, and for most people, the best sources of these are animal protein, whether it’s milk, eggs or meat. The ability of children to make an immune response is based on the ability to make protein,” he said.

Guyana’s ambassador, Bayney Karran, asked the panel of experts what the Gates Foundation was doing to combat the spread of cancer, diabetes, heart disease and other non-communicable diseases (NCDs) throughout the English-speaking Caribbean.

It’s a concern shared by Ambassador Neil Parsan of Trinidad and Tobago, who noted that 45 percent of his country’s 1.2 million people suffer from hypertension.

In fact, NCDs, also known as chronic diseases that are often caused by tobacco, alcohol and obesity, are now the leading cause of death and disability in the world — and are on the rise as countries become wealthier.

“The foundation is investing in areas where we feel we can make the most difference,” Anita K.M. Zaidi, director of enteric and diarrheal diseases at the Gates Foundation, replied. “NCDs are preventable through tobacco control and diet. We’re taking baby steps toward tobacco control as a global issue, but it’s currently not our focus.”

It is a prime focus for Steve Davis, president and CEO of PATH (Program for Appropriate Technology in Health) and Christopher J.L. Murray, director of the University of Washington’s Institute for Health Metrics and Evaluation, who told the panel that the scourge of non-communicable diseases is of tremendous importance.

“Chris [Murray] and I are on a Council on Foreign Relations task force on what American policy should be toward NCDs,” Davis told the ambassadors. “A lot of organizations are funding NCD work, and we’re doing work on low-cost diabetes treatment in poor countries. But in general, funding is way behind.” 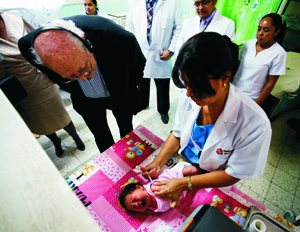 Added Murray, a former top official at the World Health Organization: “In Central America, there’s a huge upswing in chronic kidney diseases. But that shift in non-communicable diseases in 20 or 30 years took more than a century to happen in high-income countries. Most governments aren’t really prepared to deal with it. You see this in Southeast Asia, Latin America, the Caribbean and China.”

Among other things, Murray is a founder of the Global Burden of Disease (GBD) measurement, described as a systematic effort to quantify the health burden of diseases, injuries and risk factors by age, sex and geography over time.

Several years ago, Murray launched a collaborative effort by 500 researchers from 50 countries that resulted in the 2010 GBD study. This latest iteration of the effort — which is funded by the Gates Foundation — generated nearly 1 billion estimates of health outcomes for 187 countries and was published in the December 2012 issue of The Lancet.

“Each year, we produce an assessment of more than 1,000 diseases and 68 risk factors for each country, and we deliver this through a whole series of mechanisms,” Murray told the ambassadors. “It’s built around a collaboration of more than 1,000 investigators who are helping us to understand what the strengths and weaknesses of different countries are. The whole process is done on an annual basis.”

He added: “Next year we’ll be tracking where the money goes. The underlying belief there is that richer debate in each country about what’s important will actually change the way we go about improving health. You can’t capture the world’s data and synthesize it in a meaningful way without it being a very broad undertaking.”