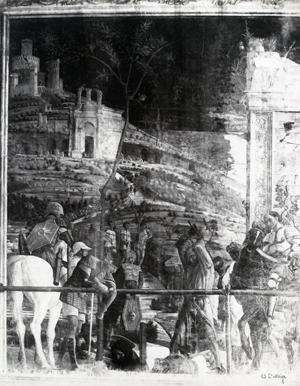 World War II caused innumerable losses for nations around the globe, but a new exhibition at the National Gallery of Art seeks to draw attention to an oft-overlooked area of destruction: the art and architecture damaged in the war. Hidden in the study center of the East Building, “In the Library: Preservation and Loss during World War II” details efforts to preserve and recover art during and after the fighting. The timely exhibition, coming on the heels of the 70th anniversary of the D-Day invasion in Normandy, also pays homage to works that were rendered irreparable by war.

Andrea Mantegna’s “Scenes from the Life of St. James: Martyrdom” from Italy’s Church of the Eremitani was destroyed in the Allied bombing of March 1944.

The foremost effort to protect works of cultural value was known as the Roberts Commission, a presidentially appointed commission that focused on artwork in Allied-occupied parts of Europe. The commission formed the Monuments, Fine Art, and Archives (MFAA) military program, whose participants were known as Monuments Men.

From 1943 to 1946, the commission and Monuments Men worked to protect and rescue pieces deemed to have cultural significance — a first in modern warfare. The MFAA program paid special attention to works that had been hidden or stolen by the Nazis. The mission to save these masterpieces — run by a motley crew of museum directors, curators and art historians — was recently dramatized in the George Clooney film “The Monuments Men.”

“In the Library” features two albums assembled by MFAA Sgt. Gordon O. Chadwick, a prominent New York architect who voluntarily enlisted to serve in the war. The first album shows damage incurred in Württemberg; the second documents Baden. Both were former states in southwestern Germany that later merged to become Baden-Württemberg, which was part of West Germany prior to the country’s reunification. According to Chadwick’s album, because Württemberg was a relatively decentralized region, art was also decentralized: It was spread among various estates and galleries, rather than concentrated in a single museum or area. As a result, Württemberg did not suffer terrible losses. One of the most precious works, sculptor Tilman Riemenschneider’s Marien-Altar, was housed in a church in the town of Creglingen and was mercifully unharmed.

In Paris, meanwhile, the government had to move quickly to protect the treasures of the Louvre as Hitler advanced on the city; the works were moved to Chateau de Valençay until the war was over. The National Gallery exhibition contains four photos depicting the evacuation of the Musée du Louvre in September 1939. The pictures look like something out of a movie, with tremendous works of art being wrapped with packing materials and ferreted out. The photographs, by French photographer Laure Albin Guillot, depict a surreal scene: a staircase in the museum covered with wooden planks to protect its surface; “The Winged Victory of Samothrace,” a marble sculpture dating back to the second century BC, being roped and stuffed into a packing crate; an empty pedestal, upon which the “Venus de Milo” once stood, and two workers transporting the ancient Greek sculpture from the gallery. Most chilling, however, is a picture taken by an anonymous French photographer in which the Grande Galerie of the Louvre is completely emptied of artwork. 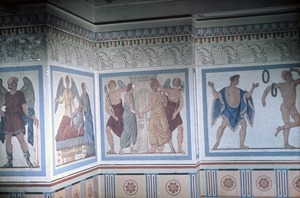 Scenes from Etruscan wall paintings in Berlin’s Altes Museum depict the progression of the world from chaos to civilization. The mural was destroyed in 1945.

Many sculptures, in fact, were hidden away for safekeeping during the war. The crypt of the Church of Saint-Sulpice in Paris safeguarded works such as Jean-Antoine Houdon’s bust of Voltaire and Jacques Sarrazin’s “Two Seated Angels.” Inspired by René Huyghe, the chief curator of the Louvre who oversaw the evacuation of artwork, the photographer Brassaï produced a series of pictures of the sculpture stored at Saint-Sulpice; some of these are on view at the National Gallery. The breathtaking photographs depict sculptures wrested from their homes and hidden deep within the historic church, where, thankfully, the equally historic pieces of art survived the war.

Some works, however, were lost altogether during World War II. For example, the art that once filled the Kaiser Friedrich Museum in Berlin was moved to the Friedrichshain flak towers, large anti-aircraft gun blockhouses, on the assumption they’d be a safe place for storage. Yet toward the end of the war as Berlin was being bombed, the towers became targets and many of the works inside were burned. Among the destroyed pieces were Caravaggio’s “Saint Matthew and the Angel” and works by Paris Bordone, Andrea Mantegna and Raphael. 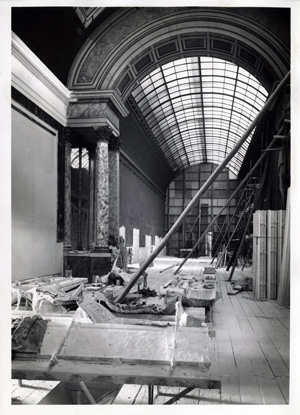 An anonymous French photographer took a picture of the Grande Galerie in the Louvre in Paris, emptied of its artwork in September 1939.

Then, of course, there were wartime efforts to restore looted works in Germany. The Munich Central Collecting Point (MCCP) was the largest of four German depots for stolen works to be taken for restitution. After the MCCP ceased all restitutions in 1951, it sent its records to Washington, D.C., where printing of the 40,000 film negatives was only completed in 2006. They can now be seen in the National Gallery’s department of image collections and include treasures such as Henri Matisse’s “Pianist and Checker Players” and Leonardo da Vinci’s “Lady with an Ermine.”

“In the Library” offers a fascinating look at World War II through the lens of art, highlighting the extremes gone to by both sides to protect and restore cultural treasures. Its one-of-a-kind artifacts, such as the Monuments Men albums and MCCP photos, make it all the more engrossing. Though many protection and restoration efforts were successful, others failed, and this exhibition offers a rare look at works that have been forever lost to history.

In the Library: Preservation and Loss during World War II

through Sept. 26
National Gallery of Art
on the National Mall between 3rd and 9th Streets on Constitution Avenue, NW
For more information, please call (202) 737-4215 or visit www.nga.gov.