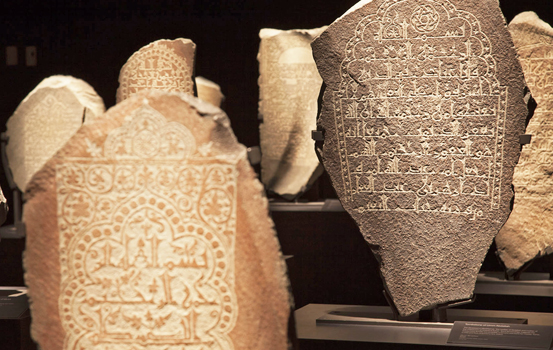 Artifacts unearthed from the shifting sands of the Arabian desert in the past 40 years have radically transformed our understanding of this ancient region. Some 300 objects now on display at the Arthur M. Sackler Gallery illuminate Saudi Arabia’s pre-Islamic heritage and its rise to prominence as a cultural and religious center.

Organized in conjunction with the Saudi Commission for Tourism and Antiquities, “Roads of Arabia: Archaeology and History of the Kingdom of Saudi Arabia” features objects, some dating as far back as 7,000 years ago, from more than 10 archeological sites throughout the Arabian Peninsula. The exhibit opened in the summer of 2010 at the Louvre in Paris and traveled to Barcelona, St. Petersburg and Berlin before making its American debut at the Smithsonian’s Sackler Gallery. 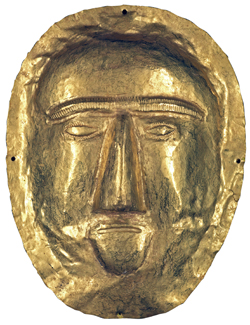 A gold funerary mask from the 1st century

The exhibit is organized geographically and historically in three parts, which chronicle the cross-cultural exchange of ancient trade routes, the rise of Islam as seen in the pilgrimage trails that led to Mecca, and finally the unification of the modern Saudi kingdom in 1932.

Today, we know Saudi Arabia as the world’s leading producer of oil, but long before it struck black gold, it was a hub for the global incense trade. The world was a smelly place in antiquity. Before the advent of flush toilets, public waste collection and deodorant, people relied on incense to combat the malodorous byproducts of human civilization. Beyond its olfactory benefits, incense served important religious and medicinal purposes. Made from the resin of plants found only in southern Arabia and east Africa, frankincense and myrrh were the most coveted.

As early as 1200 B.C., the camel revolutionized Arabian commerce. Caravans traversed the deserts of the Arabian Peninsula, bringing incense to the temples and royal courts of the Near East and Mediterranean, returning with spices and exotic luxuries. Once worth more than gold, “incense was the oil of the ancient world,” observed Massumeh Farhad, the Sackler’s curator of Islamic art. The lucrative trade gave rise to a complex network of trade routes dotted with oases and flourishing towns. Artifacts found along these ancient roads reveal the lost history of Arabia’s pre-Islamic past.

A young royal girl’s gold funerary mask and elaborately decorated tomb found at an archeological site in Thaj suggest it may be the lost city of Gehrra, a center of wealth and power in pre-Islamic Arabia that controlled the incense trade in its Hellenistic heyday.

Other artifacts are evidence of thriving exchange between Arabia and neighbors such as Egyptians, Syrians, Babylonians and the Greco-Romans, as seen in chlorite vessels from Iran, for example, and a statue with Mesopotamian features. Decorative motifs such as a bull with a disc between its horns confirms integration of Egyptian and Mesopotamian symbolism into local religious practices. 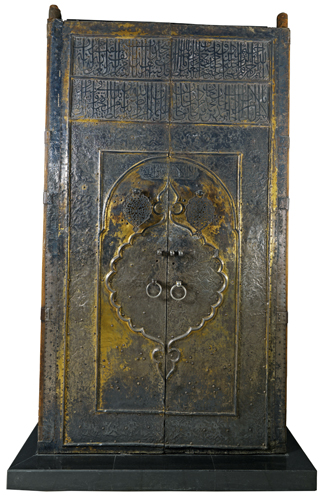 A door of the Ka’ba from the 16th-century Ottoman dynasty is among the wide-ranging relics in “Roads of Arabia” that trace not only Saudi Arabia’s rise as a religious Mecca, but also its rich pre-Islamic history.

One of the oldest objects in the exhibit is a stone carving of a horse dating to 7000 B.C. A ridge near the horse’s mouth resembles a bridal, suggesting that horses were domesticated thousands of years earlier than previously thought — and in Arabia rather than Central Asia. 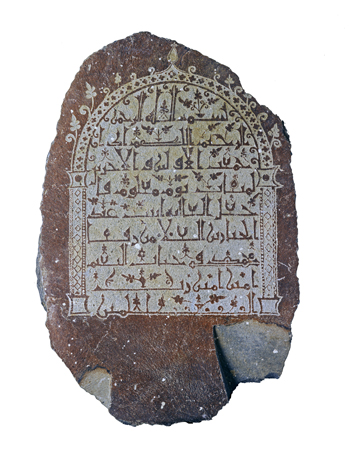 Haunting stone steles (vertical stone slabs used for commemorative purposes) give visitors a glimpse into the rituals of people who lived 6,000 years ago. Among the earliest known objects found in the Arabian Peninsula, these anthropomorphic figures were probably used in burial or religious practices.

Flash forward to the 7th century and another network of roads emerged, bringing religious pilgrims to holy sites in Mecca and Medina — and marking the rise of Islam. The anthropomorphic forms that dominated the pre-Islamic period gradually gave way to an emphasis on the written word, inspired by the Koran.

Highlights of this section include some 20 tombstones from the now-destroyed al-Ma’lat cemetery. The stones stand erect in rows that allow visitors to walk among them as if visiting an ancient graveyard. Translations of detailed inscriptions bring to life the stories of those who made the holy pilgrimage in antiquity, including a father and daughter who died on their journey together.

The giant ornate doors of the Ka’ba, Islam’s holiest sanctuary, inspire a sense of awe that the religion’s earliest followers surely felt upon reaching their destination.

The exhibit concludes with the creation of the kingdom of Saudi Arabia in 1932, exploring the country’s history of archaeology through photographs of dig sites, travel books and maps. Several objects that belonged to King Abdulaziz (1876-1953), the kingdom’s first monarch, are displayed as well, including his Koran.

“Roads of Arabia” is the focal point of the Sackler Gallery’s 25th anniversary celebration and is accompanied by a series of special events.

Julian Raby, director of the Sackler and Freer Gallery of Art, said the experience offers a “window onto a country whose pre-Islamic past is little known to anyone other than a handful of scholars today, and whose Islamic history is often misunderstood.”

Roads of Arabia: Archaeology and History of the Kingdom of Saudi Arabia