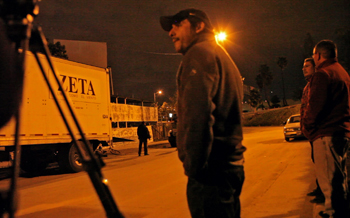 Director-writer-producer Bernardo Ruiz, above, chronicles the valiant efforts of Mexican journalists working for Zeta, an investigative weekly newspaper, in the searing documentary “Reportero.”

According to the Committee to Protect Journalists, 48 reporters have been executed or disappeared in Mexico from December 2006 until December 2011, the tenure of Mexican President Felipe Calderon. After he took office, he launched a major offensive against Mexico’s notorious, powerful drug cartels. The controversial new war on drugs unleashed a bloodletting of escalating violence across the country, leaving thousands of innocent bystanders as victims.

Director-writer-producer Bernardo Ruiz’s searing documentary “Reportero” tracks the valiant efforts of Mexican journalists by focusing on Sergio Haro, a senior reporter at Zeta, an investigative weekly newspaper boasting 30,000 readers that was founded in 1980. Despite considerable dangers that over the years have taken the lives of its staff and one of its co-founders, Zeta has doggedly covered corruption and the country’s burgeoning illicit drug trade, including its collusion with government, police and military officials.

“Reportero” will premiere locally on PBS as part of POV (Point of View), which, in its 25th season, has become the longest-running independent documentary series on American television. The film marks Ruiz’s first documentary feature, though he’s worked on other documentary projects over the years, including exposés of the nation’s high school dropout crisis and Mexican immigrant communities in New York.

Ruiz, in fact, came to “Reportero” by accident. While researching a film on deported children in Mexicali, he had a brief interview with Haro that turned into a three-hour discussion.

“From that first meeting forward, I understood that all of the narrative threads I had been chasing — immigration, corruption and the rise of narco power in Mexico — converged in Sergio’s story,” the director said of the veteran journalist, who’s been reporting on Mexico’s underbelly for 25 years, despite numerous threats on his life and the deaths of three of his colleagues.

“What goes through a reporter’s mind when he or she is about to break a story that is, as Sergio says in the film, ‘like a grenade before you remove the pin?'” Ruiz said he wondered. “Why persist when the risks are many, the benefits few?”

Haro and the reporters at Zeta have displayed such heroism since the paper’s humble beginnings in 1980. Jesús Blancornelas had been fired by five newspapers for not towing the line, so he and Héctor Félix Miranda started the journalist-owned publication to provide a different voice from the mainstream media mainly controlled by the government. Zeta was based in Tijuana, but its printing plant was placed in California for added security across the border. At first, Blancornelas also managed Zeta from the United States.

With help from leads provided by readers, Miranda’s well-read columns satirized Mexico’s political and social elite to expose corruption. “My work in Zeta is proof that freedom of expression exists in Mexico,” he once proclaimed. “That others don’t practice it is their own fault.”

The others had good reasons to avoid angering the establishment. On April 20, 1988, Miranda was shot dead by killers allegedly on the payroll of Jorge Hank, scion of a leading Mexican family. Hank avoided being investigated by police and later won election as the mayor of Tijuana.

In 1987, Haro initially joined Zeta as a photographer. Taking a sabbatical of sorts in 1997, he and Benjamín Flores founded Siete Días, another independent newspaper that strongly attacked local narcotic kingpins. Shortly after turning 29, Flores became another murdered journalist whose assassin was freed by the courts. Fearlessly fighting back, Haro recalled, “We mocked [the killer’s] release, with photos of all the kilos he was trafficking.”

As leader of Zeta, Blancornelas — who in 1997 narrowly escaped an ambush by 10 gunmen only when shrapnel from the hail of bullets ricocheted and hit the lead assassin in the eye — employed a security detail exceeding 20 guards.

Haro, too, lives under the constant threat of death and, like many Mexicans today, has enlisted bodyguards for protection. Just as constant is the aura of impunity that continues to plague the country, where the murders largely go unsolved.

So why keep risking your life for a critical but relatively thankless job? “It’s easier to look the other way and not cover this issue,” Haro admits in the documentary. “But in the end you would become another accomplice. For the rest of my life, I only want to be a reporter.”

“Reportero” premieres Jan. 7 at 10 p.m. on the PBS television network with additional screenings afterward. The film will also stream on POV’s website from Jan. 8 to Feb. 7. For more information, visit www.pbs.org/pov/reportero.