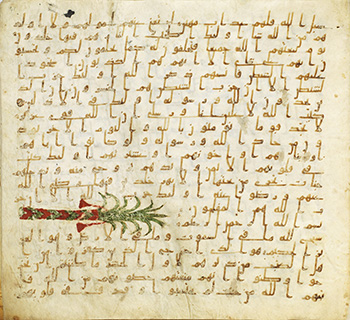 “The Art of the Qur’an: Treasures from the Museum of Turkish and Islamic Arts” marks the first major exhibition in the United States of Islam’s holy text — and the exceptional show cannot be missed.

“The Art of the Qur’an” features more than 60 of the most important Qur’an manuscripts ever produced from the Arab world, Turkey, Iran and Afghanistan, spanning nearly 1,000 years of history.

The exhibition at the Arthur M. Sackler Gallery stretches over two floors and features more than 60 Qur’ans (Korans), many of which have never been shown outside of Turkey. The darkened rooms, with only the texts and descriptions lit, invite visitors to have a meditative experience as they study the splendidly decorated manuscripts, which span 1,000 years of history.

The dimly lit environment is more than fitting, given how transfixing the exquisite scripts, repeated geometric patterns and bursts of gold in many of the works are. Because artistic depictions are discouraged in Islamic art, the show highlights the way calligraphy, ink, color and gold on paper can invoke both artistic beauty and religious power.

The exhibition is mainly composed of works from the museum in Istanbul along with a few Qur’ans from the Sackler’s own collection, curator Massumeh Farhad told The Washington Diplomat.

“We ended up borrowing 48 of their best Qur’ans, which is really unprecedented,” Farhad said. “It’s the first time so many of their works are seen outside of Istanbul, and they really are among the finest in the world. We are extremely lucky to have them here on view, and that’s one of the reasons why this exhibition is exceptional.”

The Sackler supplemented the pieces from the Museum of Turkish and Islamic Arts with some of its own works, “so we use the opportunity to highlight some of the treasures we have here at the Freer | Sackler,” she added. 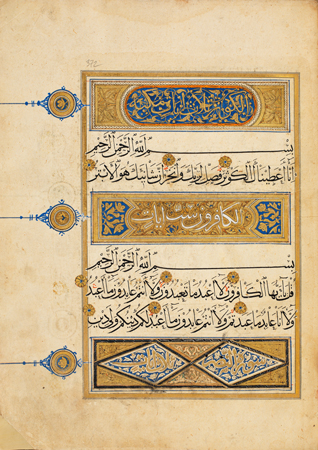 To top it all off, this show is not only the first major exhibition of Qur’ans in the U.S., but the last significant one on the topic in the West since a 1976 exhibit at the British Museum in London, Farhad pointed out. “It’s also important in that respect,” she noted.

The dozens of holy texts on display at the Sackler Gallery represent “manuscript production throughout the Islamic world from Afghanistan in the east to, of course, Turkey and the Mediterranean in the West,” Farhad explained. And in terms of time period, the exhibition takes on a large swath of history, with Qur’ans on display dating from late 7th- or early 8th-century Damascus to 17th-century Istanbul.

Originally created for powerful rulers of the Islamic world, the manuscripts were highly sought after by the Ottoman elite, including sultans, queens, pashas and viziers who viewed them as cherished possessions, according to the Sackler Gallery. “They were offered as gifts to cement political and military relationships or recognize special acts, and they were also given to public and religious institutions to express personal piety and secure political power and prestige,” a museum press release states.

“Each one in some way is a highlight,” Farhad told us. “We really focused on the finest of the finest and the works that can tell a story.”

The exhibition’s wide array of Qur’ans — some monumental in scope, others with delicate calligraphy decorated in brilliant gold — are wonderful to see in person, with beautiful details that reveal themselves on closer study.

“And you have some Qur’an folios that are the size of an iPhone — the range is really staggering,” Farhad noted.

The large-scale Qur’ans are obvious stunners, with a particularly breathtaking moment in store for visitors as they walk downstairs halfway through the show and find themselves staring down a five-foot-by-seven-foot copy. The illuminated manuscripts, though, are the biggest treat, with gold script dancing across the pages, intercutting with remarkably intricate geometric medallions. Another memorable copy to look out for features paper from China, sprinkled with gold flecks from Iran.

The exhibition is a book lover’s dream, reveling in the different sizes, formats, styles and illuminations on offer. There is a section dedicated to how the Qur’an is produced, so visitors can see sample tools, ink and gold that calligraphers would have used to copy the holy text. Visitors can even try their hand at coloring themselves by taking part in the “create challenge” midway through the show. 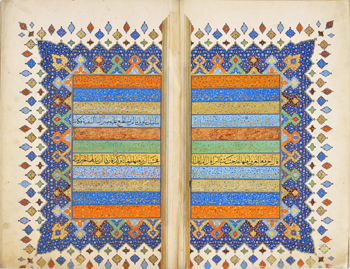 Beyond the practical elements involved in creating the works, the exhibition also delves into the religious aspects. Visitors can read up on Islam and the Qur’an itself in informative captions and wall labels that encourage a nuanced understanding of the religion and sacred text.

The show has been carefully devised and displayed, from the dim light, to the low sound of recitations in some rooms, to the beautiful deep purple and midnight blue of the walls, to the thoughtfully discussed religious elements. All of this attention to detail invites viewers to stay and linger over the pieces, soaking in the meticulous splendor and splashes of gold of these visually exquisite, historically significant works.

The Art of the Qur’an: Treasures from the Museum of Turkish and Islamic Arts