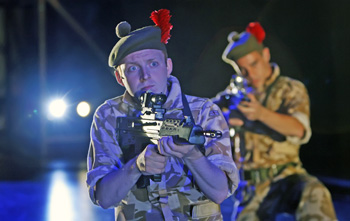 As the Shakespeare Theatre Company (STC) basks in the recent success of its 25th anniversary season and a 2012 regional Tony Award, while gearing up for another innovative season, the theater is also embroiled in a behind-the-scenes, real-life drama that, if staged, might rival one of the Bard’s sagas.

Ryan Fletcher stars in the National Theatre of Scotland’s production of “Black Watch,” which returns to the Shakespeare Theatre for its 2012-13 season.

A court hearing this fall will decide whether the STC will win a preliminary injunction to stay at the Lansburgh Theatre, as part of a fight against its management company, the Lansburgh Theatre, Inc. (LTI), which has threatened to evict STC if it doesn’t pay an enormous increase in rent. If won, the decision would prohibit any eviction. Although the STC and its legal counsel are confident they will prevail, if they lose, it could cost the D.C. community a cultural landmark.

The Lansburgh, located at 450 7th St., NW, which has housed the Shakespeare Theatre Company for the past 20 years, is one of two STC performance venues. The company also stages productions in the newer and larger Harman Hall, which it owns and is located down the street from the Lansburgh.

In addition to the theater, the Lansburgh is home to apartments and retail space owned by Gunwyn/Lansburgh Development Corp.

“As part of this deal, Lansburgh Theatre, Inc (LTI) was established as a specialized nonprofit charity solely created to serve as the Theatre’s landlord and support the Shakespeare Theatre Company,” the release states.

But STC says the longstanding deal fell apart when LTI recently tried to raise the rent to $480,000.

“Although most of the media focus has been on the rent hike [a 700 percent increase], the main issue is that what LTI is doing is illegal and commits violations of public charity rules,” Randy Miller, counsel to the STC and a partner at Arnold & Porter LLP, told The Washington Diplomat. 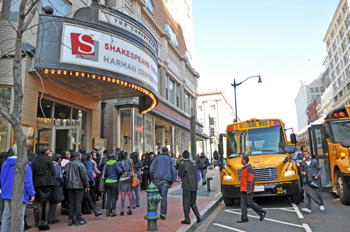 This fall, the theater company also heads to court to fight against a major rent hike for its Lansburgh Theatre.
LTI claims it raised the rent to fund repairs for the Lansburgh building. Miller clarified that the money STC pays (currently about $70,000 per year) isn’t rent, per se, but rather goes into a trust fund used for improvements to the Lansburgh building. “It is more than enough and there is a surplus of $500,000 to $600,000 currently in the trust fund,” he said.

Miller also says LTI cannot terminate its partnership with STC because the duration of LTI is “perpetual,” as long as STC remains a viable theater company.

The STC, meanwhile, won a court order to temporarily stop the eviction that had been scheduled for June 15 and won the right to keep the case in D.C. Superior Court, after LTI tried to move it to U.S. District Court. Keeping it in D.C. Superior Court will be advantageous because it will keep the battle closer to the local community, which will be most affected by the litigation’s outcome, said Miller. Unfortunately, the jurisdiction shuffle will likely push back the hearing on the motion for a preliminary injunction, originally scheduled for Sept. 21, until sometime in October, he noted.

Miller predicts LTI’s motivation in trying to evict STC from the Lansburgh is economic gain. Since the theater was built in the early 1990s, the area surrounding the theater, known as Penn Quarter, has skyrocketed in value.

“While LTI, in its inception agreement as a charity, is not supposed to profit from the Lansburgh building, forcing us out would be using a charity for private economic purposes,” he said.

Confident it will prevail in the pending litigation fight, the Shakespeare Theatre, led by longtime Artistic Director Michael Kahn, has scheduled an exciting season that includes old standards but also pushes the theatrical envelope.

In a discussion with The Diplomat, Kahn said the theater will stage three productions that it has never done before.

“We’ve never done a Russian play, much less a Russian comedy,” Kahn said, referring to the season opener, “The Government Inspector,” a satire of provincial bureaucracy by Ukrainian-born, 19th-century playwright Nikolai Gogol that runs from Sept. 13 to Oct. 28 at the Lansburgh. 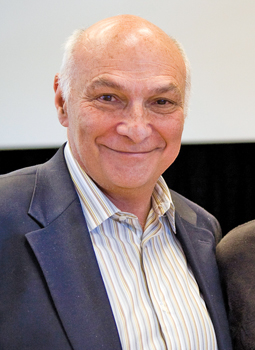 Shakespeare Theatre Artistic Director Michael Kahn says he’s excited about the upcoming season, which includes three productions never before staged by the company, as well as the return of a rotating repertory in Harman Hall.

Also on the horizon at the Lansburgh is Eugene O’Neill’s “Hughie,” which casts Richard Schiff from NBC’s “The West Wing” in the story of a man whose illusions of a grand lifestyle waver after the death of the stranger who quietly validated his larger-than-life confidence. The fall season also features “A Midsummer Night’s Dream” in the Sidney Harman Hall.

Kahn is particularly excited about bringing back rotating repertory in the Harman Hall, which STC didn’t do last season. Actors and actresses will switch off every other night in the spring of 2013 between Friedrich Schiller’s “Wallenstein” — never before produced in the United States — and Shakespeare’s “Coriolanus.” The two plays are thematically related; both are about major military figures who turned against their countries.

The season is also punctuated by several special presentations. In continuing its relationship with the National Theatre of Scotland, STC will produce “Black Watch,” a graphic account of the Scottish regiment fighting in Iraq, after a short, sold-out run last year at Harman Hall; as well as “The Strange Undoing of Prudencia Hart,” which ran at the 2011 Edinburgh Fringe Festival.

And for one special night in December at the Lansburgh, STC will stage a new French-language revival of “Les Liaisons Dangereuses” directed by John Malkovich. Kahn says the production of the 18th-century tale will be “different, youthful, surprising and modern.”

Enthusiastic about the upcoming season and confident STC will win its court case, Kahn said he “doesn’t think there will be a worst-case scenario” regarding its litigation with LTI, and that just as it has for a quarter of a century, the show will go on — at the Lansburgh.

“I don’t know how the outcome will be,” Kahn said, “but we expect to be at the Lansburgh for many years to come.”

For more information on the Shakespeare Theatre Company and its upcoming season, please call (202) 547-1122 or visit www.shakespearetheatre.org.