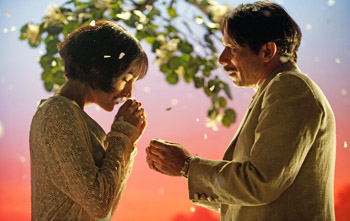 Golshifteh Farahani as Irâne, left, and Mathieu Amalric as Nasser Ali Khan star in “Chicken with Plums,” a story of unrequited love in 20th-century Tehran.

“Chicken with Plums,” written and directed by Marjane Satrapi and Vincent Paronnaud (“Persepolis”) is a poignant story about lost love whose universal meaning resonates across cultures. Set in Tehran in the mid-20th century, the characters speak French, a common language spoken by educated Iranians, especially at that time.

In 1958, Nasser Ali Khan (Mathieu Amalric) lives a deeply solemn existence in his last days. Already rather melancholic, he loses all desire to live after his precious violin is broken by his wife following a domestic squabble over his lack of contributing to the household finances. Though well known as a leading musician, Nasser’s fame and talent hasn’t made him much fortune, so the loss of the irreplaceable violin deprives him of all that he has.

So Nasser simply decides to await his death in bed, a morbid premise for a film but one that sets up an elaborate story as Nasser recalls the younger days of his past. And he muses over everything since then, putting together the pieces of a sorrowful life in which he lost his one true love, Irâne (Golshifteh Farahani), whose rich merchant father (Serge Avedikian) wouldn’t bless what he insisted would be her ill-destined marriage to a poor musician. Over 20 years, he traveled the world, channeling those woeful emotions into making the most beautiful music.

After returning home, his mother compels him into a marriage with Faringuisse (Maria de Medeiros), an educated woman who has always adored him, though he doesn’t return an ounce of that affection. They have children, but he neglects them almost as much as their mother, finding them all to be rather foreign creatures. In his dreams, he even speaks with the Angel of Death, Azraël (Edouard Baer), who tells him his children’s future.

Thus, Nasser’s reveries are at times strange, heartbreaking yet universally real, revealing the profound regrets and mistakes that we all harbor to some degree. It’s a complex mosaic of one man’s life that builds throughout the film and comes together at the end to complete the puzzle of why he wanted so badly for that life to be over. 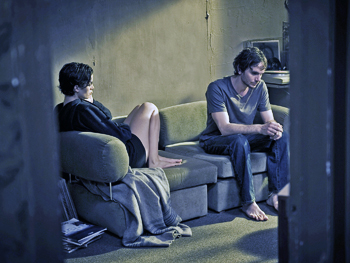 Canadian writer-director Anne Émond’s debut feature, “Nuit #1,” makes its mark with a no-holds-barred portrait of an accidental relationship: What starts out as casual sex turns into something more. The intimate experience is reinforced by the graphic sex happening on screen, so squeamish moviegoers should be aware of the explicitness.

After Clara (Catherine de Léan) and Nikolaï (Dimitri Storoge) meet at a dance party, the pair go back to Nikolaï’s place and have wild sex. While he’s sleeping, she tries to slip out of the apartment, but he catches her and convinces her to stay. What at first glance appears to be a one-night stand ends up being a confessional encounter.

During the day, Clara’s mild-mannered profession teaching third grade provides her with a good cover in mainstream society. Every night, however, she transforms into an insatiable party girl who becomes addicted to extreme highs using alcohol, drugs and sex. She’s obsessed with getting some kind of charge to grasp at any kind of meaning in her empty life.

Despite being rather handsome, 31-year-old Nikolaï lives a stoic existence as a loner who keeps to himself. He views himself as a student of great literary works, none of which he can complete. He’s unable to make any progress to realize his grand dreams, which he can’t properly express to those around him. Similarly, he can’t stay on any kind of schedule enough to work for a living, so he gets by in a Spartan flat that mirrors his existence.

Despite its lonely undercurrent, “Nuit #1” works well because of its honest story, raw emotions and vivid acting performances. The new lovers, both misfits of sorts, share their most private thoughts with each other, finding a connection and companionship when they least expected it. 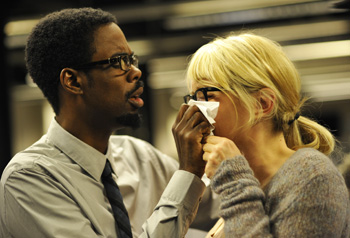 Chris Rock, left, and Julie Delpy, find their comfortable cohabitation upended when Delpy’s family comes for a visit in “2 Days in New York.”

At the 2012 Tribeca Film Festival, “2 Days in New York,” French actress-writer-director Julie Delpy’s delightful follow-up to 2007’s “2 Days in Paris,” was embraced by audiences at its well-received East Coast premiere. Its witty story, co-written by Alexia Landeau and Alexandre Nahon, develops into a wildly funny farce.

In a modest but stylish New York apartment befitting hip artistic types, French photographer Marion (Delpy) lives comfortably enough with her boyfriend Mingus (Chris Rock), a radio talk-show host and reporter, along with one child each from prior relationships and a cat. But their stable lives are upended when Marion’s jolly father Jeannot (Albert Delpy, Julie’s father in real life), her exhibitionist sister Rose (Alexia Landeau), and her sister’s ill-mannered boyfriend Manu (Alexandre Nahon) come for a visit, all cohabiting the now-definitely-too-cozy apartment.

Delpy’s direction is assured enough to maintain a sense of order amidst the chaos, bringing to the screen finely tuned comedic turns by the talented ensemble cast. As for the starring leads, Delpy’s neurotic persona hilariously contrasts nicely with Rock’s exasperated straight man.