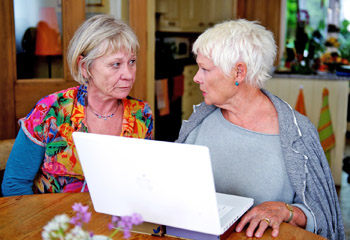 As the 2012 DC Shorts Film Festival returns for its ninth year, the once-nascent short film fest has grown into a pretty big powerhouse, showcasing 140 films from 27 countries from Sept. 6 to 16.

“We have films with something for everyone, from dramas and comedies to documentaries and experimental films,” proclaimed DC Shorts Festival Director Jon Gann. New this year: Local D.C.-area chefs will provide tasty paired snacks for patrons attending food-themed films. Here are some highlights of a festival that’s certainly not short on things to do and see:

Don’t miss a couple of global shorts fueled by a wattage of international movie stars such as Judi Dench and Gérard Depardieu. “While DC Shorts focuses on showing films with great stories, regardless of star power, it’s always great when the two coincide,” Gann noted.

“Friend Request Pending,” directed by Chris Foggin, is a charming comedy drama about two elderly female friends (including English Dame Dench) who embark on a social networking campaign to catch the attention of the most eligible bachelor around, the leader of the local choir.

The film competition takes place during the opening weekend, Sept. 6 to 8, when films are played in 18 separate 90-minute programs, each followed by an informative question-and-answer session with the filmmakers. From Sept. 9 to 16, all the films are screened again, allowing audiences another chance to catch what they missed during the competition weekend. Finally, on September 15 to 16, the festival concludes with the “Best of DC Shorts” screenings.

Nothing beats watching a film in a theater with fellow film lovers, but DC Shorts introduces a new feature in 2012 for viewers who want to see more or can’t make it to the theater at all. For $20, the online pass allows unlimited screenings from a desktop, laptop, tablet, smart phone or other Internet-enable device.

On Fri., Sept. 14, audiences can watch actors perform live readings of the six finalists in the DC Shorts Screenplay Competition. Audiences vote for their favorite script; the winning writer takes home a $2,000 prize. Festival-goers can also celebrate with the award winner at a wine and cheese reception.

In addition to the DC Shorts Screenplay Competition’s wine and cheese reception, other DC Shorts parties allow film festival patrons to mingle and mix with each other. Open bar and complimentary hors d’oeuvres can be enjoyed at the following events.