In a city teeming with urban redevelopment projects, perhaps none will ultimately be as transformative as D.C. uber-developer Douglas Jemal’s real estate venture in Ivy City.

For years, the gritty industrial district off of New York Avenue, NE, was best known as the site of the abandoned Hecht Warehouse, a sprawling homeless shelter and the oft-troubled Dream nightclub. But due in large part to Jemal’s redevelopment vision, Ivy City over the past few years has sprouted an organic grocery store, a new health club, a slew of breweries and distilleries, a gorgeous high-end apartment complex and a number of good new restaurants.

And there is more to come — much more. Jemal’s Douglas Development Corp. is preparing to break ground on another 550,000 square feet of retail, entertainment and residential properties directly across New York Avenue from Ivy City. The plans promise to eventually turn one of D.C.’s most dilapidated neighborhoods into one of its most vibrant. While Jemal’s grand vision is sure to transform an area characterized by blight and neglect, residents hope that the tide of gentrification sweeping D.C. doesn’t uproot the people who have made Ivy City their home.

For now, Ivy City’s food and drink options are the main draw for those seeking out the next new thing in D.C.’s ever-evolving restaurant scene. Over the past months, we’ve sampled much of what the revitalized neighborhood’s culinary scene has to offer and, on the whole, we’ve come away impressed. 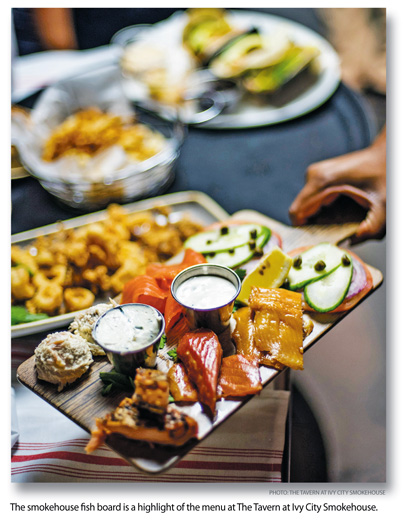 The first splashy new restaurant to open in the area was The Tavern at Ivy City Smokehouse, a spacious upstairs restaurant and live performance space with a retail fish market operating at ground level. The first thing you’ll notice about The Tavern is its roominess — a welcome change from the often cramped environs of trendy eateries in other parts of the city. It’s also attractively laid out with a large rectangular bar front and center and dining tables scattered throughout the former warehouse space.

It’s a comfortable and stylish place to hang out and catch a game on the big TVs at the bar while sipping on one of the numerous craft beers on tap. But the menu — especially if you’re a fish and seafood lover — is what will keep you coming back.

The smokehouse fish board is a good bet for first-timers. The board offers up a generously appointed selection of five Smokehouse specialties: traditional cold smoked salmon, smoked North Carolina rainbow trout, hot smoked pepper salmon, Great Lakes smoked whitefish salad and the restaurant’s signature “salmon candy,” a delectable honey hot smoked salmon from the American Northwest. The varieties of fish come with two toasted bagels, onions, capers and a chunk of cream cheese. If you and a friend are looking for a hearty snack, the smokehouse fish board is a solid — and delicious — value at $24.

Other winners include a succulent crab cake sandwich, velvety macaroni and cheese (also available with crab), and a crusty and filling fried shrimp po’ boy sandwich.

If there’s a knock on The Tavern at Ivy City Smokehouse, it’s the service. While generally friendly, the restaurant sometimes seems understaffed. We’ve had to track down servers for the check on more than one occasion and drinks could be refreshed more quickly, but that’s a relatively small quibble when weighed against the high quality and fair value of the food. Ivy City Smokehouse is a worthy anchor to a rapidly improving dining landscape in the neighborhood. 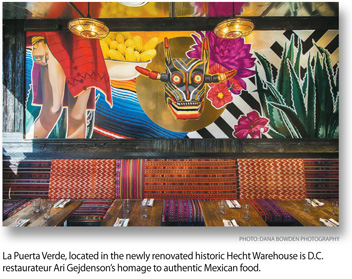 Translated as “the green door,” La Puerta Verde is located in the newly renovated historic Hecht Warehouse, and its décor manages a deft nod to both a traditional Mexican hacienda and its Ivy City roots. Traditional talavera tiles and vibrant colorful murals coexist with repurposed cargo containers and original warehouse columns. But the menu, of course, is pure Mexico.

Order the guacamole to start and you’ll find not the typical bland mush, but a cool and piquant version enlivened by lightly grilled avocados and a big blast of lime and cilantro. We give a thumbs-up for the house-fried chips, too — warm, crisp and dense with a light dusting of salt. If this appetizer doesn’t awaken your taste buds, they suffer from severe narcolepsy.

Two other excellent starters are the tamal de cerdo — a fat, tender (not at all dry) pork tamale draped with queso fresco and a zesty tomatillo sauce. The elote loco — grilled corn on the cob with spicy citrus mayo, chili and cojita cheese — had us fighting for the last few remaining kernels.

The tacos are also a treat and a decent value at $9 for three. We suggest mixing it up — the perfectly tender tomato and chipotle braised chicken tacos make subtle use of the often overpowering chipotle chile, and the cumin-crusted fried cod with mango slaw offers a satisfying textural and flavor contrast. If you’re feeling adventurous, try the lengua, or tender braised beef tongue. 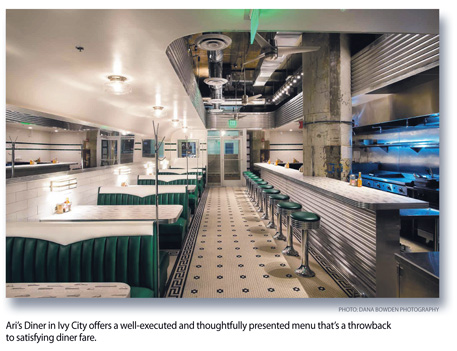 On several visits to La Puerta Verde, we’ve never had issues with the service and can wholeheartedly recommend this charming eatery for your next Mexican culinary adventure.

Shifting gears to breakfast (and can’t we all agree that Washington still suffers from a dearth of appealing breakfast options?), we also enthusiastically suggest Ari’s Diner in Ivy City. Another of Gejdenson’s creations, Ari’s gets the retro diner aesthetic right, with gleaming evergreen-and-white tile, comfortable booths and individual seats at the counter.

It also gets the menu right. Simple without being boring and traditional without being slavish, the food choices at Ari’s are well-executed and thoughtfully presented.

We’re particularly partial to the biscuits and gravy — flaky and piping hot buttermilk biscuits topped with pepper-flecked sausage gravy, served with a side of fluffy scrambled eggs.

The spinach and feta omelet is healthy and generously portioned, and the avocado toast with mashed avocado, olive oil, pickled onion and sesame seeds was a curiously addictive side dish.

Unfortunately, service was slow — a bit surprising considering the impressive attentiveness at Gejdenson’s Mexican restaurant around the corner. Part of the reason we frequent diners is the convenience and expedience. But this spot is still a solid bet for a tasty and simple breakfast or lunch, and we’re betting that Ari’s Diner will remedy the pacing problem. We’re already looking forward to next time.

The Tavern at Ivy City Smokehouse