Home The Washington Diplomat July 2017 With Medical Background, Wife Aims to Educate Americans on Her Country, Not the State

“When people in this country ask me where I am from, I tell them Georgia,” said Anna Matsukashvili. “They often think I’m from Atlanta or some place else in that southern state.”

But Matsukashvili and her husband, recently appointed Georgian Ambassador David Bakradze, are from the country that stands at the intersection of Europe and Asia bordered by the Black Sea, Turkey, Russia, Armenia and Azerbaijan. While many Americans might not be that familiar with the former Soviet republic that’s home to Caucasus Mountain villages and Black Sea beaches, Georgia recently celebrated its 25th year of relations with the U.S. — and both Matsukashvili and Bakradze want Americans to know that their geo-strategically placed country embraces the West. 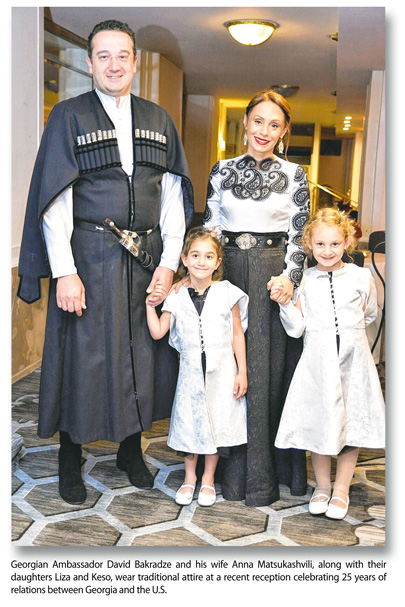 For example, she noted that Georgia contributes the largest percentage of NATO troops per capita in Afghanistan.

“I want to introduce my country to the American people,” said Matsukashvili. “I want them to know about our culture and diversity.”

Georgia has long sought to join NATO and the European Union as a hedge against Russian hegemony. Those fears have been exacerbated by Moscow’s support for the separatist regions of Abkhazia and South Ossetia, which occupy about 20 percent of Georgian territory, following a brief war with Russia in 2008 (also see “Regional Hostilities Unnerve Georgia as Ex-Soviet Republic Turns 25” in the June 2016 issue of The Diplomat).

Prior to coming to Washington last year, Bakradze served as state minister for European and Euro-Atlantic integration, as well as ambassador to Greece and Serbia.

Matsukashvili and her husband did in fact travel to the U.S. state of Georgia for the first time on June 17 to see the Georgian national rugby team play the U.S. team (they had already beaten Canada). “We have a good and strong team; we follow them,” she said.

Matsukashvili noted that the small country of 3.7 million, about the size of South Carolina, is also represented athletically by Zaza Pachulia, a successful basketball player who is now with the Golden State Warriors. He is remembered for wrapping himself in Georgia’s handsome red-and-white flag when the Warriors won the 2017 NBA Championship.

“My husband played basketball semi-professionally for five years. He is 6’5,” Matsukashvili said. “But Pachulia is much taller. He was 6’8” when he was only 13 years old!”

Instead of basketball, however, Bakradze went into the world of diplomacy, serving in the press office of the Georgian president in the 1990s shortly after the country’s independence from the Soviet Union.

Likewise, Matsukashvili took a different career path than the one she set out on, studying dentistry but deciding it wasn’t for her. Matsukashvili’s father was a surgeon and her mother was a dentist. Although she graduated from the Georgia Medical University in Tbilisi with an honors degree in dentistry, she never worked a day in the profession.

“Everyone told me, ‘Dentistry was a good job for a woman. It’s easier to find a job or you could work with your mother and more easily have a family.’ But I found it boring,” Matsukashvili told us. “I like emergency medicine better.”

She ended up switching fields and worked with the U.N., medical associations, pharmaceutical companies and foundations, including the Open Society Foundations established by George Soros, where she managed a project that promoted healthier lifestyles for teenagers fighting heroin addiction.

Prior to coming to Washington, she managed antibiotic and ophthalmology products for the pharmaceutical company Humanity Georgia and headed an initiative to improve the well being of Georgians living in Greece.

Matsukashvili, who is fluent in Georgian, Russian, German and English, met her husband at a party hosted by a mutual friend. “He came with his camera and started to take pictures of me. Then he told me that he would share the photos with me but he lost them. I found him positive, warm, open. He invited me to tea and we were married a half-year later. We were 31 and 32.”

Photography is one of the hobbies they share. The other one is cooking. “We host a monthly dinner party where we tutor our guests in making Georgian dumplings from scratch…. One of the best ways to introduce your country is with cuisine diplomacy,” she said.

“Georgian cuisine has the influences of the Chinese and the East and the Europeans to the West. You could say it is one of the first natural fusion cuisines. We have our own spices and use some Indian ones. We love walnuts. It is not unusual to have an appetizer, main course and dessert all with walnuts or walnut sauce,” she added, noting, “There are no Georgian restaurants in the Washington area but there will be. One is opening soon around 11th and M Streets. It’s called Supra.” 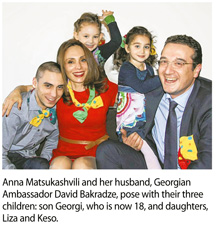 Wine diplomacy is also a big part of the culinary heritage of Georgia, which is often called the “cradle of winemaking.” An ancient method of winemaking involving underground clay pots has been used for 8,000 years and is now part of UNESCO’s Intangible Cultural Heritage list. There are over 500 unique varieties of grapes in Georgia, and many families make their own wine. Matsukashvili’s father owned a winery in Kakheti, a premier winemaking region. An increasing amount of Georgian wine is being exported not only to its neighboring countries, but also to the U.S., with Georgian wines available locally at Whole Foods, Walmart and many smaller wine and liquor shops.

According to food columnist Dave McIntyre’s wine review in The Washington Post on Aug. 29, 2015: “Georgia’s wines are exciting. The country offers everything a modern wine geek could ask for: native vinifera grape varieties grown almost nowhere else; modern-style wines that capture those grapes’ fruity flavors; and wines fermented the way Georgians have done it for centuries, offering us a taste of the past. It doesn’t hurt that the old style has become trendy. Even better: The wines are not expensive.”

Georgia is also known for its special folk singing style in polyphonic, or simultaneous, voices. “There are as many as seven to 10 different parts being sung at the same time. My grandfather was one of these folksingers and so were his two brothers,” Matsukashvili told us. “We are a very musical country. There is a piano in every home and music education which encourages the playing of instruments. I graduated from music school and play the piano.”

Matsukashvili said she hopes her children will continue this musical tradition. Their son Georgi is 18 and studying in Estonia, soon to arrive to study at the University of Maryland. He will continue his interest in business, communications and marketing. Their daughters, Liza and Keso, are 6 and 5. “Since our children attended a British International School at home, their English is very good,” she noted.

Looking back on her life of being married to a diplomat and living in Finland and Greece, and having children along the way, Matsukashvili said she took the changes in stride. “It is interesting meeting different people with different customs and cuisines.”

At the same time, she admits diplomacy isn’t always easy. “It’s different from the start. I had to interrupt my career and start a new life. It’s difficult to imagine but I was so in love,” she said. “Where love is, you can manage your every day routines.”