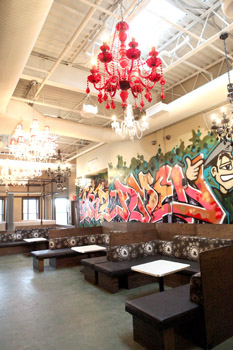 Mixing serious food with equally serious partying, Policy in the U Street corridor features a main eating area downstairs and an upstairs lounge decked out in bright graffiti murals by local artist Andrew Funk, garish-colored chandeliers, private nooks and high ceilings that give it a more open feel than the dining room.

This time last year, D.C.’s thriving U Street corridor saw several additions to its rapidly expanding night scene. A once thriving entertainment district, the area had suffered more than 30 years of decline after the riots prompted by the death of Martin Luther King Jr. ravaged the area. But increasing real estate prices in Washington refocused attention on the diverse neighborhood, where the city’s fringe theaters, jazz clubs and bohemian shops had already settled. This wave of hipster hotspots has created a vibrant new destination for serious diners and partiers alike— and one establishment, Policy, happily caters to both.

On its first anniversary, Policy restaurant and lounge — the inspiration of former AOL software engineer, turned party promoter, turned restaurateur Omar Miskinyar — is going strong. It has withstood the test of trendiness and has emerged as a viable option both as a dinner destination and a late-night hangout.

In creating Policy as a “resto-lounge,” Miskinyar recognized early on the benefit of taking the food as seriously as the party. The policy at Policy is “truth, liberty and love” — truth in using the best quality ingredients, liberty to explore all cultures, and love and passion to drive the food.

To enforce this policy, Miskinyar brought in chef Brian Murphy, who came to the venture with a serious culinary pedigree, having worked in notable kitchens such as Ruppert’s, Palena and the now defunct Le Relais under chef Yannick Cam. Though trained in classical French cuisine, Murphy’s approach to Policy’s menu harkens back to his time spent watching his mother cook, when he learned the benefits of basing dishes on seasonal, locally available ingredients.

The menu at Policy consists entirely of small plates. Although at first glance this may seem limiting, there are such a variety of choices — and some of the dishes are of sufficient size — that you do not miss the sometimes meaningless distinction between first and second plates. Murphy looks far and wide for his inspiration, realizing the second component of Policy’s motto: “liberty to explore all cultures.” He borrows ingredients, spices and cooking styles from across the world to create dishes ranging from the quite traditional grilled hanger steak to the almost eccentric (but very delicious) lobster-mascarpone crêpes with carrot-ginger coulis and candied grapefruit. 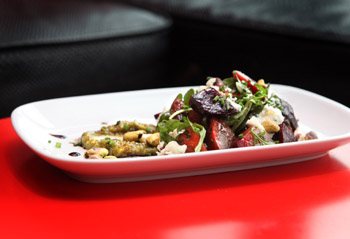 The small plate approach works to diners’ advantage here as there are so many interesting options to try. The menu, which changes seasonally but retains some of the very popular items, offers a nice balance of meats, seafood and some really superb vegetarian options. In fact, two of the most intriguing choices are meatless: The first is a rich and soothing heap of sautéed forest mushrooms served over a boat of rich truffled Asiago polenta and a sweet fig vin cotto. In the second, red lentils are curried with more coconut milk that might be suggested by the name and served with fried cauliflower dumplings and pea shoots. While Indian in origin, this is a distinctly and deliciously original take on the dish.

One of the first things you’ll notice in studying the menu is the construction of the dishes. Murphy has built multi-dimensional creations to appeal to all the senses, blending taste, texture and visual aesthetic. The Tandoori spiced scallops are a good example. Each firm white scallop is reddened with the spice and surrounded by pale, smooth, curried cauliflower cream, golden raisins and slightly crunchy Brussels sprout petals.

There isn’t much pasta on the menu, but the few choices are standouts. The beet and goat cheese ravioli is surprisingly (though not disappointingly) mild. Served with wilted spinach, chive butter and crispy celery root, it’s rich and interesting, though it might benefit from being served warmer. The sweet potato gnocchi served with pecans, Danish blue cheese and sugar snap peas is heartier and equally good.

But if there was one dish that tempted us to try Policy in the first place — and one dish that has prompted us to return — it is the Madras curry lamb sliders. This plate of two perfectly shaped little burgers — dripping with melted gorgonzola and mint pesto — is sheer perfection, with a garnish of thinly pickled cucumber rounds. They are so good that the only possible criticism is why not three or four?

The sides are another fine group of dishes from which to choose, offering vegetarian diners additionally satisfying alternatives. The french fries are perfect — skin on, with a deep golden crunch, accompanied by a respectable truffle mayo. Green beans are lightly stir-fried with sesame and ginger for an Asian-inspired dimension, and even traditional Brussels sprout haters will warm to these roasted treasures in their delicious pairing with pieces of smoky bacon. Meanwhile, the cauliflower florets are roasted with pine nuts and golden raisins in an interestingly Mediterranean fashion.

After a few plates, it’s evident Policy sticks to its truth pledge. The consistent quality of the dishes is notable. After several visits and a sample of virtually everything on the menu, we have yet to find a poorly prepared or unsatisfying dish. Desserts are equally well prepared, though somewhat less interesting than the savory main dishes. And with only four dessert choices, the temptation may be to go back and have just one more plate of those sliders. But you might not want to miss the apple cranberry crisp, which is served with a very nice house-made caramel swirl ice cream. Another fun choice is the chocolate S’mores cheesecake — rich and dense, it may remind you of the inside of a chocolate Easter egg. 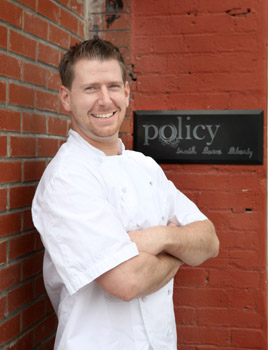 For Policy, chef Brian Murphy created a menu based entirely on small plates, borrowing ingredients, spices and cooking styles from across the world to create dishes ranging from the traditional to the pleasantly eccentric.

As a lounge, Policy’s drink menu is, not surprisingly, long. It offers classic and original cocktails, some decent wines, interesting beers and bottle service. Policy’s motto is interpreted by three signature cocktails: the truthtini, a green tea-lemongrass martini; the libertini, a mango caipirinha; and the lovetini, a chocolate martini with cinnamon lollipop.

While food and drink are the main attractions at Policy, the interiors are also quite striking and create interesting stages for Murphy’s culinary creations and Miskinyar’s legendary parties. To transform the space, Miskinyar chose the D.C.-based CORE design firm, which has delivered exceptional interiors for a number of local eateries, including Potenza and AGAINN, as well as the understated Café du Parc at the Willard InterContinental and the charming train station-inspired design for Brasserie Beck. CORE clearly had fun with Policy. Playing off a diner theme in the main eating area, the concept is updated and tricked out with red vinyl booths and bar stools, black pressed-tin ceiling panels and millwork, and low lighting resembling an opium den out of a bordello or perhaps just a diner on steroids.

At Policy, you eat on the first floor, party on the second. Follow the yellow brick road (i.e. a golden-yellow industrial staircase) linking the dining room to a second-floor lounge. Framed with bright graffiti murals by local artist Andrew Funk, the sleek, minimalist seating, garish-colored chandeliers and little private nooks (that can be reserved and have a bottle minimum) define the space. Higher ceilings and lighter colors give it a more open feeling than the dining room, but on a crowded evening it can seem very tight. The overall design though enhances the feeling that you are visiting two different establishments, not just two different rooms.

Though a newcomer to the restaurant business, Miskinyar has good instincts about what people want — a characteristic he seems to have communicated to his staff, who are both able and agreeable. If Policy can continue to honor its commitment to good food while serving its more celebratory patrons, it seems likely it will enjoy many more anniversaries to come.