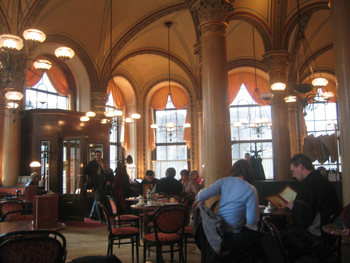 The new display at the Austrian Cultural Forum, which studies this period through the eyes of the Vienna café, isn’t drastically aesthetic, nor does it exhibit a climate of fashionable despair or sophistication. In fact, there’s a bit of blandness to the whole thing. One could easily go through the entire collection of historical artwork and photographs lined throughout the Austrian Embassy within 30 minutes and not miss a beat.

Café Central in Vienna remains a social hub today, but in fin-de-siècle Austria, cafés and coffeehouses truly were centers of power and intelligentsia, as evidenced in a historical exhibition at the Austrian Cultural Forum in Washington.

But then, this is more of a thesis exploration than an art show. The display and its accompanying lectures were put together by a group of art history PhDs and other academics. There are no earth-shattering revelations or groundbreaking research. The forum itself acknowledges as much, noting in a description of the exhibit that “the importance of the café in the literary culture of Vienna at the turn of the century is well established.”

Still, the display is somewhat entertaining and eye-opening, if only in the way most photographic documentations of significant cultural moments in history are. The show focuses on the city’s famous literary cafés and their role in social life at the turn of the century, as glimpsed through copies of pencil drawings, watercolors, vintage displays and photographs dating to the 17th century.

But these were no ordinary cafés for sipping the occasional coffee. No mass-produced corporate chains or hazelnut iced lattes here. These were glittering centers of power and intelligentsia.

The primary focus of the collection is the turn of the 19th century, a time when famous writers, politicians and other “thinkers” regularly gravitated toward famous coffeehouses to pontificate and socialize. It was an era when every new hotel had a coffeehouse in its plans, when each café was elaborately decorated, and when every social class had a shop within reach. Polished counters and plush seats were filled every day with people from all walks of life, from chess-playing debutantes to beer-sipping workers to discoursing artists.

Glancing at these moments in café history, when coffee shops as we know them were an inconceivable product of the far-off future, the exhibit does become a bit fascinating. Back then, billiards, upscale seating and smartly dressed waiters were mainstays. The cafés remained popular gathering spots for the literary crowd into the 1920s and 1930s, when the most famous, Café Herrenhof, was equipped to host up to 1,000 guests. The coffeehouse was an art unto itself.

It was an art that, sadly, came to a sudden and lasting halt with Nazi invasions, foreign occupation and a post-war recovery that took many decades to complete. The Viennese café reappeared gradually, but in modern form. In the 1960s, Vienna had its first branded café — a chain of new coffee shops with matching logos, architecture and menus. By the time many of the old cafés were reopened in the late 1900s, the modern world was at the dawn of computer technology and the hurried pace that came with it.

Today, the refurbished spaces pay tribute to the old era — a mural here, a photograph there — but, as it turns out, the place to glimpse the old art of the Viennese café is in fact right here at the Austrian Cultural Forum in Washington.