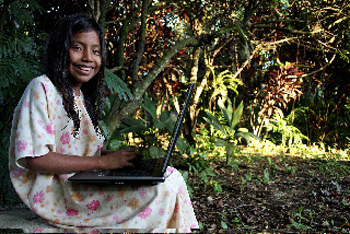 This year is a big birthday for Mexico — and the celebrations are going to be felt far and wide — both in Washington, D.C., and throughout Mexico’s neighbor to the north.

All throughout 2010, festivities will mark the bicentennial of the nation’s independence as well as the centennial commemoration of the Mexican Revolution, which initiated the country’s transition to modern statehood.

Lauro Alberto Victoria Coello’s “Identidad y Desarrollo (Identity and Development)” demonstrates how economic investment in the Chiapas region of Mexico has allowed children to grow up acquainted with new technologies.

Experts say that the coincidental occurrence of both anniversaries will generate a huge focus on Mexico and draw individuals from everywhere to examine the country’s pre-Hispanic roots, its evolution over the last 200 years of independence, as well as its future.

Two centuries ago in September 1810, Miguel Hidalgo y Costilla, a small priest in the town of Dolores, called for the people of Mexico to rise up against Spain, sparking the beginning of what would become the Mexican War of Independence. It would then be another 100 years before the Mexican Revolution of 1910 plunged the country into a civil war that ultimately gave rise to the 1917 constitution, which forms the basis of today’s government.

The largest Independence Day festivities will take place in Mexico City, where beginning in September, the capital city will be festooned with the national colors of red, white and green as Mexican flags fly around every corner.

Among the highlights: an exhibition featuring iconic Mexican contemporary artist Gabriel Orozco at the Museum of Modern Art in New York City; shows on the pre-Colombian cultures of the Aztecs and Olmecs in Los Angeles; the display “Fiery Pool: the Maya and the Mythic Sea” that travels to Massachusetts and then Texas; and a comprehensive exhibit on ancient Mexican masterpieces at the Art Institute of Chicago.

Such a cross-country, cross-cultural partnership hardly took shape overnight — rather, it was the result of a massive coordination effort. The Mexico Cultural Institute in D.C., billed as one of the most important cultural and societal centers outside of Mexico itself, partnered with a range of local institutions and organizations to put on an extensive series of performing and visual arts, music, film, gastronomic showcases and conferences. In addition, the Embassy of Mexico formed a bicentennial committee made up of prominent Americans in various business, artistic and political circles throughout the country to spotlight the enduring bilateral relationship.

Amid the flurry of activities being staged across the United States and Mexico, the events here in the Washington area stand out as some of the most diverse anywhere.

The Trust for the National Mall will honor Mexico at this year’s Luncheon and Ball on the Mall in May, as a recognition of “the shared ideals of liberty, justice and democracy that underpin Mexico’s independence in 1810 and the American Revolutionary War of Independence of 1776,” according to an embassy press release.

Also on the National Mall, the Smithsonian’s massive Folklife Festival, which runs from June 24 through July 5, will showcase Mexican culture, coinciding with a major display at the Smithsonian’s Anacostia Community Museum that details “The African Presence in México: From Yanga to the Present” (also see review in the January 2010 issue of The Washington Diplomat).

Cinema takes center stage during the Hola Mexico Film Festival, which makes its D.C. debut at Landmark’s E Street Cinema from May 27 to June 1. The films range from serious contemporary fare such as “Los Que se Quedan (Those Who Remain)” about the impact of migration on families and villages left behind by loved ones traveling north for work, to comedic dramas like “Sexo, Pudor y Lágrimas (Sex, Shame and Tears)” about the universal battle between the sexes.

“By screening the very best of Mexican cinema, the [festival] will take you on a journey through Mexico’s past, present and future,” event organizers say. “Each film reflects the maturity and complexity of authentic Mexican culture, bringing forth unique story lines and characters that the audience will never forget.”

The best of Mexican musical and performance talent will literally take the stage at the Kennedy Center as part of the popular annual Prelude Festival later this fall, during which time the National Museum of American History and the Library of Congress will also present seminars discussing the Mexican Revolution.

Finally, the Mexican Cultural Institute is offering its own array of cultural programming, including the current show “Elizabeth Catlett in Mexico.” Catlett was actually a native of Washington and 1935 graduate of Howard University who — inspired by the cultural and political transformations of post-revolutionary Mexico — moved to Mexico City in 1947 and joined the artist’s collective known as the Taller de Gráfica Popular (Workshop of Popular Graphics). The group advocated for visual art to be used as a catalyst for social change, a mission that appealed to Catlett and her desire to portray the history and reality of African American women.

Other events at the institute include the exhibits “Paul Strand: the Mexican Portfolio” and “Rethinking Tradition: Survey on Contemporary Design from Mexico,” as well as a year-long conference series titled “Bilateral Relations: Undercurrents of Creativity.”

The Mexican Cultural Institute itself is an exhibit of sorts, having undergone an extensive restoration to commemorate the 100th anniversary of this historic mansion and landmark along 16th Street. As part of that renovation, beginning this fall, Mexican artists and curators will be invited to stay in the revitalized space through an artist-in-residence program.

As the “Mexico 2010” organizing committee states on its Web site, “These celebrations are not just about remembering important dates; they are about reviving the values and ideals that shaped our nation. The goal of the organizing committee is to give a modern meaning to our history.

“The history of which we speak is not exclusive but inclusive. All Mexicans are part of our history and, therefore, everyone throughout the country and all those who live outside of Mexico’s borders have the right to interpret it freely.”

And on a lighter note, the committee also points out that in addition to reflection, 2010 will be a year for celebration, calling the bicentennial and centennial milestones “a big fiesta that all of society should make its own.”