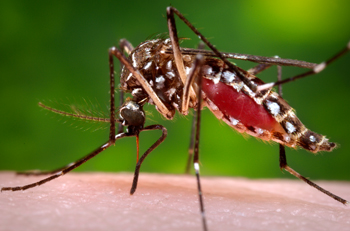 Not since the AIDS outbreak of the early 1980s has a virus as mysterious and scary as Zika frightened so many people throughout Latin America and the Caribbean.

In early February, the World Health Organization designated Zika a public health emergency of international concern after the mosquito-borne disease, first considered relatively benign, came to be implicated in the outbreak of microcephaly — the birth of babies with extremely small heads and undeveloped brains. It’s also been associated with other serious birth defects and Guillain-Barré syndrome, an immune system disorder that sometimes leads to a fatal form of paralysis.

A female Aedes aegypti mosquito acquires blood from her human host, biomedical photographer James Gathany of the Centers for Disease Control and Prevention. Aedes mosquitoes spread dengue, chikungunya and yellow fever, as well as the Zika virus that is now ravaging the Western Hemisphere.

At last count, Zika had been reported in 31 countries and territories, most of them in the Western Hemisphere. In a particularly cruel twist of fate, three of the worst-affected jurisdictions are Brazil, already in the midst of a corruption scandal that threatens to topple President Dilma Rousseff; violence-plagued El Salvador, which has the world’s highest homicide rate; and Puerto Rico, where a $73 billion fiscal deficit is rapidly decimating the U.S. commonwealth’s public health system.

“Zika is not a new Ebola,” declared Luiz Alberto Figueiredo Machado, Brazil’s ambassador to the United States. “It is, of course, a matter of concern, given its association with microcephaly in newborn babies. More data and standardized protocols are needed before this link — first discovered by Brazilian doctors — between the virus and such cases can be fully clarified.”

Figueiredo, in a Feb. 4 opinion piece for Americas Quarterly online, insisted that “at this point, there is no reason to cancel business or pleasure trips, but extra precautions must be taken by pregnant women, who should talk to a doctor before traveling to the most affected areas.”

No doubt the ambassador is concerned — among other things — about the devastating economic impact Zika could have on tourist arrivals during this summer’s Olympics in Rio de Janeiro.

When The Washington Diplomat interviewed him for our January 2016 cover profile, Zika barely registered on anyone’s radar. At that time, all the talk centered on Brazil’s plummeting GDP and a series of devastating political scandals that have shaken the reputation of Rousseff and her predecessor, Luiz Inácio Lula da Silva.

But only four months later, Brazil has nearly 5,000 suspected cases of microcephaly associated with Zika, of which 641 have been confirmed. The epidemic has alarmed governments throughout the hemisphere and was the subject of a March 15 Capitol Hill symposium co-sponsored by Washington’s Inter-American Dialogue and the O’Neill Institute for National and Global Health Law.

“This is a major health incident in the history of Brazil. We face a very serious problem for which scientific knowledge is far from sufficient,” Wilson Savino, director of Rio’s Oswaldo Cruz Institute, recently told the Guardian, comparing widespread ignorance about Zika to that of HIV — the virus that causes AIDS — in the 1980s.

“Back then, the scientific and medical community did not know what was going on until many people had died and considerable research had been undertaken,” said Savino. “Then it turned out to be a global health issue. In Brazil, although we have identified the Zika virus, we don’t know much about it compared with dengue or yellow fever. The degree of ignorance is comparable to what we faced 32 years ago.”

Like Ebola, which takes its name from the Congolese river near where a 1976 outbreak of that virus occurred, Zika is named after a forest in Uganda where the disease was identified in 1947. It is believed to have arrived in Brazil in 2014, possibly with visitors to the World Cup. An estimated 1.5 million people worldwide are now infected with Zika infection and the number is growing fast, though nobody knows how widespread the disease is because there are no symptoms in about 80 percent of cases. In the rest, symptoms are similar to other mosquito-borne infections such as dengue, and can include fever, skin rashes, conjunctivitis, muscle and joint pain, malaise and headache. 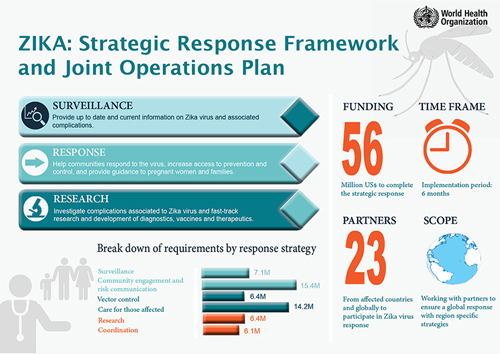 For women of child-bearing age, however, the consequences can be potentially devastating, with a recent study in the New England Journal of Medicine reporting that nearly 30 percent of women who tested positive for Zika and underwent ultrasound exams carried fetuses with “grave outcomes,” including fetal death.

“We’re taking this very seriously,” said Román Macaya, Costa Rica’s ambassador in Washington, “even though the impact in our country has not been that severe compared to what’s been happening elsewhere.”

Indeed, Costa Rica has reported only a dozen cases of Zika, eight of them locally transmitted. Yet Zika’s presence was severe enough for the Atlanta-based Centers for Disease Control and Prevention to include Costa Rica — by far Central America’s most popular tourist destination — in an alert urging pregnant women not to travel there.

“This is very recent, and since our tourism industry peaks from December to February, we don’t have statistics on how this might affect future travel plans,” Macaya, a chemist and biochemist by training, told The Diplomat, adding that, “we are not going to comment on their recommendations.”

Because there is no treatment or vaccine for the virus, efforts to combat Zika have focused on stopping the spread of mosquitos. In mid-February, Macaya accompanied a four-member team from George Mason University’s Center for Biodefense and Infectious Diseases to Costa Rica, where they conducted research on vector-borne diseases in collaboration with local scientists.

“Our Ministry of Health has been educating communities on how to control the risk of Zika, or at least mitigate it by eliminating breeding areas or any receptacles that have standing water, and by spraying larvicides,” the ambassador said. “Very little is known about the life cycle of Zika, and we want to get on top of this early.”

It’s a very different story in El Salvador, whose 6.4 million citizens — many of them impoverished — are squeezed into an area the size of Massachusetts. Complicating the problem is El Salvador’s total ban on abortion and the fact that it suffers from Latin America’s highest rates of teenage pregnancy and sexual violence.

El Salvador also ranks as the world’s most violent country; in 2015, its homicide rate came to 104 per 100,000 inhabitants. In their initial response to the Zika outbreak, reported the Guardian, health officials simply advised women in this deeply Catholic country to delay getting pregnant until 2018.

Francisco Altschul, El Salvador’s envoy to the United States, said that even though 178 of the 5,620 suspected cases of Zika in his country involve pregnant women, 35 of them have already given birth without complications.

“There have also been 130 cases of Guillain-Barré, of which 70 percent are OK now, so in general, we could say that the tendency is going down,” he told us. “The first week of January, we had 1,094 cases reported, and the first week of March, we had only 99 cases. So we’re clearly seeing a downward trend.” 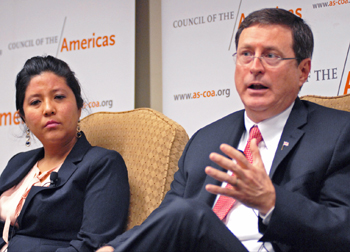 Costa Rican Ambassador Román Macaya, right, speaks about the threat of Zika to Latin America and the Caribbean as part of a panel organized by the Inter-American Dialogue. At his side is Ana Ayala of Georgetown University’s O’Neill Institute.

“We have mobilized the population to control mosquitos, prioritizing 47 municipalities throughout the country in our first national campaign against the Aedes aegypti mosquito larvae,” the ambassador said, adding that a second campaign would begin April 5 and that nearly 300,000 people will benefit from the effort. “This structure of municipal committees has proven very effective, because you mobilize the population on the spot.”

He said the embassy has not received calls from Salvadorans in the Washington, D.C., area worried about Zika.

“Right now, I think they’re more worried about the security issues,” he said.

In Colombia, more than 20,000 Zika cases have been confirmed — about 2,100 of them in pregnant women. The disease is particularly rampant along the country’s tropical Caribbean coast, home to vast banana plantations and widespread poverty.

“The health of our citizens is a top priority for the government, so Colombia’s health authorities are working hard around the clock to diminish the effects and control the spread of the Zika virus,” Juan Carlos Pinzón, Colombia’s ambassador to the United States, told The Diplomat in a prepared statement. “The ministry has reiterated the importance of personal protection, including the use of mosquito nets, insect repellant and clothes that cover the maximum area of skin possible, and they have also expressed the importance of proper prenatal care for women who show signs of the virus as their pregnancies are considered high-risk.”

Pinzón, formerly Colombia’s defense minister, said that during the February visit of Colombian President Juan Manuel Santos to Washington, he and top U.S. officials agreed to accelerate investigations into the range of health impacts of the Zika virus and on joint research into the development of diagnostics, vaccines and vector control tools to control the virus.

But when it comes to Venezuela, Colombia’s neighbor to the east, cooperation with the United States amounts to zero. No diplomatic relations exist between Caracas and Washington, and Colombian Health Minister Alejandro Gaviria Uribe accuses Venezuela — which admits to nearly 17,000 cases — of hiding the full extent of its Zika epidemic.

“I hope that President [Nicolás] Maduro will not continue putting policy and ideology before the health and life of Venezuelans,” said Olivares, insisting that the Maduro government lacks the necessary supplies — from condoms to mosquito repellent — to effectively combat the outbreak and reduce unwanted pregnancies.

Olivares, chair of the subcommittee on health in Venezuela’s National Assembly, estimates that between 400,000 and 500,000 Venezuelans have contracted Zika. In fact, Venezuela’s Ministry of Health stopped issuing weekly health bulletins over a year ago, Reuters recently reported, meaning there is no public historical data or geographic statistics for unusual fever outbreaks.

“If the government doesn’t recognize the magnitude of the crisis, it won’t act on it,” warned Olivares, “and the number of Zika cases is going to increase.”