Home More News Sudan’s US envoy, forced to resign, tells us ‘the situation is disastrous’

When veteran Sudanese diplomat and educator Nureldin Mohamed Hamed Satti arrived in Washington back in July 2020, he was welcomed as Khartoum’s first ambassador to the United States in 23 years.

Yet Satti’s mission proved to be short-lived. On Jan. 31, the 75-year-old former United Nations official was forced to resign as a consequence of the military coup back home that has plunged Sudan into a political and humanitarian crisis.

“The situation is disastrous,” he told The Washington Diplomat last week via Zoom. “Politically, economically, socially, really from all points of view, Sudan is on the path to collapse.”

With 45 million people and a land area 2.7 times that of Texas, Sudan is Africa’s third-largest country in size. It had ranked as the largest until 2011, when the largely Christian south seceded from the predominantly Muslim north and formed the independent nation of South Sudan.

Yet Sudan has been wracked by civil war and instability for much of its history. For nearly 30 years, the country was led by President Omar al-Bashir, an unforgiving dictator and convicted international war criminal who was finally overthrown in April 2019 after massive protests by ordinary Sudanese furious over emergency austerity measures and a sharp currency devaluation.

Since then, the power-sharing Sovereign Council—an uneasy alliance between the military and civilian groups—has ruled Sudan. But on Oct. 25, 2021, the military under Sudan’s top general, Abdel Fattah al-Burhan, dissolved the government, declared a state of emergency and temporarily put Prime Minister Abdalla Hamdok under house arrest.

“I opposed that coup, and for that reason I am no longer ambassador,” Satti told us. “I thought it was better that I leave my post, and I informed the US government of my decision.” 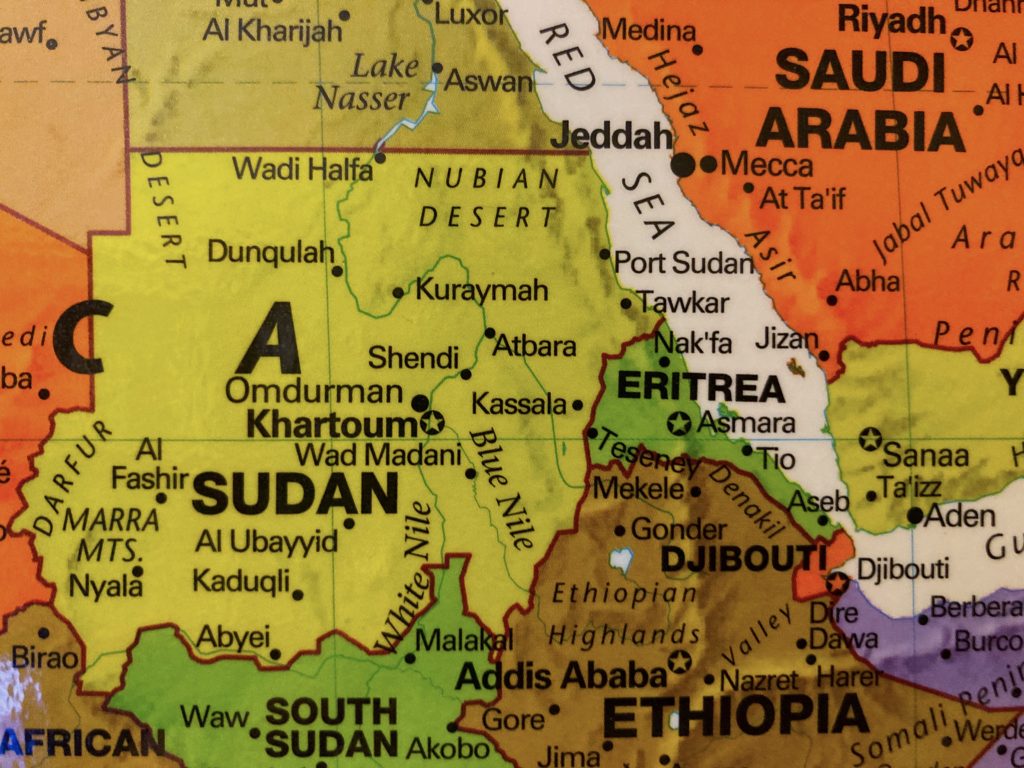 As CNN explained in an article a day after the coup, “under the deal struck in July 2019 [by the African Union in Addis Ababa, Ethiopia], the military council would be in charge of the country’s leadership for the first 21 months. A civilian administration would then rule the council over the following 18 months. But it has proved to be a shaky alliance. The triumphant mood that swept the nation after Bashir’s removal soured, with tensions between the two sides mounting as they fought to main control over the nation’s future.”

For now, Satti’s chargé d’affaires is running the Sudanese Embassy on Massachusetts Avenue. It’s unclear what will happen next, with the military in full control—especially given that the Biden administration does not recognize the current regime in Khartoum (Hamdok was later reinstalled as prime minister, but resigned on Jan. 2, 2022, in the face of continuing street protests).

“There’s a tug of war, a confrontation between the military de facto government and the people in the streets. That’s why we’re in this mess now,” Satti explained. “This will continue unless the military decides to listen to the voice of reason and negotiate with civilians.”


Satti knows a thing or two about negotiating. A former French literature professor at the University of Khartoum, he served as Sudan’s ambassador to France (with accreditation to Portugal, Switzerland and the Vatican) and was also Sudan’s permanent delegate to UNESCO.

After joining UNESCO in 1996, he became director of the agency’s Nairobi-based Regional Program for Emergency Education and Culture of Peace, as well as UNESCO representative to the Comoros, Djibouti, Ethiopia, Madagascar, Mauritius, Somalia and Tanzania.

In 2002, Satti—who has extensive experience in mediation and conflict resolution—was named UN deputy special representative for Burundi, where he helped end that country’s civil war. 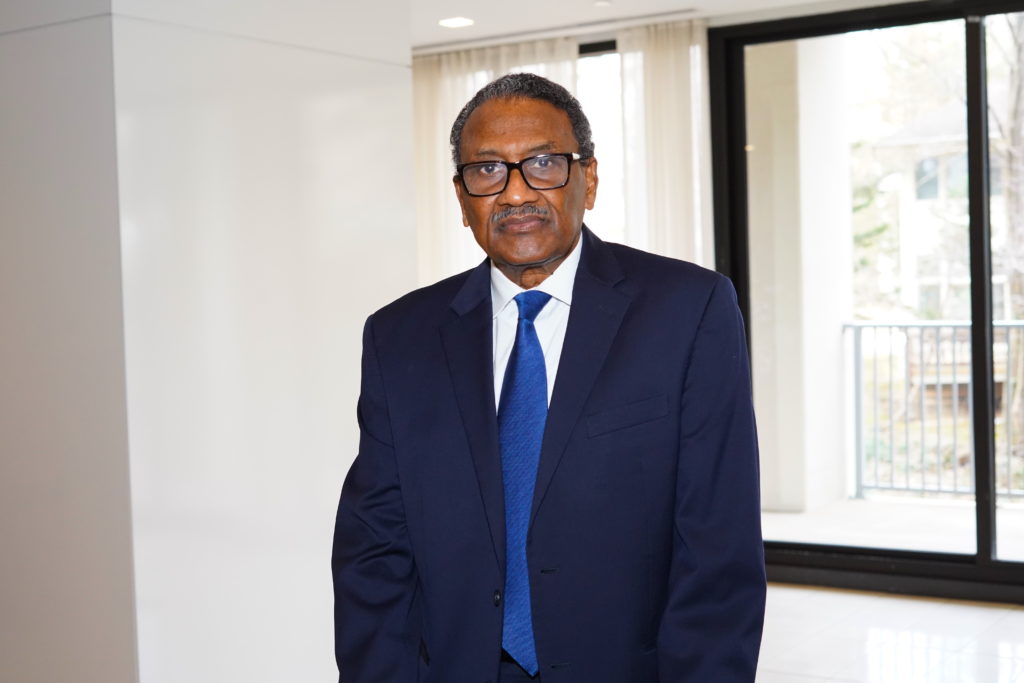 There hasn’t been a US resident ambassador in Khartoum since 1997, and it was only after Bashir’s overthrow that Washington agreed to accept a Sudanese ambassador in the United States, he said.

“That’s why I came here some 18 months ago,” he said. “But now we are back to a situation where there is diplomatic representation but not at the ambassadorial level.”

In December 2020, the Trump administration took Sudan off from the US State Department’s list of terrorist-supporting states as part of a deal in which Khartoum agreed to normalize diplomatic ties with Israel. At the time, only three other countries were considered state sponsors of terrorism: Iran, Syria and North Korea, though Cuba—which the Obama administration removed from the list in 2015— was put back on during Trump’s final week in office.

Satti said Sudan’s removal from that blacklist had a “huge impact” on bilateral relations.

“It opened the way for Sudan to normalize relations with the US, to benefit from financial and political support, and also to begin the process of debt forgiveness,” said the former ambassador, noting that his country had been an international pariah for decades. “We were on the right track with the World Bank, the IMF, the African Development Bank and the Paris Club. Within the next two years, most of Sudan’s debt would have been renegotiated and probably forgiven. That would have lifted a huge burden from the Sudanese economy. We were on the path to full normalization, but now all this is finished. We are back to square one.”

Rahel Getachew, founder of Afrolehar Branding, a Washington-based cross-cultural PR and communications firm, said that “even though Sudan is currently in turmoil, it offers great opportunities for US investment in natural resources such as gold, aluminum and nickel, as well as agriculture.”

She noted that Sudan has more than 150 million hectares of arable land, and also boasts enormous potential for solar energy. “Within its limits, Sudanese embassies around the world should not only work on political engagement but also on economic diplomacy to educate investors and the private sector about the agriculture, transport and manufacturing sectors in Sudan,” she said.

Sudan’s Israel dilemma: Full normalization, but at what cost?

Another potential bright spot for Sudan could be normalization and trade with Israel—a country it once considered a sworn enemy. Sudan’s support for the Palestine Liberation Organization was well-documented over the years. In fact, it was in Khartoum where the Arab League famously met in 1967 and adopted the “three no’s”—no peace with Israel, no recognition of Israel, and no negotiations with Israel.

So it’s more than ironic that Sudan, of all countries, agreed to normalization with the Jewish state. In fact, Hamdok was supposed to come to Washington a year ago to sign the Abraham Accords—joining the United Arab Emirates, Bahrain and Morocco in making peace with Israel.

“I know because I was part of this. I was the link with the administration,” said Satti. “Unfortunately, he was unable to come because of scheduling issues. Afghanistan was occupying the administration, so the signing was postponed to October. But it didn’t happen, and then we had the coup. That changed everything.”

Even so, the Sudanese military started normalizing ties with Israel on its own, a relationship that was jumpstarted in a 2019 meeting between former Israeli Prime Minister Benjamin Netanyahu and al-Burhan. Secret meetings continue, as evidenced by a Feb. 9 report in Times of Israel revealing that a top official of the Sudanese government is currently visiting Tel Aviv. 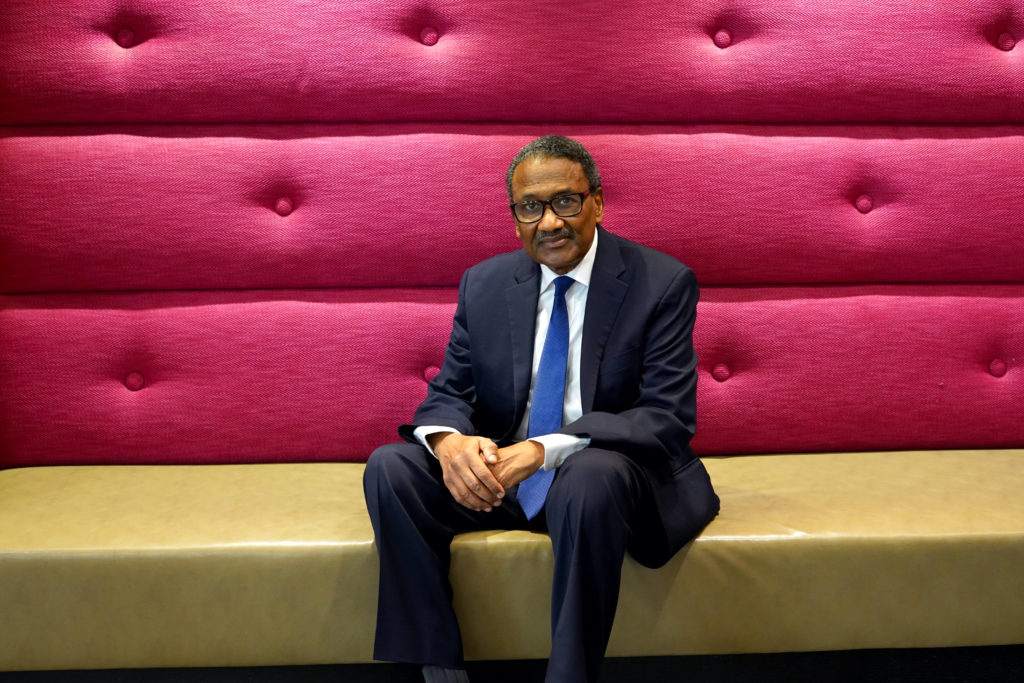 But such an approach can backfire for Israel, Satti warned.

“As I’ve always told Jewish organizations here, it’s in the interests of Israel to come to Sudan through the front door, with the people of Sudan—and not the military of Sudan, which for me is the back door. This relationship will not be sustainable, because there will be no stability in Sudan under military rule,” he said.

“My advice to Israel is to reconsider its position and try to mend fences with the Sudanese people and not with the military,” he continued. “A uniquely military and security-based normalization with Sudan does not fulfill the requirements of the Abraham Accords, which is about partnership, cooperation, people-to-people relations and peace.”

“I am a retired UN employee and I have my own resources,” he said. “There are special arrangements for ambassadors and senior diplomats who wish to remain in the US for some time, upon recommendation from the State Department.”

And what will he do, we asked Satti, now that he’s no longer ambassador?

“I will continue to resist the military regime. It’s my duty,” he replied. “That’s going to be my new job.”