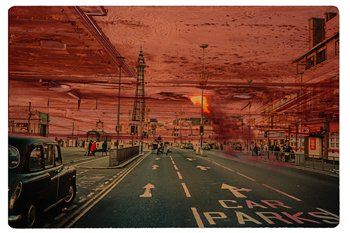 The first thing visitors see as they enter Ahmed Mater’s “Symbolic Cities” photo exhibit is a glowing antenna, lit from within by white cathode lighting, hanging at the entrance.

The sculpture, simply called “Antenna,” is a tribute to the artist’s early days in Saudi Arabia, where he would frequently stand on the rooftop of his childhood home and lift an antenna toward the sky in the hopes of catching a signal so that his family could watch television.

“The antenna is a visual embodiment of Mater’s work,” Carol Huh, the assistant curator of contemporary Asian art at the Freer and Arthur M. Sackler Gallery, told The Washington Diplomat. “It represents the idea of receiving and sending out signals to better understand the world through art.”

It is also the gateway through which the viewer enters Mater’s world and embarks on a dreamlike journey from past to present.

Photos: Courtesy of the Artist and Athr

Ahmed Mater reflects on the sweeping social changes redefining his native Saudi Arabia in works such as “Crisis” from the series “Ashab Al-Lal/Fault Mirage: A Thousand Lost Years.”

Mater has come a long way since fidgeting with antennas on his rooftop — as has his rapidly changing homeland. Currently based in Jeddah, Mater is a physician as well as an artist who works in photography, video, installation and other media. He entered medical school at the age of 19 and became interested in photography while shooting X-rays at the hospital where he worked.

“Symbolic Cities,” which Mater shot over three years, explores the impact of urbanization and economic change on the landscapes of his native Saudi Arabia through long-form photography and video. The exhibit consists of large-scale photographic works, shot in color, as well as two short films and a collection of smaller photographs.

Viewers traveling through the exhibit begin with “The Empty Land,” a series of 15 photographs that depict parched Saudi landscapes devoid of human presence, abandoned public works projects and discarded oil barrels — objects that represent the abandonment of traditional values and agrarian ways of life in the face of modernization.

“These images represent places in the country that are scarred by successive waves of industrialization,” Huh said. “The overall tone is very de-saturated and empty.”

From there, the journey takes a sharp turn into the past with a video depicting the traditional stone-throwing ritual during the hajj, the yearly Muslim pilgrimage to Mecca. The ceremony is a reference to Abraham, who famously threw stones at three pillars to cast out the devil.

“There are no people in the video, but you can hear the crowds in the background,” said Huh. “The effect is to slowly lead you into one of the most significant and restrictive cities in the world.”

Mecca, also known as the “Symbolic City,” is an important focal point of the exhibit. The annual pilgrimage, depicted in several photographs, is in many ways a reflection of the holy city’s larger trajectory from tradition to urban modernity.

“As the exhibit progresses, we move more and more into the heart of political centralization and economic urbanization,” Huh told The Diplomat.

This transformation is clear in many of the photographs. “Between Dream and Reality,” a large color photo of a billboard painting covering a construction site in Mecca, vividly captures the collision between the city of the past and the commercialized one it is becoming.

“Many historic sites and features in Mecca are being destroyed to make room for modern buildings, and workers often put up billboards and paintings of the city in the past to cover up the destruction,” Huh explained. 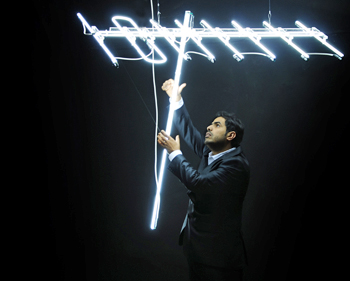 Other photographs that capture this juxtaposition of past and present include “From the Real to the Symbolic City,” which portrays an overhead view of Mecca covered in a smog of construction dust, with the city’s iconic clock tower peeking out from a corner of the fog.

“Over the years, I’ve been following Mecca as it changes, and I recognize what is different: huge buildings and cranes,” Mater, who first visited the city as a small boy, said in a 2012 interview with Creative Time Reports.

This theme of urban construction is seen time and again in the exhibit. “Human Highway” depicts hundreds of hajj pilgrims traveling through a large, V-shaped structure as they participate in the stone-throwing ritual in Mecca, while a vast field of cranes stretch out in front of the city’s Great Mosque in “Golden Hour.” In “Artificial Light Construction,” a public space surrounded by towering scaffolding shows the full scale of urbanization through the eyes of the city’s foreign construction workers.

Toward the back of the exhibit is a digital film of a drummer at a traditional wedding who appears to be in a trance as he steadfastly beats on his drum with both hands. The film, called “Ghost,” was shot in an area southwest of Mecca and, like “The Empty Land,” conveys the marginalization of traditional values in a rapidly evolving society.

“Ghost” also captures another major recurring theme in the exhibit: the idea of the mirage or hallucination, and the contrast between dream and reality. “Ashab Al-Lal/Fault Mirage: A Thousand Lost Years,” a collection of nine miniature photographs, delves into this theme.

The photos, which were taken from the artist’s private archives, show the impact of Saudi Arabia’s all-important oil industry through scenes of daily life in Riyadh, Saudi Arabia’s largest city, as well as Saudi Aramco oil compounds to the east of the city.

The unique format of the series, in which the miniature photos are set inside a row of wooden viewing sliders instead of being mounted on the wall, lends the images a certain dreamlike quality.

“The sense of mirage in these images keeps the journey going; it keeps you wanting to search in the desert for this ideal city,” Huh said.